The tale has been shared by a so-called friend who is asking for advice on what to do on forum Mumsnet. 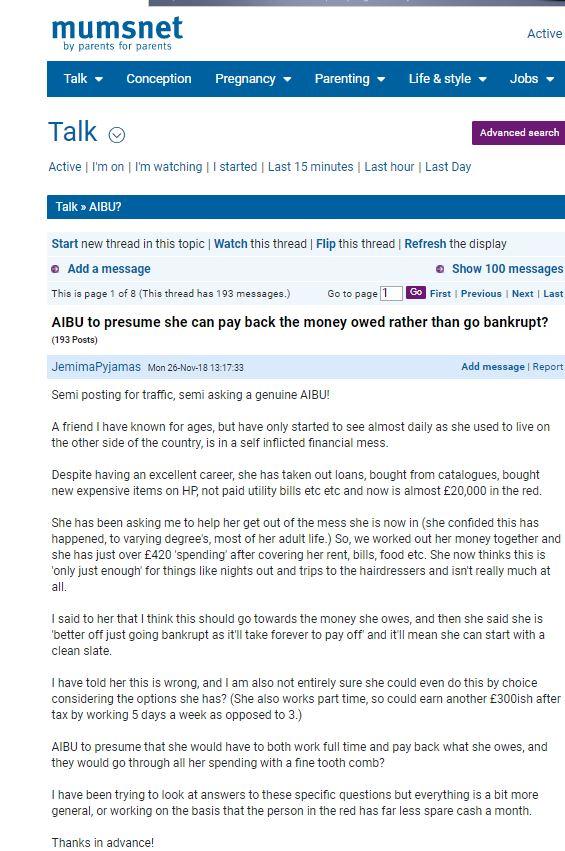 JemimaPyjamas, as the poster calls themselves, writes: "A friend I have known for ages, but have only started to see almost daily as she used to live on the other side of the country, is in a self inflicted financial mess.

"Despite having an excellent career, she has taken out loans, bought from catalogues, bought new expensive items on HP, not paid utility bills etc etc and now is almost £20,000 in the red."

JemimaPyjamas continues that together they calculated that the friend has just over £420 left each month after rent, bills and food, which she apparently thinks is "'only just enough' for things like nights out and trips to the hairdressers".

"She see's things like wine, meals out, shellac nails, getting her grey roots covered etc more like essentials than luxuries and hence the £420 a month leftover, after generous food and bills allowances, is, in her view, too little," writes JemimaPyjamas.

What happens when you go bankrupt

You can apply to go bankrupt online but you will have to pay a £680 fee for the privilege.

Bankruptcy usually lasts a year and it can take the pressure off you because you don’t have to deal with your creditors and the money you owe can usually be written off.

But if your income is high enough, you’ll be asked to make payments towards your debts for three years – you may also have to sell your home and some of your possessions to cover the debts.

If you are approaching pension age even your pension can be use to pay off loans.

Plus, it will be more difficult to take out credit while you're bankrupt and your credit rating will be affected for six years.

Despite having this extra cash leftover from her part-time job as a GP, JemimaPyjamas writes that the friend thinks she is "better off just going bankrupt as it'll take forever to pay off".

But many forum users point out in response that bankruptcy isn't an easy option. One user said: "Bankruptcy is the nuclear option. It will affect her life a great deal.

"No one will stop her from going bankrupt, but equally she shouldn’t imagine it’s the “easy” option."

Another wrote: "My experience renting with a partner who still had a bankruptcy on record was that some letting companies flat out refused us.

"And some would only consider us if everything went in my name (and my single income meant we could only be assessed for very poky little places) and we had a guarantor – not everyone would be able to do this."

HOW TO CUT THE COST OF YOUR DEBT

While someone else commented: "If the debt is unmanageable she may be best to default and go into either a debt management plan, an IVA, or bankruptcy. In this she needs support from a debt advice charity like StepChange.

"Doing any of these will not "wipe the slate clean". They will do enormous damage to her credit rating. She may not be able to have a credit card, mortgage, car loan etc for at least six or seven years."
Bankruptcy is often considered as a last resort for people in debt as it can have long-reaching consequences on your finances.

Often the first thing you should do is to contact all of your lenders to see if they'll agree to more affordable repayment plans.

You can also try and shift your debts onto a 0 per cent balance transfer card as then you'll only be servicing the debt rather than price interest rates.

If you're struggling, here's how to get out of debt in eight simple steps – and get advice for free.