LOS ANGELES — For the audience at the Microsoft Theater, it was an absolute delight, a bonus treat to wrap up a fun and lively evening. For the TV production team, Stevie Wonder’s unscripted, 45-minute performance was bound to be a headache.

Commanding the stage at his keyboards to close out the taping of the Grammys’ Motown tribute concert in February, Wonder gleefully went well beyond his allotted time, improvising on the fly as he rolled through song after song after song.

Editors stuck with the task of trimming a marathon event into a two-hour broadcast may have grumbled, but Wonder’s happy-go-lucky performance was a fitting finale to a festive, colorful evening in L.A., where much of the Motown Records family convened to mark the label’s 60th birthday.

Two months after the taping, Detroit’s richest musical legacy will be front and center in prime time, as “Motown 60: A Grammy Celebration” airs at 8 p.m. Sunday on CBS.

“How can you not want to pay tribute to one of the greatest record labels in the world?” says Ken Ehrlich, the longtime Grammy-show producer who has also spearheaded the Recording Academy’s televised tributes to the Beatles, Bee Gees and others. 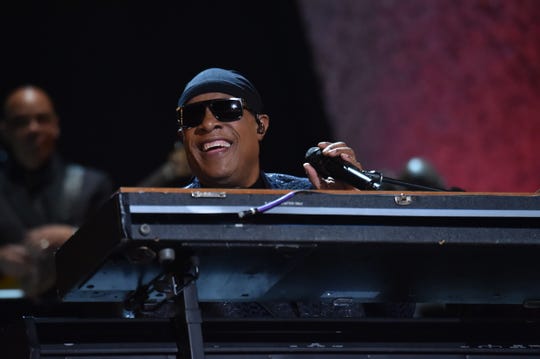 Stevie Wonder performs during "Motown 60: A Grammy Celebration" at Microsoft Theater on Feb. 12, 2019, in Los Angeles. (Photo: Lester Cohen, Getty Images for The Recording A)

The young guests show well alongside the old-school stars, including Ciara with an assertive stamp on Rick James’ “Superfreak” and sister duo Chloe x Halle evoking a classic Motown spirit with their tastefully synchronized choreography on “Please Mr. Postman.”

Motown founder Berry Gordy Jr., 89, is a star of the ceremonies in his own right, holding court in the front row and eventually stepping onstage to reflect on the “legacy of love” generated by a label that set out “to make music for all people.”

Heavily promoted on CBS in recent days, the show is the second Detroit-related Grammy tribute to air this year, following last month’s “Aretha! A Grammy Celebration for the Queen of Soul.”

And it’s the latest in a storied tradition of Motown anniversary commemorations — a custom that started with the historic “Motown 25” special. Suzanne de Passe, the longtime Gordy associate who produced that 1983 show, was enlisted by Ehrlich as a Motown consultant for the new program.

Tellingly, a recap of the ’83 special during Sunday’s show avoids footage of Michael Jackson’s iconic moonwalk, as controversy about the late pop star continues to swirl in the wake of “Leaving Neverland,” a documentary alleging child sexual abuse. Indeed, Jackson and his brothers have little presence on the 60th-anniversary show.

Held at the Microsoft Theater on Feb. 12, the “Motown 60” taping came two days after a Motown tribute live on the Grammy Awards — a Jennifer Lopez segment that was slammed by many viewers and critics, who questioned why a Latina artist was chosen to represent one of the most cherished black cultural legacies in American history.

Lopez’s medley of classic Hitsville tunes — which was emphatically defended by Robinson, Gordy and other Motown figures — will air again as part of the “Motown 60” show. (Her performance was initially intended to be a Jackson 5 tribute, but that plan was scrapped as the “Leaving Neverland” controversy simmered, according to people close to the production.)

The two-hour program weaves history and archival footage amid the live performances, digging into Motown lore to serve up stories about the making of the Miracles’ “Shop Around,” the Supremes’ battle for a hit song, and the racist resistance faced by the early Motortown Revue tours in the South. 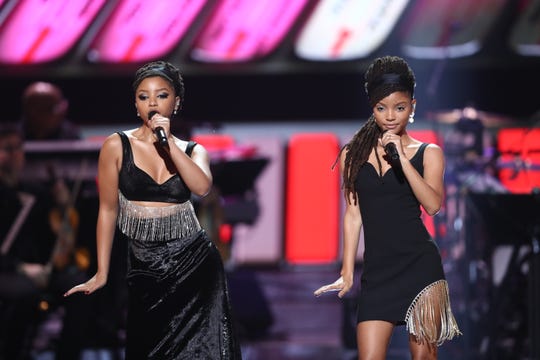 Included are clips from the forthcoming documentary “Hitsville: The Making of Motown,” a Gordy-backed project that will debut on Showtime later this year. A planned April 19 premiere, announced during the Grammy taping and confirmed by others at the time, was delayed.

Robinson makes for an affable co-host alongside Cedric the Entertainer, who performs in several pre-filmed sketches — including as a Detroit disc-jockey character — and leads an interactive challenge dubbed “The First Four Bars.” Part karaoke, part name-that-tune, the segment plays off Gordy’s insistence that a hit song must grab listeners instantly, and selected audience members — at least some of them seemingly authentic — rise to the occasion when the house band cues up various song intros. (Some of the night’s clunkier renditions were left on the cutting-room floor.)

During the rehearsals and taping in February, Robinson seemed to be having the time of his life. A friendly star who never seems to tire of Motown’s yesteryears, he was very much in his element as he spent the day immersed in the label’s legacy. And preaching the universality of Motown was very much on his mind: Late into the previous night, he’d sat up in bed, typing out a long, impassioned statement defending Lopez’s Grammy performance. 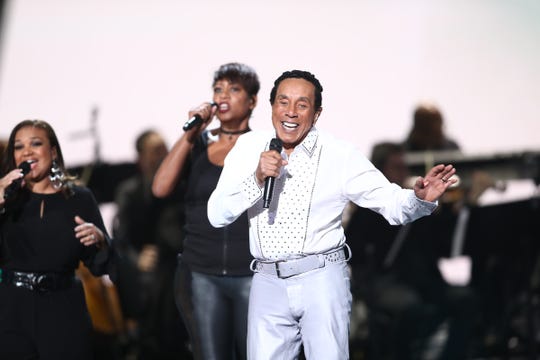 It was the week of his 79th birthday, and Robinson’s silky tenor was as sublime as ever, including an a cappella collaboration with Pentatonix on “Shop Around.” At rehearsals that day, staffers across the theater stopped, looked up from their laptops and production notes, and watched intently as the lovely guitar line from “The Tracks of My Tears” set up another Robinson performance.

The “Motown 60” performances were guided by a crack house band helmed by veteran L.A. music director Rickey Minor, who skillfully managed the dexterous bass lines of Funk Brother James Jamerson and — in the case of Thelma Houston’s showstopping “Don’t Leave Me This Way” — the late Henry E. Davis. 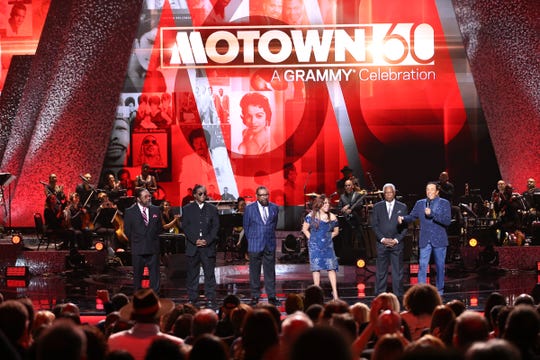 In some ways, the night often felt like a Detroit homecoming in the heart of L.A., as much of the label family — including a contingent from the Motown Museum — converged on the bustling theater.

Still, some key folks were absent, including the Four Tops’ Duke Fakir and the Temptations’ Otis Williams. Ehrlich said “it was a conscious decision” to leave out groups that didn’t feature all-original members.

And Martha Reeves — who flew in for several days of rehearsals and performed “Nowhere to Run” in a medley devoted to Motown’s women — is axed from the edited version of the show airing Sunday, based on a screening of the program provided to the Free Press.

But the spirit was fun and upbeat inside the Microsoft Theater that night. Wonder exemplified the mood when he chose to do things his own way, saying to heck with the restraints of a tightly structured TV taping and turning his segment into a lengthy musical party.

What had been plotted as a 12-minute segment was stretched by Wonder into a protracted concert-within-the-concert that had the house band working hard.

At 45 minutes, his performance was far too long for the televised version. So viewers Sunday will get smatterings of Stevie throughout the program — about 13 minutes’ worth — including an opening “Sir Duke” and in-memoriam segment set to his performance of “Never Dreamed You’d Leave in Summer,” paying tribute to the sadly growing list of departed Motown heroes.

Wonder wasn’t the only star that night to go off script. John Legend, at the piano to celebrate Marvin Gaye, asked for a do-over because “I messed up a little bit” while performing “Mercy Mercy Me” and “What’s Going On.” Producers obliged. 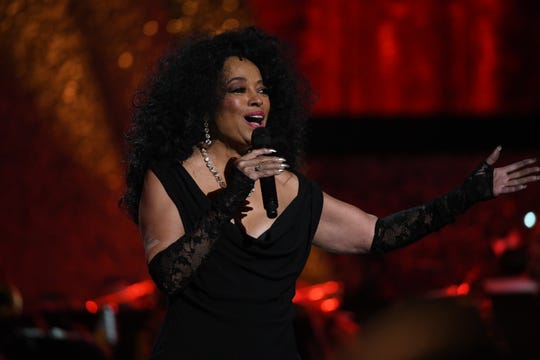 Diana Ross, singing a selection of material from her 1970s films, turned her performance into a serenade of old flame Gordy. Ross was elegant, earthy and affectionate as she made her way down to the Motown boss’s seat for a closeup rendition of Billie Holiday’s “My Man” — Gordy’s face plastered with a smile before they ended with a hug.

But that hadn’t been the plan: As it had been worked out in rehearsals that afternoon, Ross was to have led Gordy up to the stage to finish the song there and set up his speech. Ehrlich and his team frantically pow-wowed with Ross after the miscue, ready to redo the segment, but ultimately opted to leave the moment of charming spontaneity intact.

For Gordy’s part, he seemed proud and gracious as he soaked in the night’s proceedings. Speaking late in the show, he paid tribute to the folks who had helped his “wonderful fairy tale come true” — including “those brave, unsung heroes of the Motown family in those early days who had the courage to follow me down roads that didn’t even exist.”

Looking across the venue, an auditorium packed with adoring fans and six decades’ worth of Motown colleagues, Gordy wrapped up: “All I want to say tonight is: I love you.”

“I love you!” came the holler back from the crowd.