A mother-of-four has defended her decision to breastfeed her youngest daughter until she was nine – and said that other mothers she knows are ‘fine’ with it.

Sharon Spink, from Sherburn-in-Elmet, North Yorkshire said the extended nursing has created ‘a really close bond’ between her and daughter Charlotte, who she says has enjoyed good health because of the milk’s nutrients.

She appeared on ITV’s This Morning alongside journalist and mother-of-three Rachel Haliwell, who argued that Sharon could have fostered the same bond by cuddling or reading stories to her child, rather than pursuing an extended nursing period.

But Sharon, 50, said that she never forced nursing on her daughter, and that Charlotte always made the decision herself adding ‘she is the most independent little girl I know’.

The schoolgirl ‘chose’ to stop taking her milk eight weeks ago, weaning herself from Sharon’s breast, a decision that was supported by her.

Actor Sharon, a trained breastfeeding counsellor, has faced criticism but says that the other mothers at her daughters schools have never had an issue with her – and Charlotte hasn’t had any problems with her peers. 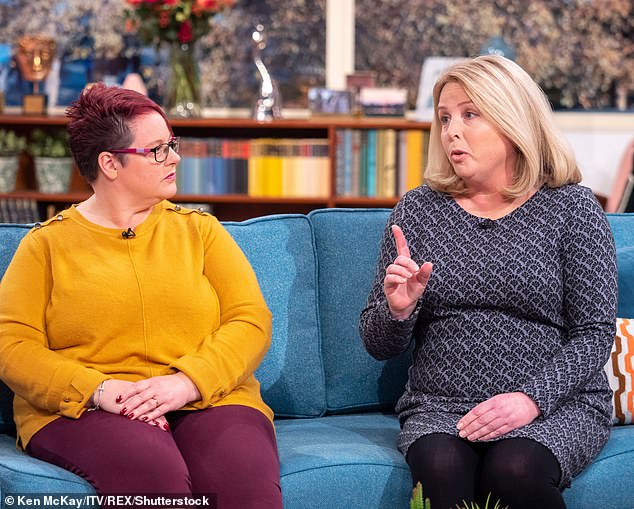 Sharon Spink, from North Yorkshire, appeared on This Morning to defend her decision to breastfeed her nine-year-old daughter Charlotte which she says has given them a strong bond. Journalist Rachel Halliwell didn’t agree with the idea of extended nursing 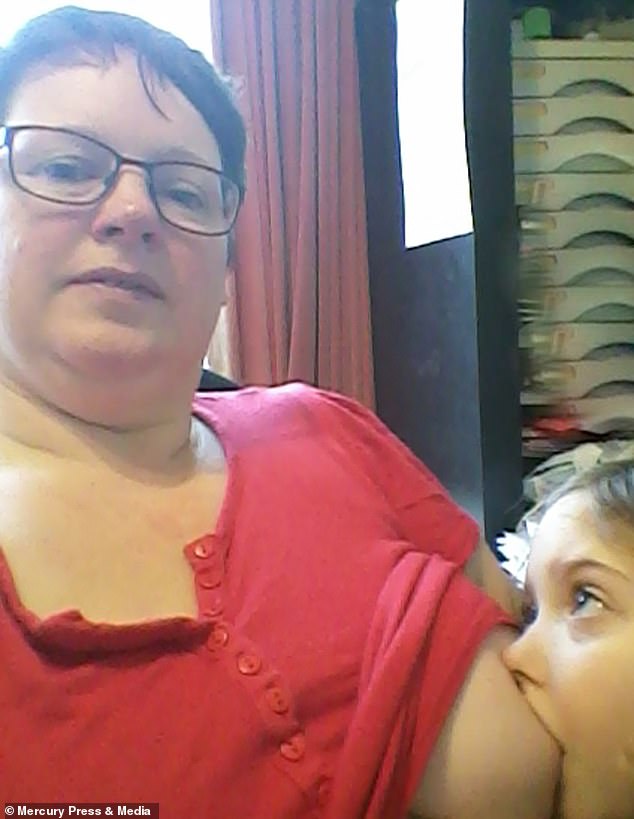 The youngster, pictured feeding, decided earlier this year that she no longer wanted what she called ‘mummy milk’, something which Sharon says is natural but that she’ll miss

Sharon said that even when her daughter began growing teeth she would just ask her to readjust.

The mother-of-four was was determined to breastfeed Charlotte after struggling to do it with her other three children Kim, 30, Sarah, 28, and Isabel, 12.

‘I don’t refuse but I don’t offer, she will just come up to me. She will have a cuddle on my knee and have a feed,’ she said on the ITV show.

What is the NHS advice for breastfeeding mothers?

The NHS guidance for getting your baby to latch onto your breast is as follows:

Remember to support your baby’s neck but not hold the back of their head.

They should then be able to take a large mouthful of breast. Your nipple should go towards the roof of their mouth.

Charlotte has since weaned herself from her breast: ‘It’s fine it was her choice, it was such a gradual process… and we were going weeks without a feed.’

But journalist Rachel Halliwell, who also breastfed her three children, didn’t agree with the extended nursing.

‘I breastfed all of my daughters until they were one, and my youngest when she was at her second birthday…

‘I had to stop and think, “Why am I still feeding her?” Because she can eat with a knife and fork, she can drink with a cup, so I had to think, “She’s my youngest, maybe I’m trying to keep her a baby and hold on to that.”

‘So it felt right at that point to stop,’ Rachel explained.

Sharon claimed that it was all Charlotte’s choice: ‘I don’t refuse but I don’t offer, it’s all her choice. She will just come up to me, she would just come and sit and have a cuddle on my knee…

Adding: ‘If she comes and asks me tomorrow then that’s fine, but nature tends to take over once they get their full set of adult teeth, their jaw shape changes, so Mother Nature is saying, “They don’t need to breastfeed anymore.”‘

However, Rachel said she felt it was doing her daughter more harm than good: ‘I think what you are doing, you talk about this great bond…

‘You can have that cuddling, or reading a book you don’t have to have her doing an act that is associated with having a baby.’ 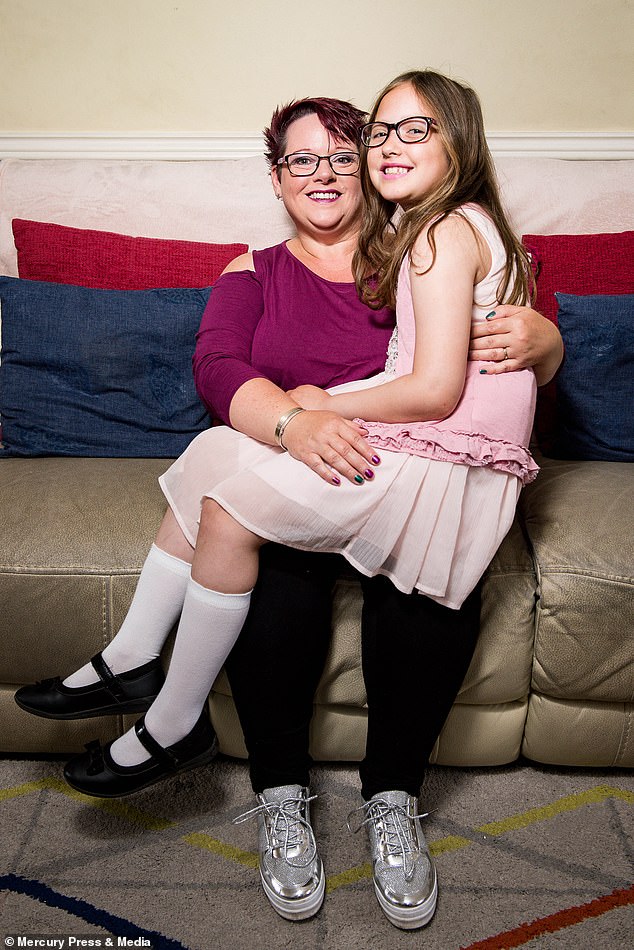 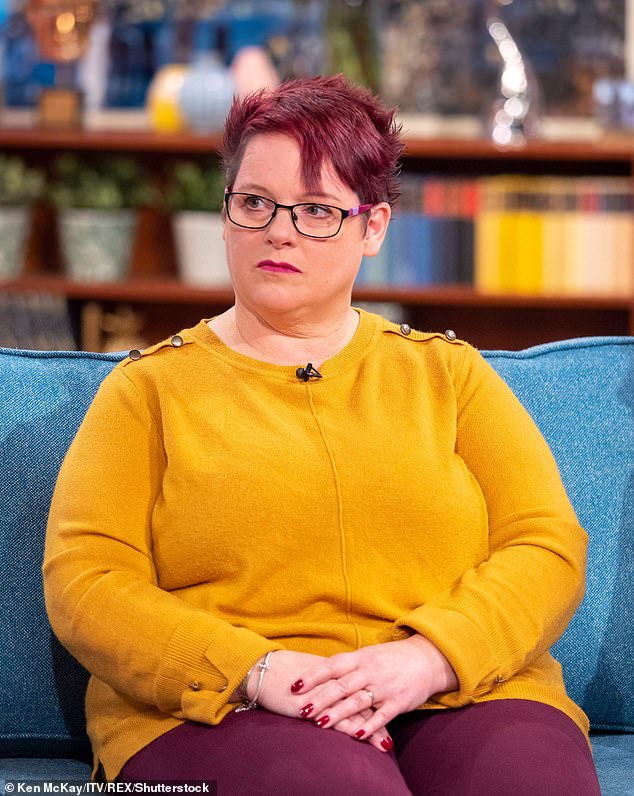 Sharon, who last year qualified as a breast feeding counsellor, was feeding Charlotte at the age of five three times a day, but that has gradually reduced and to once a month, until she recently stopped altogether

Sharon also said she believed that mothers were stopping listening to their natural instincts when it came to things like breastfeeding and potty training, choosing to follow guidelines instead.

‘Mums are stopping listening to their instincts. We are really good at knowing what they need and so are they,’ she explained.

The actor said that she believes breastfeeding Charlotte for such a long time hasn’t impacted the way she is seen by her peers.

‘I’m not sure its not the sort of thing that children talk about,’ she said.

Adding of the school mothers: ‘They are fine with it. I have not had any comments in real life, the comments have all been on social media.’

The World Health Organization recommends exclusive breastfeeding up to six months with continued breastfeeding along with complementary foods up to two years of age or beyond.

Sharon, who last year qualified as a breast feeding counsellor, was feeding Charlotte at the age of five three times a day, but that has gradually reduced and to once a month, until she recently stopped altogether.

This Morning airs weekdays on ITV at 10.30am