Why I’m pro Brussels: He’s such a fan of homegrown, super-healthy sprouts that Monty Don says no Christmas dinner’s complete without them

When I was growing up in the 1960s, Brussels sprouts had a bad press.

They tended to be soggy, sulphurous and the curse of school dinners, and served pretty much all winter.

I have not done any scientific testing but I suspect that is less true nowadays and certainly I regard Christmas dinner as incomplete without them.

The truth is that a properly cooked sprout that is still firm to the knife or bite is delicious, as well as being very healthy – sprouts are packed with vitamins A and C, are rich in folic acid, they lower cholesterol and may help prevent cancers.

In a sense sprouts are cabbages, although they do not occur naturally but have been selectively bred to produce a series of buds growing directly off the main stem inside the large loose leaves. 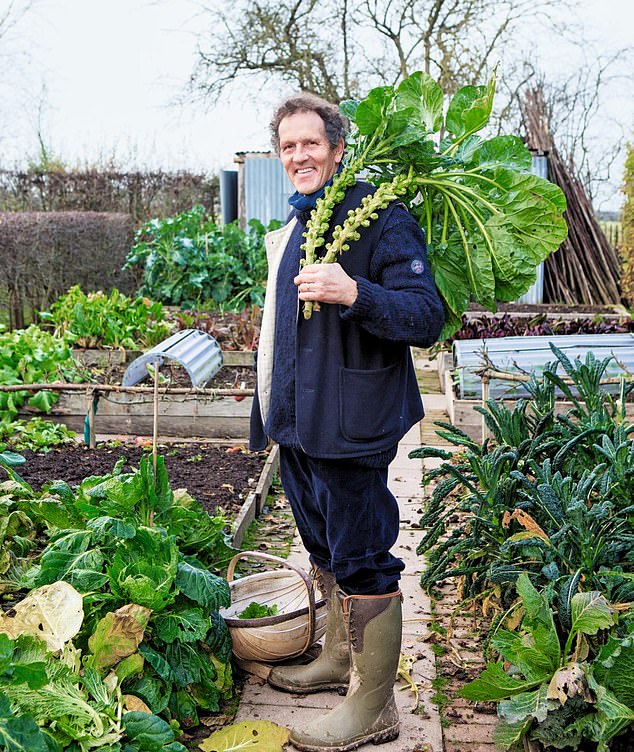 Mind you, cabbage heads do not occur naturally either and were bred from the natural cabbage, Brassica oleracea, which is native to the Mediterranean and has been cultivated for at least 2,500 years, producing loose leaves along the lines of a spring cabbage or kale.

Sprouts are thought to have been developed in Belgium – hence the name – in the 16th century and were hardly known outside France and Belgium until the 19th century when the first documented British recipe appears, from Eliza Acton in 1845.

They became popular after the First World War, so the ‘tradition’ of serving them at Christmas with the turkey is, like many cherished traditions, a relatively modern invention. No matter.

Sprouts will be a key part of the Don family Christmas, as they will in many other households in Britain.

I grow them in the same way and rhythm as my winter brassicas.

I sow seeds into plugs in March or April, potting the emerging seedlings on into 3in pots then planting them into their final position in June or July.

A native evergreen, holly is a fixture of all British landscapes.

It can grow to a tree of 80ft but also clips well to form a dense evergreen hedge or topiary. 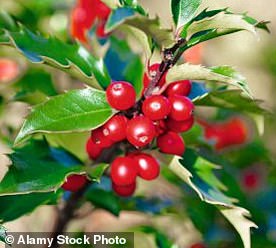 There are more than 400 species of holly, but not all carry berries.

Males don’t and females only do if there’s a male nearby – note ‘Golden Queen’ is actually male and ‘Golden King’ is female.

It may shed leaves after planting but if a mature holly drops leaves at any time other than spring then it needs a good soak.

As part of the vegetable crop rotation, they are ideal for following on after broad beans or early peas, but any well-manured soil will do.

Like all brassicas they do not like acidic conditions so mushroom compost or lime is helpful on ericaceous soil.

Ideally the ground should be composted or manured the previous autumn and limed just before planting rather than both added at the same time.

Garden compost raked into the soil before planting will help greatly.

This year I have grown only a variety called ‘Montgomery’ which are F1, meaning they are selected as being exceptionally vigorous and healthy but do not produce seed that will come true (produce a similar plant).

By and large I tend to avoid F1 seeds as they are much more expensive and in principle I like to collect seed, but with sprouts these have a big advantage in that the buds tend not to ‘blow’ so easily – that is, explode out from their tight buds before they are ready to be harvested – and are much more disease resistant.

The wider you space the plants in soil, the bigger the resulting sprouts will be, but 50cm to a metre between each plant is about right.

The gaps can be used for salad crops while the sprouts grow.

Keep the growing plants well watered and stake them before they flop under their own weight.

As autumn progresses, remove leaves that yellow or need to be thinned out to prevent the plants becoming crowded, but some should be left in exposed sites as protection for the emerging sprouts.

Cold improves the flavour down to -10ºC, so the best pickings are after the first hard frosts.

If the weather turns really cold, cut the whole stem, remove the leaves and hang it up in a cool, dark place for up to a month.