A gift from Harry? Mother-to-be Meghan sports a new ring spelling out ‘love’ – as she continues to rip up royal style rules with her quirky accessories

Mother-to-be Meghan Markle was sporting a new trinket today in the form of a ring with a very sweet message.

The Duchess of Sussex showed off a previously unseen ring spelling out the word ‘love’ as she visited the Hubb Community Kitchen in West London to meet survivors of the Grenfell Tower tragedy.

While her simple burgundy shift dress and coat in a matching shade ensured her overall look was understated, the Duchess couldn’t resists adding a playful touch with her new accessory.

The trinket is believed to be the $70 (£54) ‘jamie love ring’ from LA-based jeweller Meredith Hahn. 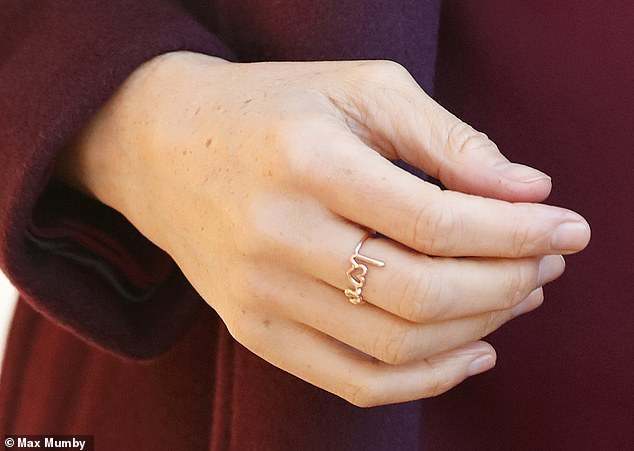 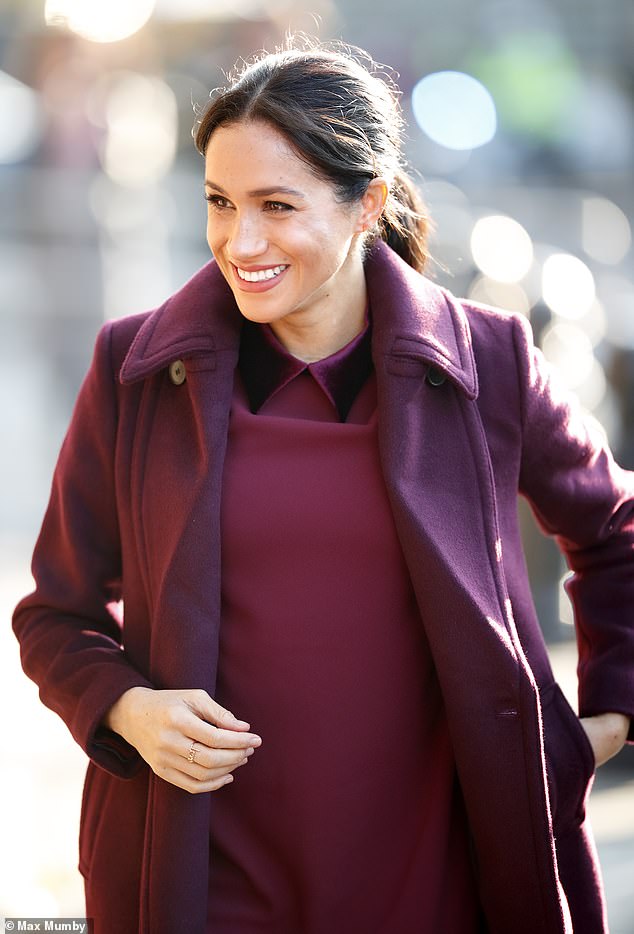 The glowing Duchess was sporting a new trinket as she arrived at the Hubb Community Kitchen in West London, wearing a burgundy dress and coat from Club Monaco

At Princess Eugenie’s wedding last month, she wore a plain, loose-fitting Givenchy coat that may have disappointed fans hoping for something more glamorous.

However, she lifted the look by accessorising with £6,000 worth of gold and diamond jewellery.

Meghan, 37, looked radiant this morning in a £282 burgundy dress with a velvet collar from her favourite Candian brand Club Monaco.

The mother-to-be’s above-the-knee dress was a rather more daring length than we’re used to seeing on the Duchess who usually favours midi skirts and dresses ending at the mid-calf. 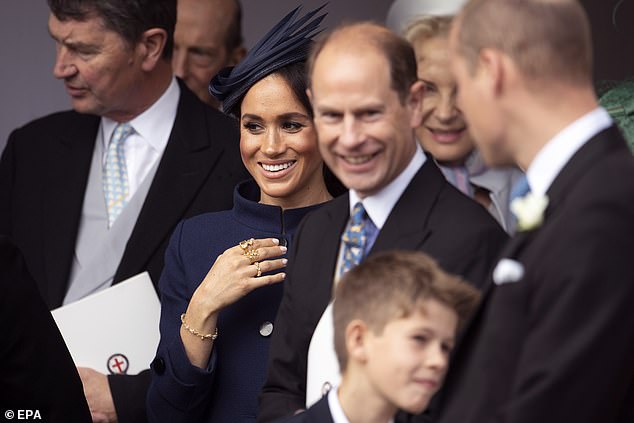 The Duchess of Sussex showcased diamond rings and a bracelet worth £6,000 by jewellery designer Pippa Small at Princess Eugenie’s wedding 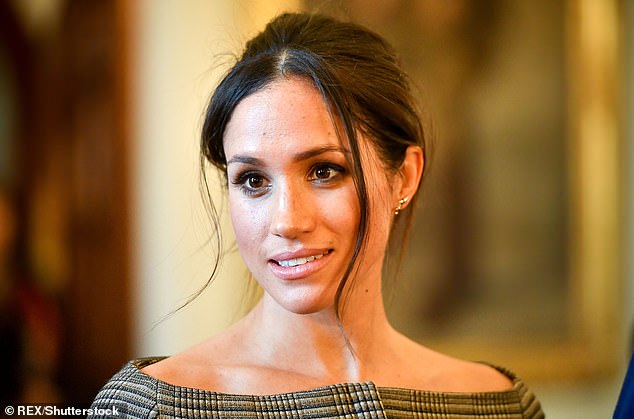 However, she sensibly wore black tights to keep the chill away and covered up in a festive dark berry coat, also from Club Monaco.

Both items worn by Meghan, who is expecting her first child with Prince Harry in the Spring, are from the brands main clothing line and are not maternity wear.

The Duchess is following in the footsteps of her sister-in-law Kate who managed to keep wearing non-maternity clothing from her favourite labels well in to her third pregnancy with Prince Louis.

The Duchess finished off the outfit with a pair of £770 black pointed ankle boots by her wedding dress designer, Givenchy.

She wore her brunette blocks swept back in a neat ponytail with a centre parting and kept her make-up glowing and natural. 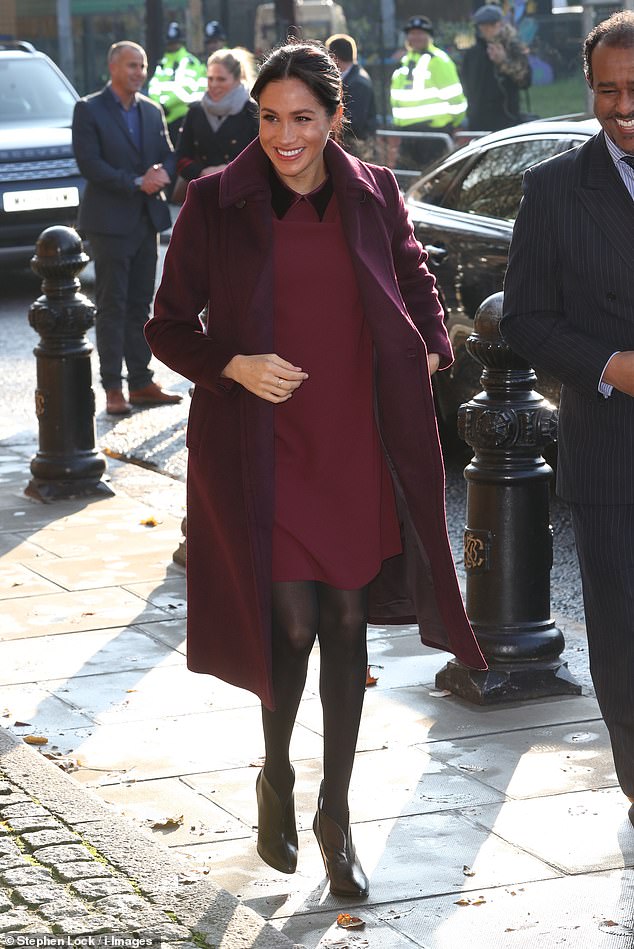 Meghan, 37, looked radiant this morning in a burgundy dress with a velvet collar from her favourite Candian brand Club Monaco, teamed with a coat in a similar shade from the same brand 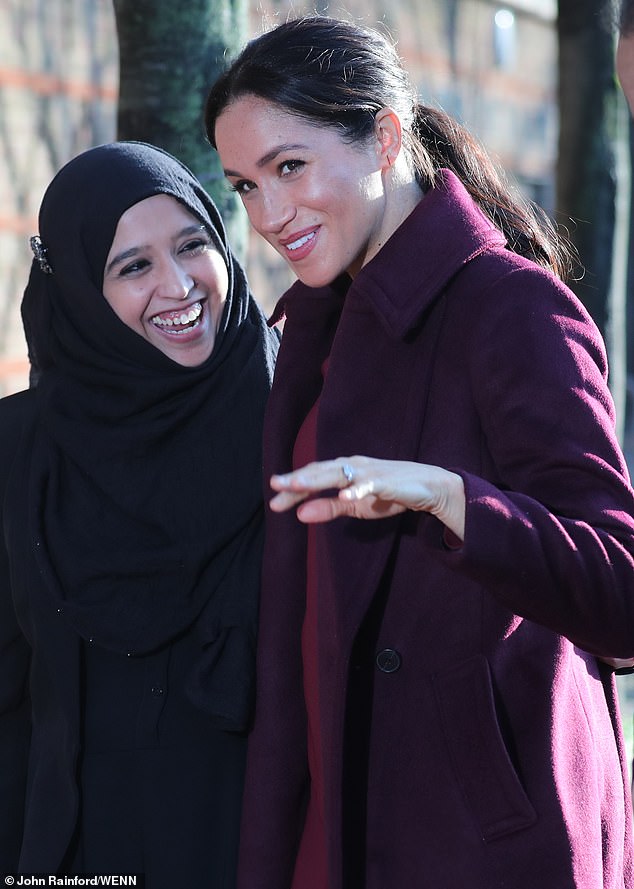 Meghan, pictured visiting with Zaheera Sufyaan at the Hubb Community Kitchen in West London, switched up her usual style by wearing a subtle berry lipstick to complement her outfit

Despite previously professing to dislike colourful lipstick, Meghan switched up her usual look and wore a subtle berry shade to complement her outfit.

Club Monaco is a firm favourite with Meghan who previously lived in Toronto when she was filming Suits.

It’s known for its smart staples and prices that are at the top end of the high street, without veering into designer territory. 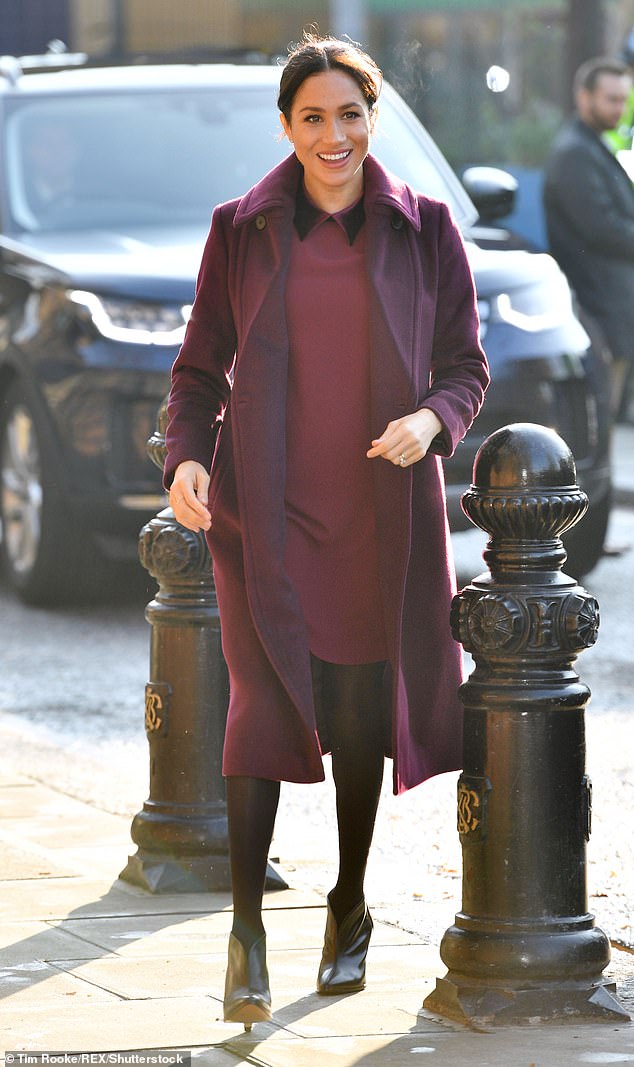 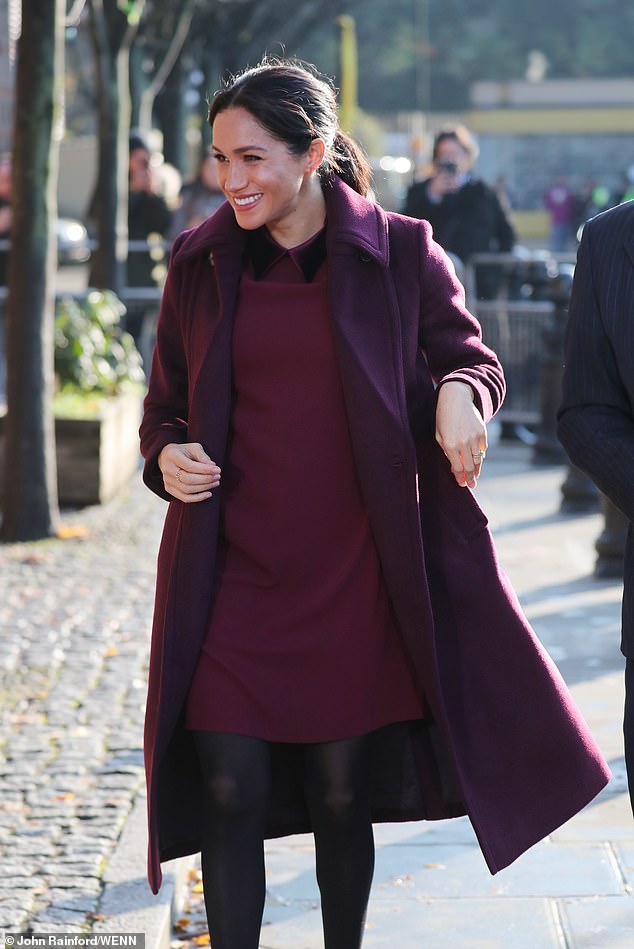 The Duchess, who usually prefers midi length skirts and dresses, changed up her look in an above-the-knee shift from Canadian brand Club Monaco

Despite embracing a new life in the UK, the royal is still fiercely loyal to brands from Canada and the US – with many recommended by her unofficial stylist Jessica Mulroney who lives in Toronto.

Earlier this year Meghan, 37, collaborated with the women from the Hubb Community Kitchen in West London on Together: Our Community Cookbook.

It featured more than 50 recipes from women whose community was affected by the Grenfell Tower fire in June last year, which left 72 people dead. 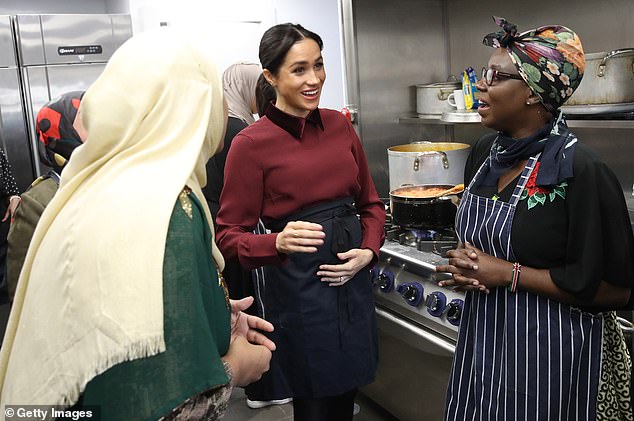 Today the pregnant duchess is seeing how the funds raised by the book – which shot to the top of the literary charts – are already making a difference.

They set out to raise £250,000 to renovate the kitchen and open it seven days a week and expect to easily surpass that, especially with Christmas coming up.

Supported by The Royal Foundation and published by Penguin Random House companies, Together has raised enough funds for the kitchen to be completely redesigned and re-fitted, with the women’s input, to capture what has been described as their ‘joyful spirit’.