Will these be on Harry and Meghan’s holiday menu? Duchess of Sussex’s recipes for a festive spiced cocktail and maple glazed potatoes resurface ahead of the couple’s first California Christmas with their son Archie

Meghan Markle’s favorite holiday cocktail recipe is once again making its rounds, giving a hint as to what she and Prince Harry might be sipping in front of the fire this December, as they prepare to spend their first Christmas in California with their son Archie.

Long before she was the Duchess of Sussex, the former Suits actress would often share recipes and entertaining advice on her website and lifestyle blog The Tig — named after Tignanello, one of her favorite wines.

In a recently resurfaced interview with Grazia from 2015, Meghan, now 39, divulged her recipe for a boozy almond milk spiced holiday cocktail while offering a series of tips for hosting the perfect Christmas with friends — which she is likely doing this year. 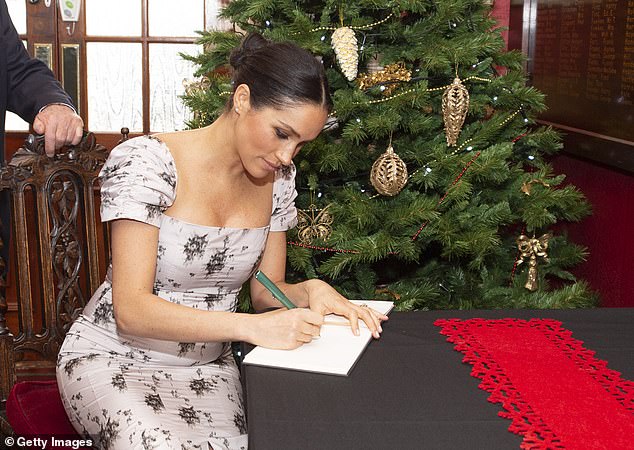 Host: Meghan Markle’s holiday recipes have resurfaced as she prepares to celebrate her first Christmas in California with her husband Prince Harry and their son Archie (pictured in 2018)

While the duchess is known to be a wiz in the kitchen, the beverage is actually easy to make, requiring only almond milk, cinnamon, cardamom, ginger, clove, dates, and bourbon, of course. 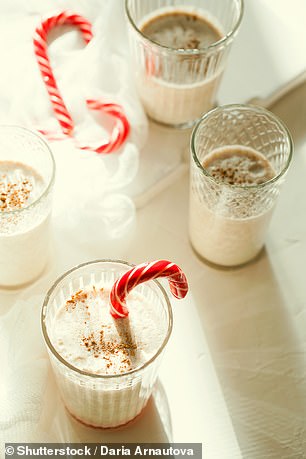 In 2015, the Duchess of Sussex shared her recipe for her festive  almond milk spiced holiday cocktail (stock image)

Meghan advised blending all the ingredients — except for the alcohol —  in a powerful blender and then pouring the mixture into a small saucepan.

‘Heat at a low temperature until heated and then add 4-6oz into the pot depending on your friends’ palates. Pour each drink and garnish with a cinnamon stick,’ she said.

‘If you prefer this drink cold, then omit the heating and shake it hard in a cocktail shaker and serve in champagne glasses with a cinnamon/sugar rim on the glass.’

Meghan also shared a recipe for one of her favorite holiday sides, which may be on the menu at her new $14.65 million mansion in Montecito, California, come Christmas.

‘Holidays with your friends allows you to break the family traditions and avoid Aunt Julie’s fruit cake!’ she said. ‘Have each of your friends bring a dish or cook together in the kitchen. If you do not have a proper set-up, use your dining room table or kitchen counter as a buffet.’

Meghan admitted that she tends to overdo when it comes to meal-planning, noting that her recipe for maple glazed potato wedges can be made with leftover sweet potatoes.

‘If you’re like me, you end up buying way too much of everything for holiday meals. So whether you have leftover sweet potatoes or simply want to revamp the classic holiday side, these maple glazed potato wedges are crave-worthy,’ she said. ‘With the slight kick from cayenne and the brightness of the added lemon, they will be a crowd favorite.’

All you have to do is slice the potatoes into wedges and coat them with a mixture of oil, lemon juice, and maple. After they’re tossed, sprinkle them with cayenne and salt to your liking.

‘Lay onto a parchment-lined baking sheet and bake for a half-hour at 425 Fahrenheit  for 30 minutes,’ she added. ‘At the 15-minute mark, toss the potatoes and add the handful of pepitas for crunch and texture. They will be beautiful, browned and crisp and ready to devour.’

As part of the interview, Meghan offered advice for presenting an elegant ‘table-scape.’ She recommended ‘keeping it simple and crisp’ by using an all-white tablecloth, runner, and napkins. 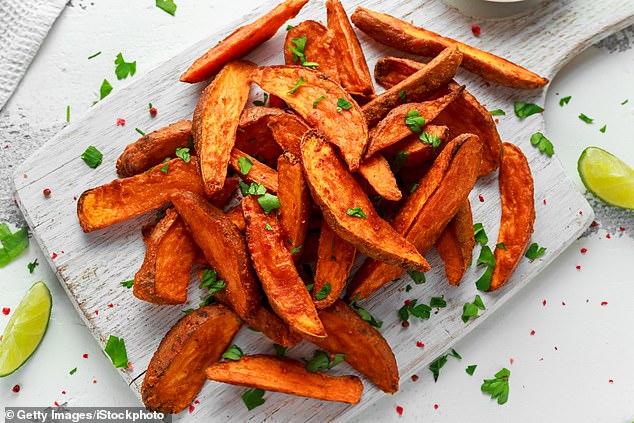 Yummy side: The Duchess of Sussex said her ‘maple glazed potato wedges are crave-worthy’ and get a ‘slight kick from cayenne and the brightness of the added lemon’ (stock image)

She suggested accenting your dining table with gilded plates and napkin rings and using a ‘stylish set of cutlery.’

‘All white flowers placed in the low vases are the perfect centerpiece,’ she added, proposing that ‘mint julep cups’ or Moscow mule mugs could function as low vases.

Her fondness of white blooms was evident on her wedding day to Prince Harry in May 2018; the duchess opted for sweet peas, lily of the valley, astilbe, jasmine, and astrantia, as well as Princess Diana’s favorite forget-me-nots.

Throughout her old Toronto home, the color white played a predominant role in Meghan’s decor. She shared snaps on her now-shuttered Instagram page showing off a white couch in her living room, white dining chairs, white walls, and white bedding. 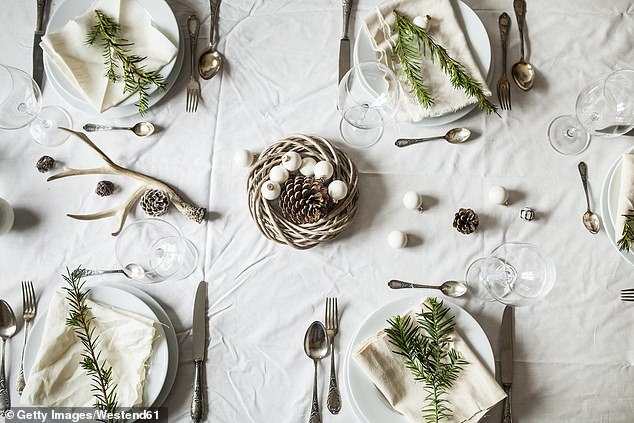 Decor: Meghan suggested accenting your holiday dining table with gilded plates and napkin rings and using a ‘stylish set of cutlery’ to set off the white table cloth (stock image) 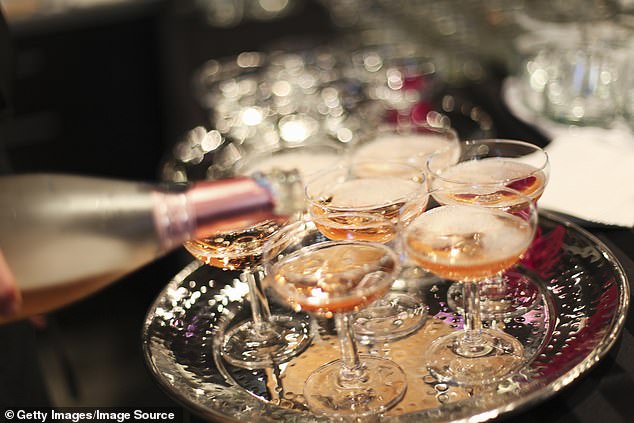 And her design inspiration didn’t stop at the table; the former actress shared tips for giving your hallway or living room a festive makeover.

She suggested taking the traditional concept of garlands or magnolia branches wrapped around stair banisters or draped over mantelpieces and giving it a ‘twist’ by using them to trim ‘the outline of a mirror or beautiful piece of artwork.’

Meghan and Prince Harry, 36, were said to be out shopping for holiday decor last week when the duke was reportedly mistaken for a Christmas tree salesman by an excited little boy.

The funny mixup is said to have occurred when they were out looking for a tree for their mansion in Montecito, where they will be spending their first Christmas since they stepped down as senior royals.

It is understood that Harry and Meghan were at Big Wave Dave’s Christmas Trees & Pumpkin Patch, a shop that was set up in tents in a Macy’s department store parking lot in Santa Barbara. 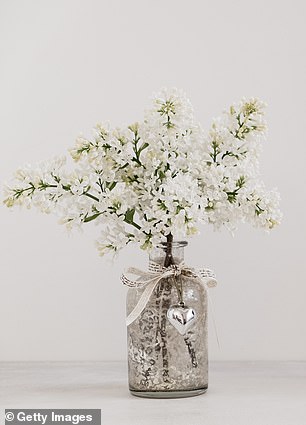 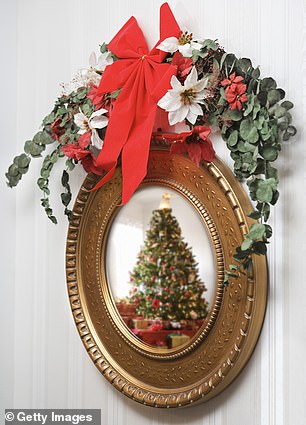 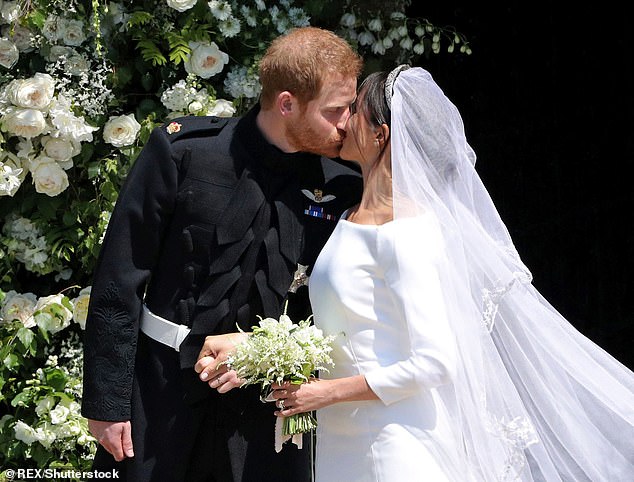 Personal style: Meghan’s fondness of white blooms was evident on her wedding day to Prince Harry in May 2018 (pictured)

According to salesman James Almaguer, who said he works at the tree lot, the couple would have gone unnoticed, but a child walked up to Harry, looking for some assistance.

It has been reported that Harry and Meghan won’t be spending Christmas in Sandringham and are ‘looking forward’ to celebrating their first holiday with their 19-month-old son Archie in their new home.

Vanity Fair’s Katie Nicholl said the Sussexes are excited for their first American Christmas living in California and will travel to the UK days later, allowing them to isolate for two weeks ahead of the start of Meghan’s High Court case against the Mail on Sunday, which begins on January 11.

It will mark the second year the couple will have spent the holiday away from the Queen, 94, and other royals — having reportedly spent the last festive season with Meghan’s mother Doria Ragland and their son in Canada.

The royal expert went on to report that the news would likely be ‘disappointing’ for the monarch who is ‘missing’ Harry and her great-grandson Archie, whom she has not seen for a year.

Sources said Prince Harry had no plans to cross the Atlantic any time soon because of the COVID-19 crisis. 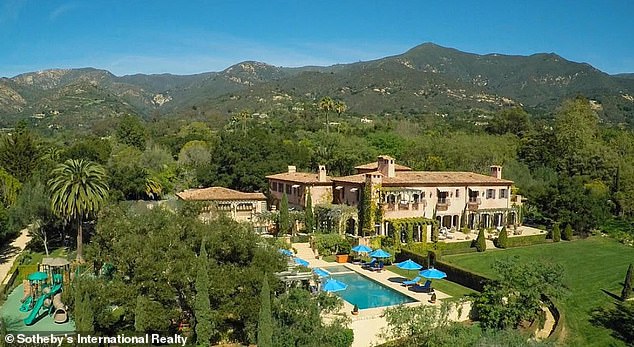 New pad: The Duke and Duchess of Sussex are reportedly celebrating Christmas in their new $14.65 million mansion in Montecito, California, that they bought over the summer 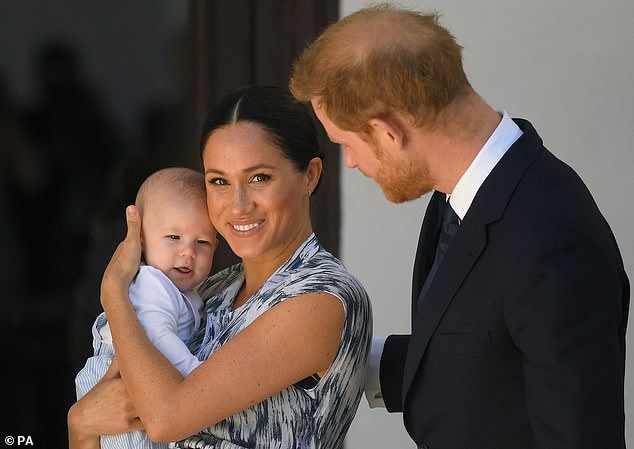 California Christmas: This year marks their 19-month-old son Archie’s second Christmas and their first since they stepped down as senior royals 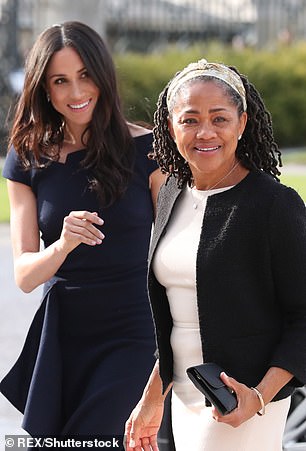 Guest list? The family is reportedly going to be joined by Meghan’s mother Doria Ragland (left) as well as their friends David Foster and his wife Katharine McPhee (right)

The insider explained: ‘Global travel has been made very complicated by the coronavirus pandemic and at the moment the duke has no plans to travel back to the UK, certainly not before Christmas.’

Instead, the couple will travel to the UK with their son Archie in the period between Christmas and the New Year.

Prince Harry and Meghan spent last Christmas in Canada, a first for the couple, who, up until that point, had celebrated the holiday at the Queen’s Sandringham estate every year since their 2017 engagement.

Harry had always spent Christmas at the Queen’s Norfolk home, barring 2012 when he was serving in Afghanistan.

The news came after another source claimed Prince Harry and Meghan planned on spending Christmas in the US with musician David Foster. 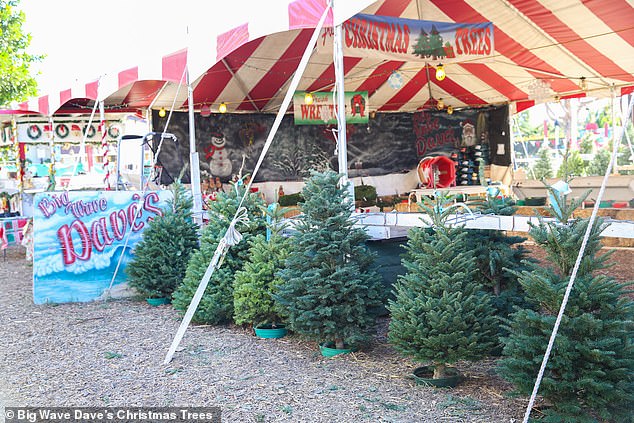 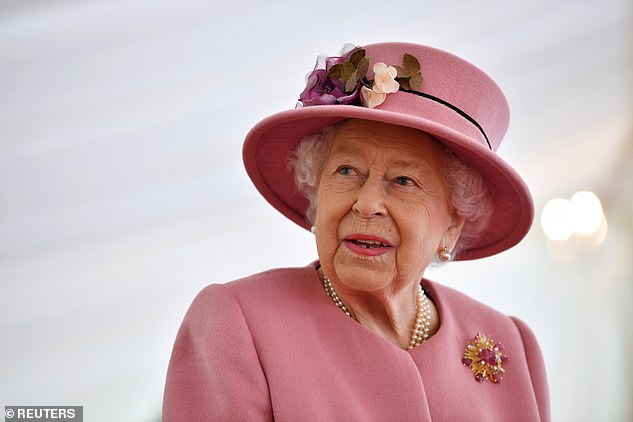 Sad: A royal expert reported that the news would likely be ‘disappointing’ for the Queen, 94, who is ‘missing’ Harry and her great-grandson Archie, whom she has not seen for a year 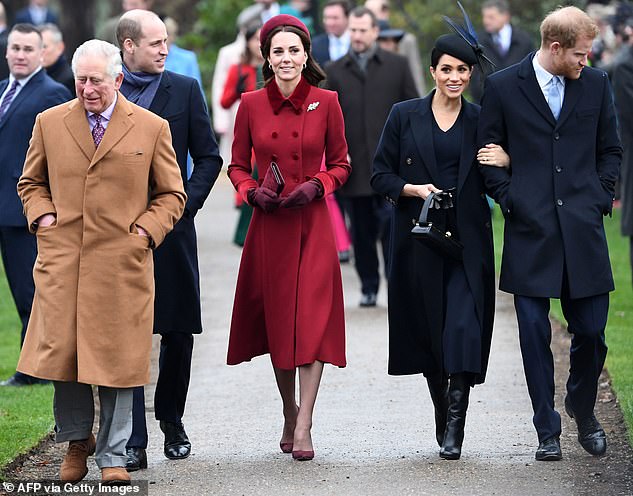 New tradition: The royal couple previously spent every Christmas since their 2017 engagement at the Queen’s Sandringham estate (pictured) up until last year when the stayed in Canada

The Mirror reported the duke and duchess plan to host Harry’s ‘surrogate’ dad, Canadian record producer David, and his wife Katharine McPhee for their own Christmas soirée in Los Angeles.

‘Meghan very much wants to host the first Christmas at their new home with her mom,’ a source close to the couple claimed. ‘She’s really excited and is planning on doing all the traditions she grew up with as a child, including the cooking.’

Katherine, 36, knows the duchess from their high school days in Los Angeles, having attended the same high school.

According to the source, David and Katherine offered to host the festivities at their home; however, Meghan volunteered to have the celebration at theirs.

It comes after another source claimed to Vanity Fair’s Katie that the royals are enjoying their new life in California and their new home, and have no plans of returning to the UK for Christmas.

They also suggested that Harry and Meghan might be trying to avoid tensions after the reported fall out of the ‘Fab Four.’

‘Let’s just say that while things are better between Harry and his brother, it’s not what it was, and I don’t think anyone is ready for a cozy family Christmas right now,’ the source added.