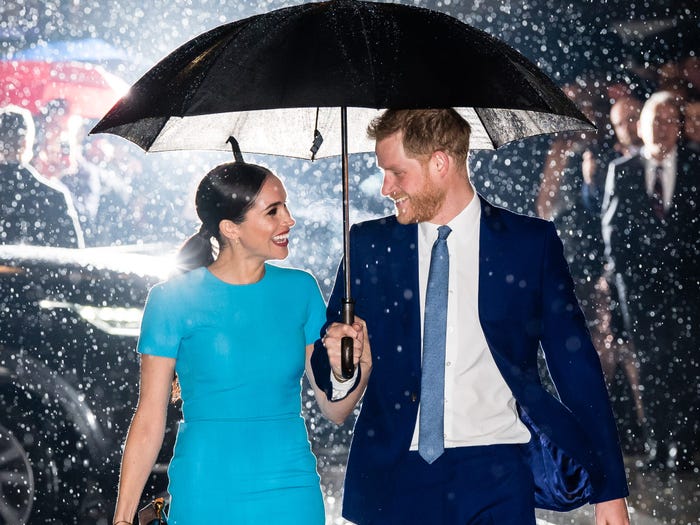 Meghan Markle and Prince Harry scrapped their duke and duchess titles in the trailer for the first episode of their new podcast, Archewell Audio.

Markle and Harry, who are known officially as the Duke and Duchess of Sussex, introduced themselves by their first names in the teaser clip for Archewell Audio. The first episode of the series, a holiday episode, will air on Spotify later this month.

"And I'm Meghan," the duchess said, before adding: "One of the things my husband and I have always talked about is our passion for meeting people and hearing their stories. And no matter what the story, they usually offer an understanding of where someone else is coming from."

Harry added that the project is about bringing "forward different perspectives and voices that perhaps you haven't heard before" in order to find "common ground" and provoke change.

The podcast trailer had a more informal tone than the couple's recent engagements, with the duchess even poking fun at her husband's "podcast voice" in the clip.

The couple stopped using their HRH titles when they stepped back from royal duties in April this year, but they continued to use their duke and duchess titles for official projects and engagements.

The Sussexes usually style their names as Meghan, Duchess of Sussex, and Prince Harry, Duke of Sussex, but noticeably left out the titles on this occasion.

It isn't the first time they have opted to just use their first names. At the prince's first engagement since the step back was announced — the Travalyst summit in Edinburgh — he asked to be called "just Harry," dropping both his prince and duke title.

The Duke and Duchess of Cambridge also dropped Harry's official title in their birthday message to him in September. Writing a tribute to the duke, the official Twitter account for Kate Middleton and Prince William wished "a very happy birthday to Prince Harry today" instead of the Duke of Sussex.