If you’re like me and spend an inordinate amount of time going back and forth between ordering a six-piece chicken McNuggets or a Quarter Pounder at the Golden Arches, listen up. You don’t have to choose anymore, because McDonald’s’ 2 For $5 Mix & Match Deal is back and better than ever, y’all. For the first time, Mickey D’s Quarter Pounder with cheese is part of the lineup, so get ready to double fist two of your tasty favorites.

In case you hadn’t heard, it’s the most magical time of the year, and McDonald’s is keeping the holiday spirit going long after you’ve taken down your Christmas tree and festive decorations. On Thursday, Dec. 20, the fast food retailer revealed that as of Friday, McDonald’s 2 For $5 Mix & Match Deal is coming to town. Mickey D’s will be phasing out the $6 Classic Meal Deal for the new promo, which a rep confirmed will be available for a "limited time" at participating locations onward from Dec. 21.

In case you need a refresher, here’s how the deal works. Instead of having to choose one item from among your favorites, customers have the option to mix and match two different offerings from among McDonald’s classic dishes. Previously, this has included Mickey D’s Big Mac, 10-piece Chicken McNuggets, and the Filet-O-Fish, but now a new treat is making its way into the lineup. The Quarter Pounder with cheese, which now features 100 percent fresh ground beef, is also making its debut so you’ll have plenty of options to choose from. 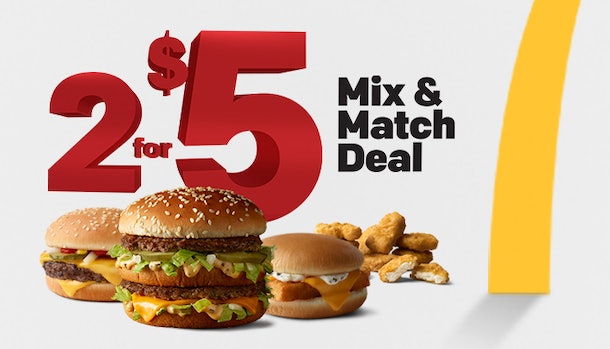 TBH, I’m so excited by the new promo, which is a lifesaver for anyone who hates making decisions about what they’re going to eat. Why choose between an order of nuggs or a burger smothered with ooey gooey cheese when you can have both for just a fiver?

Unfortunately, there’s no telling how long the 2 for $5 Mix & Match Deal is going to be around. Per the press release, it’s going to be offered for a "limited time," which means that you should definitely be taking full advantage of the promo the next time you’re at your closest Mickey D’s.

The future of the current Mix & Match Deal may be up in the air, but McDonald’s also revealed that its $1 $2 $3 Dollar Menu will be getting a major revamp in 2019, according to the press release. While they didn’t share which new items will be a part of the deal, the chain announced that they will be "enhancing" the current menu as part of an ongoing commitment to offer value to their customers.

"Our customers have told us value is important to them, so value continues to be key in sustaining our long-term growth," McDonald’s chief marketing officer Morgan Flatley said in the press release. "With the $1 $2 $3 Dollar Menu and our new 2 for $5 Mix & Match Deal, we’re providing our customers a strong everyday value platform through more local market flexibility, plus rotating deals."

From the sound of things, it looks like Mickey D faithfuls can expect to score great savings on their favorite menu items in the new year, and that’s something everyone can get on board with.