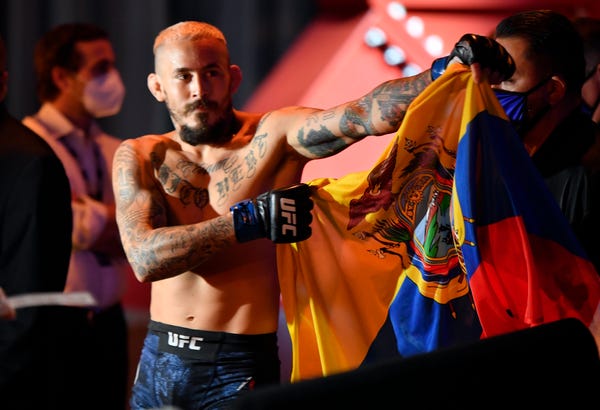 Marlon Vera is moving on to a big, bantamweight match after kicking the UFC prospect Sean O'Malley so hard "he quit."

Vera posted his first official win of the year when he defeated O'Malley in the first round of a UFC 252 fight in Las Vegas on August 15.

Many MMA publications, including Insider, reported that a "freak injury" caused O'Malley to lose.

However, it later transpired that, rather than O'Malley rolling his ankle early in the fight, Vera had leg kicked the up-and-comer so hard beforehand that he started struggling to stand properly — let alone compete.

"It's simple," Vera said, explaining the finish to Insider. "You throw a kick so hard, someone's going to get hurt.

"I'm a good kicker. I love the calf kick. I love the low kick. I threw it so hard I know I'm going to do damage. It's the same thing if you punch somebody in the liver. Same when you punch someone in the jaw, and they fall down.

"There's a lot of ignorant people who didn't even understand what happened," Vera said. "If I'm me, 10 years ago, I'd think the guy just rolled his ankle.

O'Malley is a 'little bitch,' according to Vera

O'Malley was on his back before the opening round had even finished and took horrific elbow strikes to the head.

The referee Herb Dean waved the bout off, and after Vera had his hand raised as the winner, O'Malley left the arena on a stretcher.

The result put a dampener on O'Malley's rise through the UFC rankings.

At a virtual media day earlier in the week, O'Malley told reporters he was visualizing a similar career trajectory to superstar fighter Conor McGregor. A UFC promo even compared the 25-year-old to other sports stars like NBA players Luka Doncic and Russel Westbrook.

O'Malley recently acknowledged Vera's win to MMA Fighting, but added: "Am I undefeated? Yes. Mentally, I'm undefeated. I felt superior in there until my foot gave out."

When asked for his reaction to how O'Malley has been handling the loss, Vera scoffed. "He's a mental midget," Vera told us. "Little bitch. Good for him, now he's gotta keep telling himself that. We all know.

"I could become a clown right now, like, 'What did I tell you?' But you know yourself, you cannot lie. People's careers fall apart when they're all talk. You've got to be able to do both — talk and fight.

"[But if all you are is talk], and then somebody comes and f—- you up, then what? You're like, 'Oh s—, now what. Might as well keep talking.' It only works when you win.

Laughing, he added: "And that was a pretty sweet elbow that drilled his head."

Vera is already back at work, plotting his next move

The victory was one of Vera's most high-profile bouts, and he told Insider that there were celebrations — drinking, talking, having fun — but they only lasted one night.

He then let his body heal and his mind rest, before returning to the gym and began plotting his next move.

We spoke to him on Monday. "It's a normal day at the office," he told us. "That was just one night at the office, and now we're back like nothing happened. It's life. It's like any other job. You work [a shift] then turn up again like it's any other day."

He's been in the fight game for eight years and fighting specifically for the UFC since 2014. Regardless, he's still looking to improve.

"I ask some questions: 'How can I get better? What's next? What do I have to do to improve?' There's a lot of things you can do when you come back.

"And I'm happy. I'm moving forward in life. It was a good fight. I got it done, and now we see what's next."

Vera is loathe to walk back the O'Malley fight.

There appears to be a grudge with "The Kung Fu Monkey" Song Yadong, whom he lost a disputed decision to at a "UFC Fight Night" event on May 16, and if he were to fight anyone again, the Ecuadorian would prefer it to be Yadong.

"If we're talking about rematches, I'd rather fight Song Yadong first because that mother f—– is still my win. I beat his ass, and they give [the win] to him. That's a fight that I'd … I'd rematch him, fight him tomorrow.

"That kid is a fat-ass, but I'd figure out a way to put the weight on and fight him because I'm a fighter."

Vera told us he plans on competing for a third time in 2020. "I've not yet signed a contract, but I know I'm fighting one more time this year, so it's not going to be a little bitchy kid.

"I'll see what happens, if [O'Malley] keeps winning, and if he is really that sore, we can fight, just no cameras," Vera said. "We can see what's up. I'm a f—— fighter, not a diva, and not a clown.

Away from Yadong and O'Malley, Vera just wants to carry on climbing the bantamweight rankings until he gets in a position he can challenge for the UFC championship.

"The UFC is going to give me word soon, and I'll be fighting someone who will put me closer to a title shot if I win."