Chocolate factory worker, 33, who ate FOUR McDonald’s meals for breakfast shed 11st after realising he was too big to bend down and tie his shoelaces

A chocolate factory worker who ate four McDonald’s meals for breakfast told how he lost 11 stone after he realised he ‘couldn’t bend down to tie his shoelaces’.

John Peate, 33, from Brill in Buckinghamshire, consumed up to 7,000 calories a day, enjoying food like pizza with soft drinks.

His weight hovered around 22st for years but spiked to over 25st in 2016 as he turned to comfort eating to cope with his grandmother’s ailing health.

The turning point came in November 2016 when John, who then had a 58in waist, a 62ins chest and a  ‘very severely obese’ BMI of 44.1, realised he was too big to tie his shoelaces at his grandfather’s funeral.

John Peate, from Brill in Buckinghamshire, has revealed how he lost 11 stone (left before and right after his weight loss) after he realised he ‘couldn’t bend down to tie his shoelaces’ 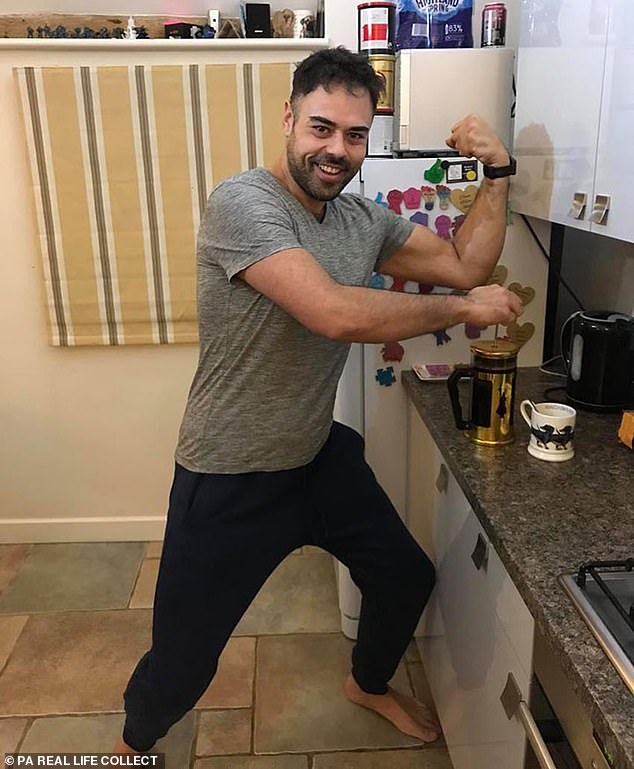 John (pictured after his weight loss) had usually hovered at around 22st, but ballooned to 25.5st at the end of 2016 when he was upset by his grandma Peggy’s declining healt

He recalled: ‘It was at the wake, when I couldn’t bend down to tie my shoelaces.

Following six months of yo-yo dieting, John started the 1:1 Diet by Cambridge Weight Plan in July 2017 and soon saw the weight fall off.

Now a trim 14st 7lbs, John’s transformation uncovered another health issue – he had been wrongly attributing an agonising pain in his right shoulder to his weight.

‘When I came off my motorbike in 2006, after losing my balance, I was left with pain, particularly in my shoulder’, he said. ‘But, because I had pain around my other joints, my knees and ankles, I put it down to the weight.’ 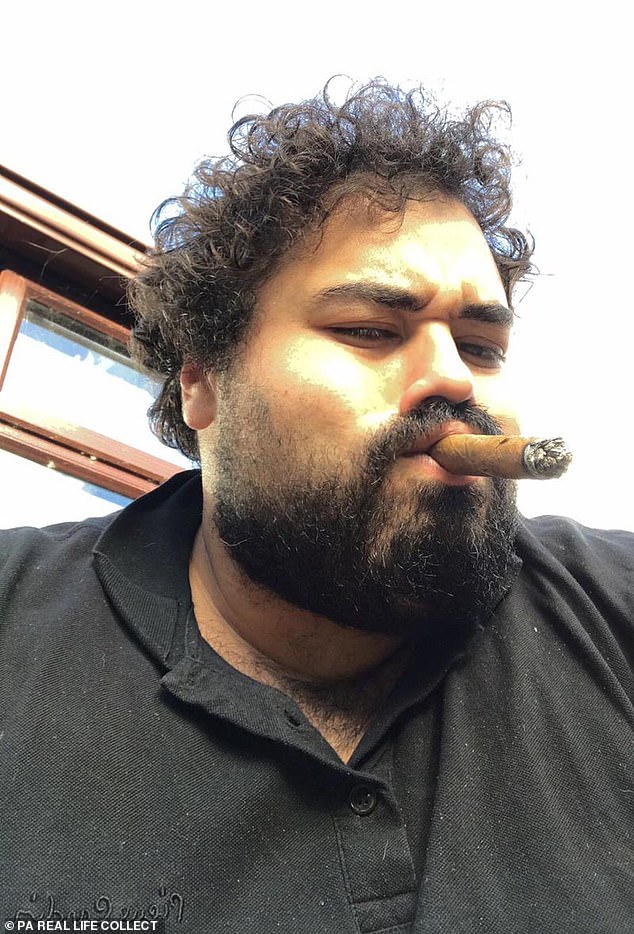 John said his turning point came when his granddad suffered a stroke on his 30th birthday and died two weeks later, aged 84, in November 2016 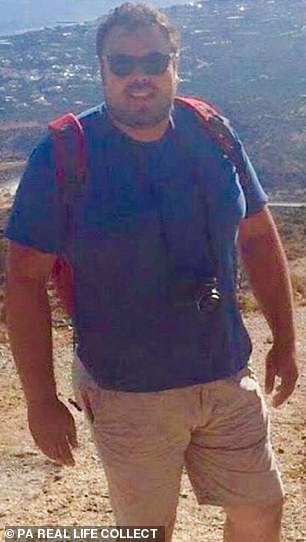 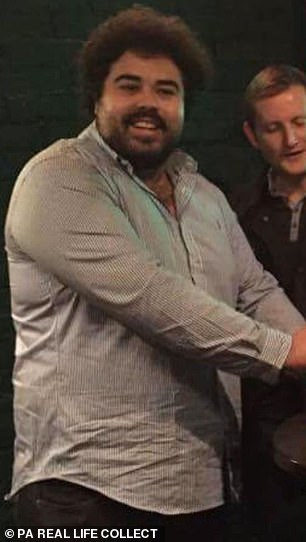 Pictured: John before his weight loss

‘The weight masked the pain in my shoulder, which was like a burning or stabbing pain, which I later found out was due to the accident.

‘I’d been reliant on morphine to manage it, but it left me zonked and unable to sleep for more than two hours at a time.’

He assumed his weight had aggravated the problem, but when he was still in agony after shedding eight stone in eight months, John sought help and discovered the pain was because of his crash 12 years earlier.

He said: ‘I’m able to sleep through the night and I don’t have that chronic pain. I’m on zero painkillers. It’s incredible.’ 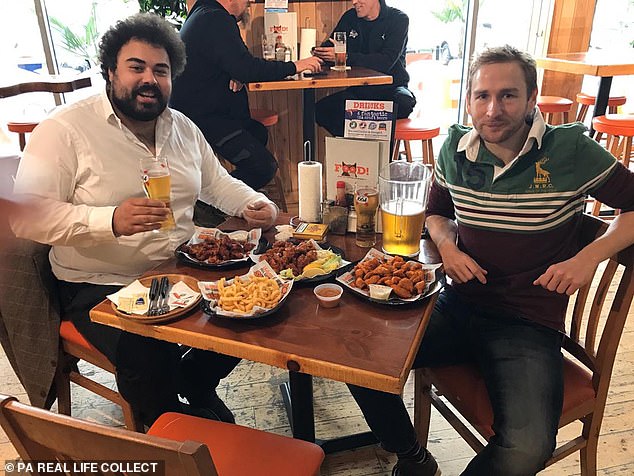 Now a trim 14st 7lbs, John’s transformation uncovered another issue – he had been wrongly attributing an agonising pain in his right shoulder to his weight

John’s over-eating spiralled out of control as his grandmother Peggy, who died in March 2018 of dementia, showed signs of confusion as she aged.

He said: ‘We were very close and, I was extremely worried, so I took to comfort eating.

‘I would work the night shift at the chocolate factory, then stop off at McDonald’s on the way home, eat four breakfast meals in secret in the car, then go home and have a bacon sandwich with Lou.

‘I was suffering from a lot of anxiety and depression, and the medication I was taking for nerve pain made me even hungrier. 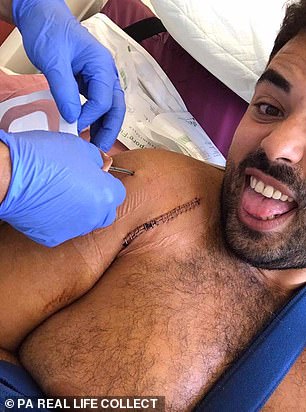 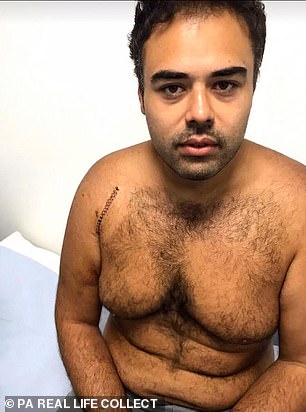 John discovered a pain in his shoulder was due to a motorcycle crash he had been in 12 years earlier rather than his weight, and underwent private surgery to correct the problem (pictured) 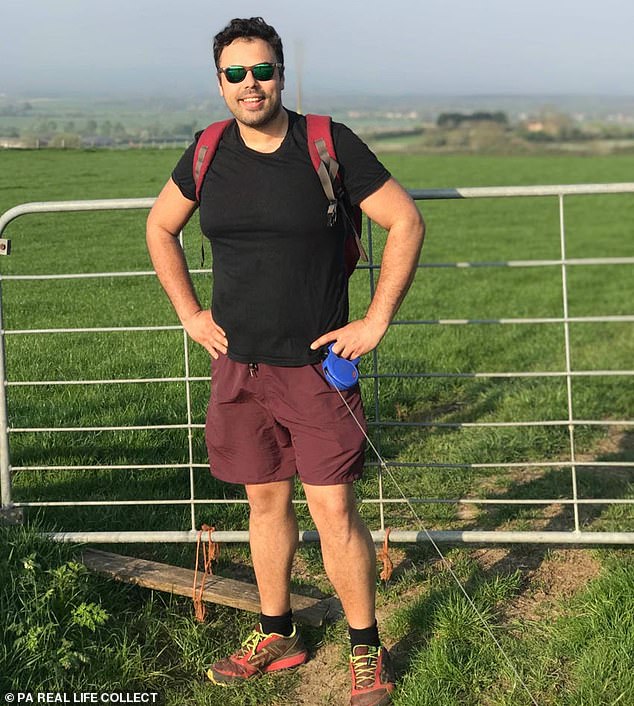 John’s over-eating spiralled out of control as his grandmother Peggy, who died in March 2018 of dementia, showed signs of confusion as she aged

‘I would look forward to the end of a bad day by thinking about what treat I could eat afterwards.

‘But, when I got home from work, I would sit in the car for 15 minutes because of the pain I was in – in my ankles, knees, my shoulder. I would have to build up to walking to the house.’

Luckily, all that changed when he began the Cambridge Weight Loss plan – having meal replacements for the first month, which meant ditching the fast food in favour of shakes and healthier meals.

And, within seven or eight months, John had shed an incredible eight stone – bringing his BMI down to below 29.

He said: ‘The first few weeks were not easy but once I got through that and was seeing the results and feeling better it was fine.

‘Once I started feeling healthier, I knew I’d get the same comfort feeling from walking up a hill as I would have had from eating a McDonald’s breakfast.’

John’s one surprise was that the pain in his right shoulder did not disappear as the weight fell away. 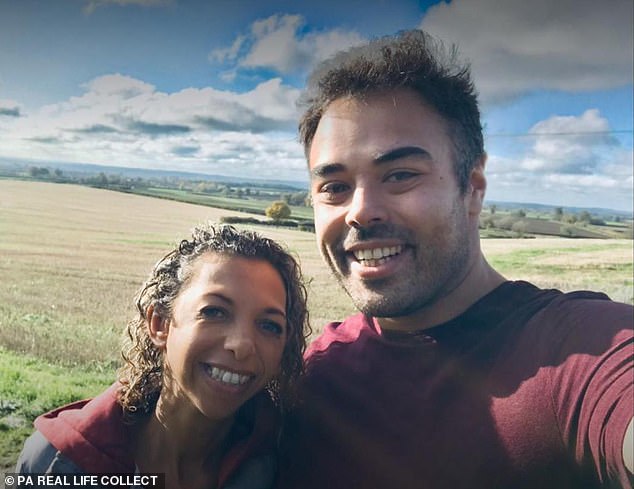 But within seven or eight months of being on the 1:1 Cambridge Weight Loss, John had shed an incredible eight stone – bringing his BMI down to below 29 (Pictured: John and wife Lou) 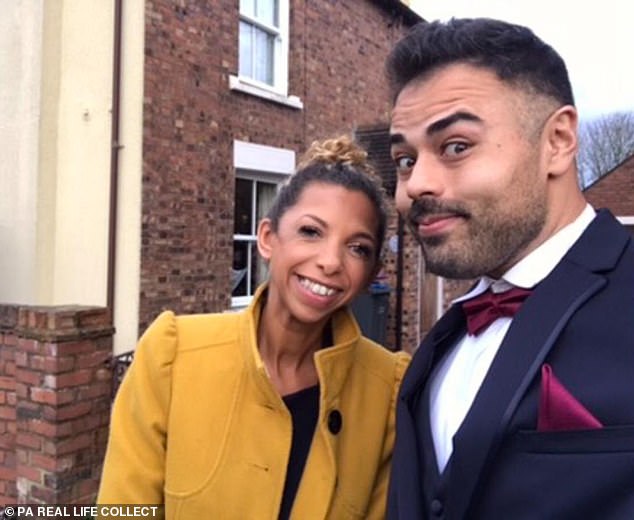 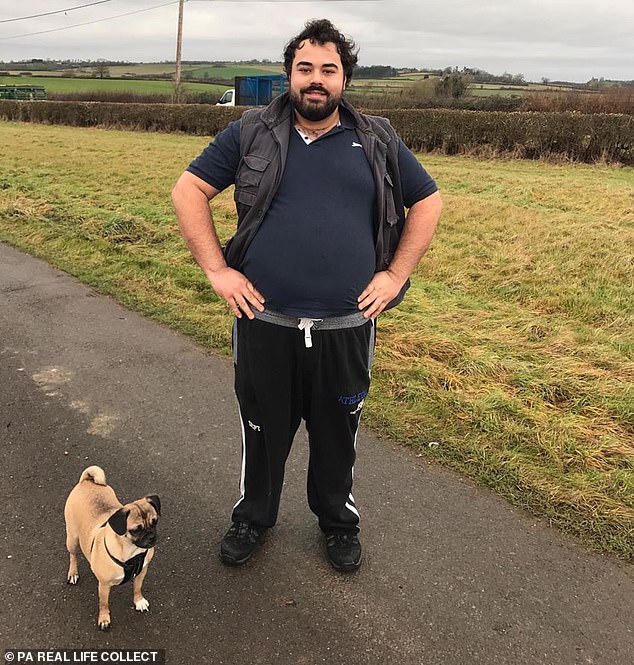 Lisa Jones, of Cambridge Weight Loss, said she was proud to watch John’s personality and confidence grow as he lost weight

He recalled: ‘I had dislocated my shoulder during my accident and ruptured my tendon. I had surgery a couple of years later, in 2008, and they put a pin in it because it was unstable.

‘But the bigger I got, the more pain there was, so I assumed my weight had made it worse.

‘When I lost eight stone and was still in agony, I went to see a doctor and found out the pin had been spinning around and the cartilage had also been rubbing away.

‘After I lost the weight I was able to see a private surgeon – I wanted it solved quickly, even though my weight loss made me eligible for NHS surgery – and had an operation, where they washed the joint and shaved my collarbone.’

Surgeons also discovered there was no cartilage in John’s shoulder, which helps prevent bones rubbing together – meaning the ball and socket joint at the top of his arm, which they found had also developed arthritis, was painful.

Going under the knife in July 2018 he had three procedures at the BMI Chiltern Hospital in Great Missenden, which included being fitted with a brand new metal shoulder.

What is the 1:1 Diet by Cambridge Weight Plan?

The 1:1 Diet by Cambridge Weight Plan offers a personal diet consultant to help dieters lose weight in the best way for them.

Those on the diet consume meal replacement food provided by the plan, including pasta, shakes, smoothies, and bites.

Lisa Jones, of Cambridge Weight Loss, said: ‘There are five different steps to the 1:1 Diet by Cambridge Weight Plan, using a mix of conventional foods and meal packs for nutrition to keep your calorie intake down.

‘And with the help of a personal diet consultant, you get one to one attention, and support, this makes such a difference to being able to reach your weight loss goals.’

Now, a year and a half later, he has built up strength in his arm, which was weakened as part of his bicep was removed, and is pain free and able to use the limb normally.

Happily married for 10 years, John, who has not ridden a motorbike since his accident, has lost a further three stone since his operation and is now a super-fit 14st 7lb.

He said: ‘It saved my life getting that weight off – I’ve lost nearly 11st. I eat a lot of meat and vegetables and control my carbs and don’t have fizzy drinks at all. I stick to around 2,300 calories a day and I’m not going to waste those on drink.

‘Obviously, working where I do, I get a lot of free chocolate, but I know now that if I overeat it will make me feel unhappy, so I don’t do it. I’ve had really supportive colleagues who have helped me along the way.

‘I still enjoy the things I used to enjoy, but I only have them as a treat.

‘I also use walking to manage my fitness and walk around 30 miles a week.

Praising his wife, John said he could never have achieved such drastic weight loss without her support.

He said: ‘She has been amazing. My wife has known me as a bigger man and it’s nice to provide her with a bit of arm candy now!’

Lisa Jones, of Cambridge Weight Loss, said she was proud to watch John’s personality and confidence grow as he lost weight.

She said: ‘John’s journey had added complications due to his surgeries. From the onset of each operation we had to side step his diet plan and just practice maintaining his present weight, until his body had made a full recovery.

‘This is a point where a lot of people would sit in front of the TV and eat the wrong food, but not John, he put into practice everything he had learned by following the steps in the 1:1 diet step book.

‘I’m immensely proud of what he’s achieved under his circumstances. John is proof that if you understand what foods to eat, in the right portion, that weight loss and maintenance can change your life.’