She said her ‘I dos’ in a lavish Miami ceremony in April, but it seems that one wedding wasn’t enough for Aldo Zilli’s daughter.

The celebrity chef’s daughter Laura Zilli and her husband of seven months Nick Gold held a star-studded party for their London-based marriage celebrations over the weekend.

The socialite and former reality TV personality and music mogal husband welcomed a host of celebrity guests including the likes of Lizzie Cundy and Boy George who took to the stage to perform one of his hits.

The celebarations are likely a welcome relief for the groom whose family is currently facing accusations of ‘conning’ the Swedish state out of more than 50million kronor – £4.25million – by selling ‘overpriced or mislabelled’ cleaning products to local councils.

Peter Gold, a wealthy British businessman now reportedly living in the U.S., set up no less than five companies selling everything from wet-wipes and bin-bags to printer ink and ‘ice-melting chemicals’, in Sweden in 2003.

Gold’s wife Janice and two sons, Daniel and Nick are all listed as former directors for several of them.

However, the scandal seemed far from Nick’s mind over the weekend as he celebrated his marriage to Laura.

Both the bride and groom wore white for the occasion with 32-year-old Laura stunning in a figure hugging floor length gown for her second wedding dress.

Meanwhile entrepreneur investor Nick opted for a casual open collared shirt and chinos for the occasion.

Laura shared a snap of she and her husband with her Instagram followers writing: ‘I am so proud to be your wife I love you with all my heart. Now let’s celebrate.’ 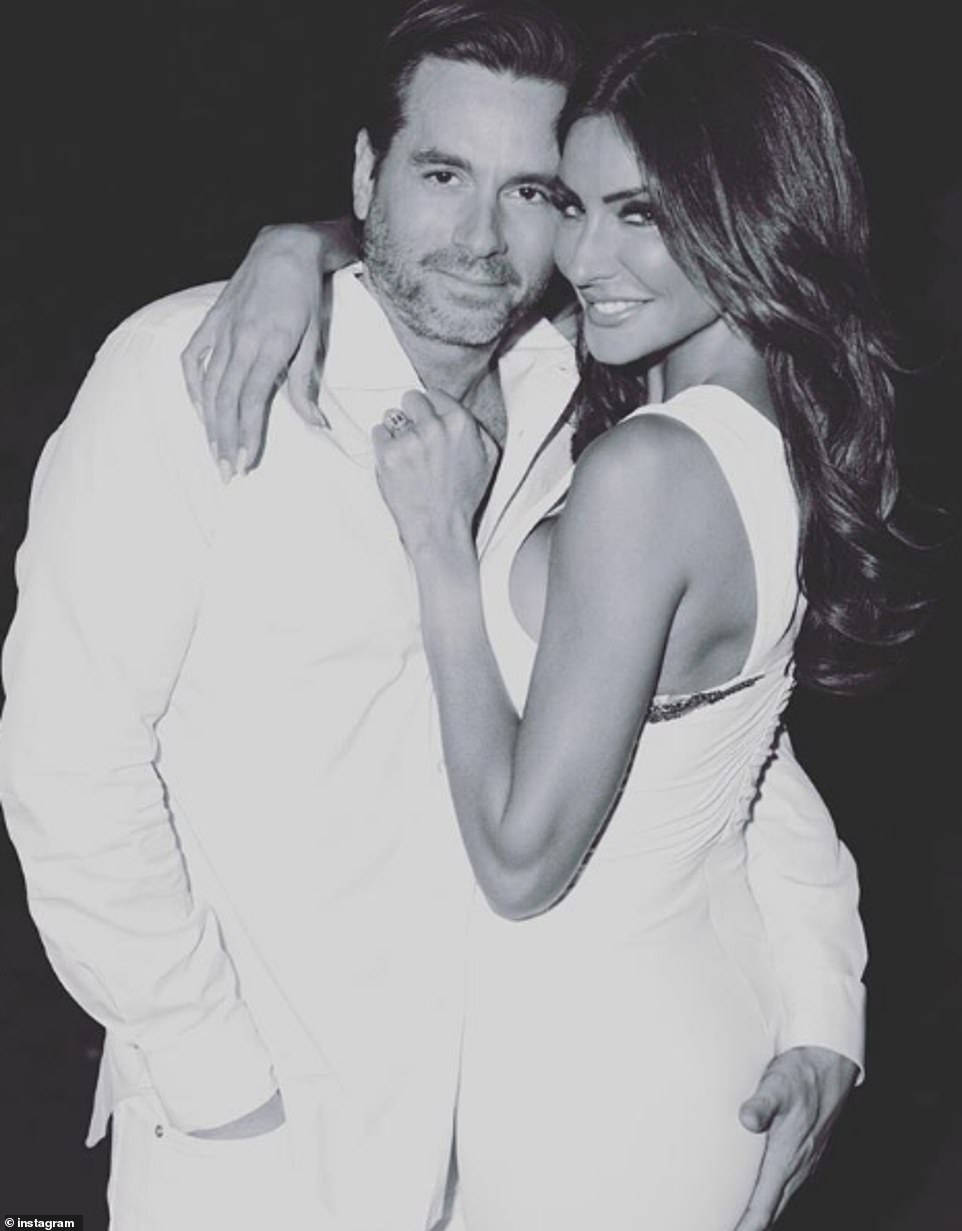 Aldo Zilli’s daughter Laura has held a second set of wedding celebrations in London following her marriage to Nick Gold in Miami in April. Pictured: The happy couple at their wedding party over the weekend

Commenting on a photo shared by his wife on Instagram Nick wrote: ‘I can never marry you enough times! Love you’

Commenting on the photo Nick wrote an equally gushing response: ‘I can never marry you enough times! Love you.’

As the celebrations dissolved into the evening Laura changed into a glamorous black body con dress by Julien McDonald to party into the night.

The evening do saw a second celebration for the Zilli family as they toasted Laura’ stepmother on her birthday.

Nikki Zilli, who is Aldo’s wife, joined her stepdaughter and Boy George up on stage to perform a dance routine with Laura sharing a video of their performance on Instagram captioning it: ‘Happy Birthday to my crazy wonderful stepmum @nikkizilli safe to say we are the most alike when it comes to getting up on stage! #backingdancers #magic @boygeorgeofficial the best night celebrating our family love you.’

Chef to the starts Aldo was also in attendance and could be seen joining singer Boy George for one of his musical numbers. 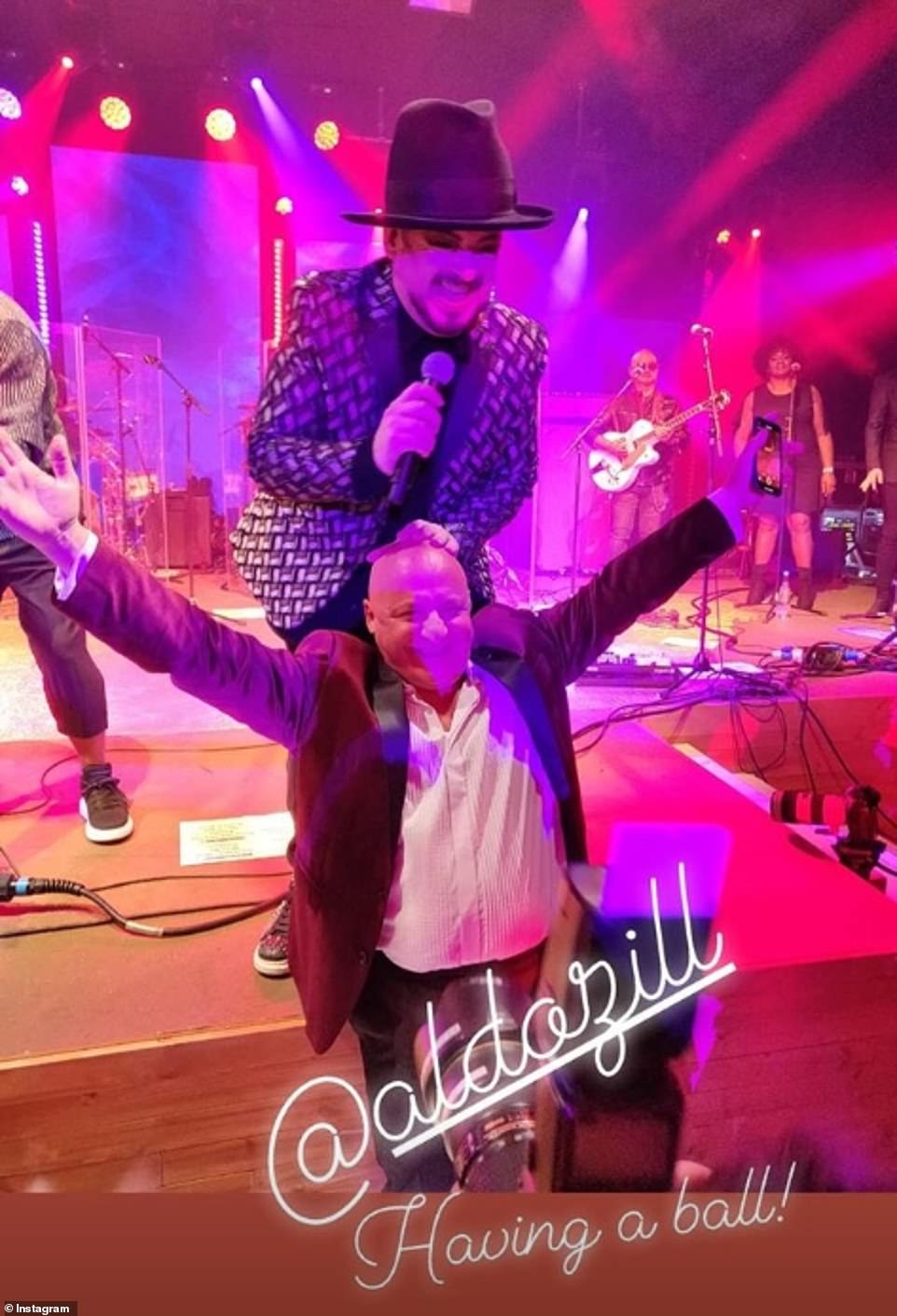 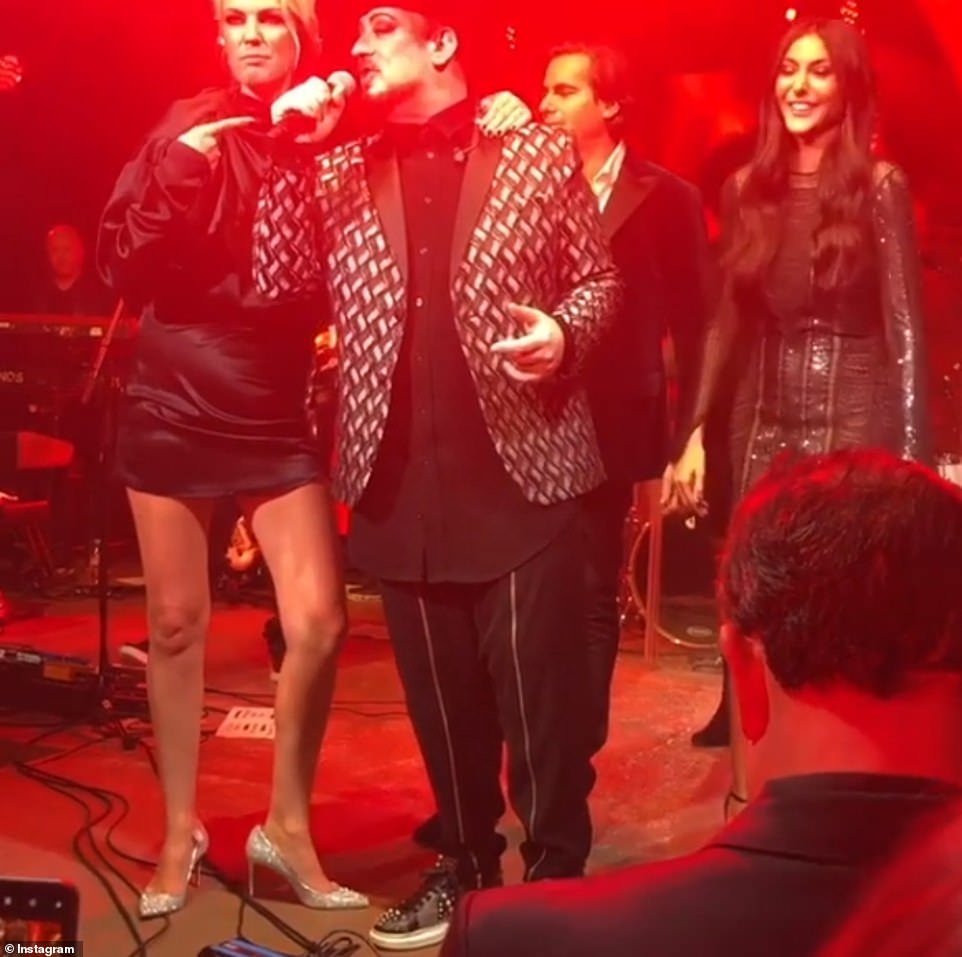 In October the Gold family was accused of ‘conning’ the Swedish state out of more than 50million kronor – £4.25million – by selling ‘overpriced or mislabelled’ cleaning products to local councils.

Peter Gold, a wealthy British businessman now reportedly living in the U.S., set up no less than five companies selling everything from wet-wipes and bin-bags to printer ink and ‘ice-melting chemicals’, in Sweden in 2003.

Gold’s wife Janice and two sons, Daniel and Nicholas – who is married to the model daughter of celebrity chef Aldo Zilli – are all listed as former directors for several of them. 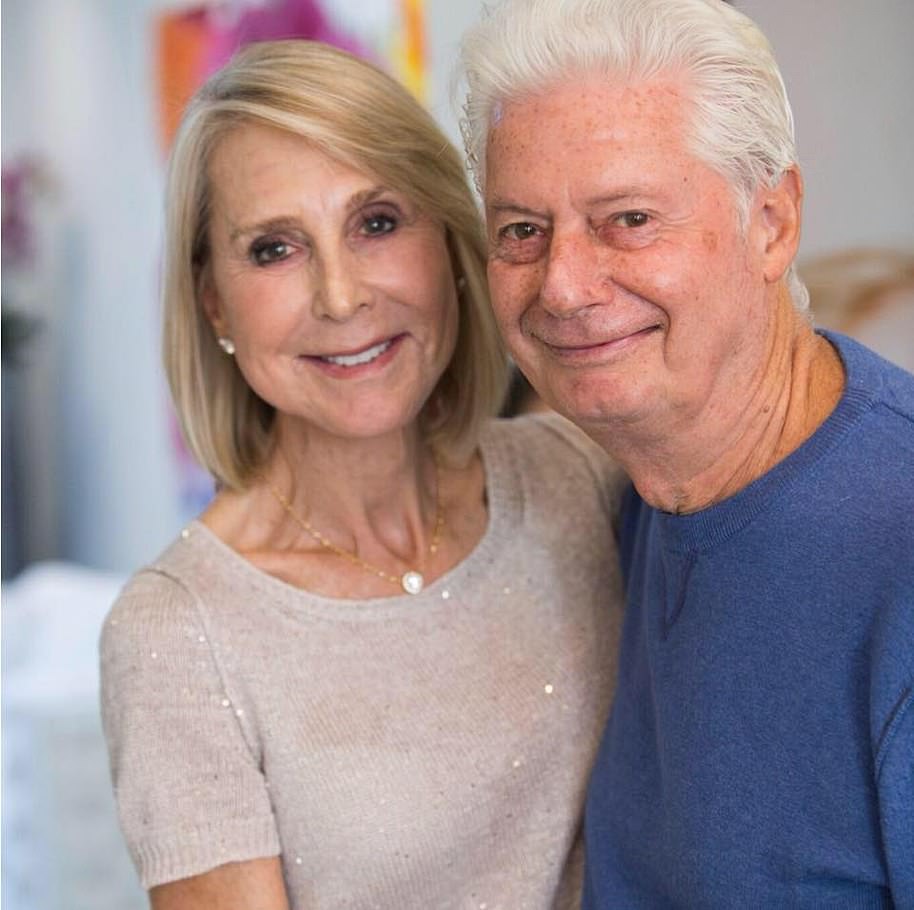 Allegations: An investigation by Swedish journalists claimed that companies owned by Peter Gold, pictured with wife Janice who was a company director, sold ‘ice-melting chemicals’ to councils which turned out to be 96 per cent road salt – at 165 times the price of road salt

Renowned investigative TV-show Uppdrag Granskning has now alkeged that until they went into liquidation last year, the Golds’ companies had been paid 55million kronor (£4.68m) in Swedish taxpayers’ monies – for goods the investigation claims were worth just five million (£430,000)

They allege that the companies were able to get local councils to sign orders for their goods by using ‘pushy and misleading telesales in combinations with bribes, gifts and threats’.

One council in Kil, Värmland, ended up with enough ‘ice-melting chemicals’ to last them 30 years, after a former council-worker signed up for deliveries from the company at a rate of 165 kronor (£14) per kilo.

In total, the council reportedly bought 6,440kgs (14,197lbs) of ‘ice-melting chemicals’ from Universal Solutions, a Stockholm-based company where all four members of the Gold family are listed as former directors.

Analysis by SVT found that the chemicals was in fact 96 per cent normal road salt, retailing for around one krona per kg – around 8.5p.

‘If this [the ‘ice-melting chemicals’] costs 165 kronor per kilo it is definitely a con,’ head of research at Swedish National Road and Transport Research Institute Björn Kalman told Uppdrag Granskning.

Having tested the ice melting capacity of the chemicals sold by the Golds’ companies against normal road salt, he added: ‘ I would say the effect is the same. If anything, normal salt is more effective.’

All five of the Golds’ companies – Royal Chemical Industries, Millennium Computer Systems, Genlite Search, Universal Solution and Interpoly Chemicals – were placed on a list of ‘untrustworthy corporations’ in Sweden, aimed at warning others from using their services, in 2011.

The companies, which according to Uppdrag Granskning had sold products to 216 councils and 140 state-run companies, were placed in liquidation in 2017.

The Swedish TV team were able to track down Nick Gold at his multi-million pound home in north London, where he denied being involved in his parents’ businesses.

‘I am not involved in the company, I don’t own any stocks, I am not a director, I have not profited from this,’ he told reporter Staffan Florén Sandberg.

However, Companies House has him registered as a former director in Millennium Computer Systems, Universal Solutions and Interpoly Chemicals.

Nick Gold is also listed as a former director of RCI Industries, and General Litesearch – two companies bearing near-identical names to the ones identified by the Swedish journalists.

He is also listed as a director of the company running scandalous nightclub and celebrity hotspot The Box in London’s Soho.

At the time of the allegations MailOnline contacted The Box as well as representatives for Laura Zilli Gold and Aldo Zilli for comment. Efforts were made to reach Nick Gold and his family.

And while Aldo is famed for his Italian cuisine it seems that his daughter had opted for American specialties when it came to feeding her guests.

Attendees could be seen helping themselves to food from London based eateries Dirty Burger and Chicken Shop which had set up a shack at the venue.

When it came to the decor the family appeared to have opted for a festive theme with the venue decorated with dozens of fir trees and Christmas lights.

Laura and Nick initially tied the knot in April this year in a glamorous Jewish ceremony on Miami beach, Florida, in front of high society friends including actress Samantha Rowley, who was recently linked to playboy James Stunt.

Laura, 32, looked exquisite in a strapless floral lace gown, with a sweeping train and a floor-length veil adding to the decadent look. 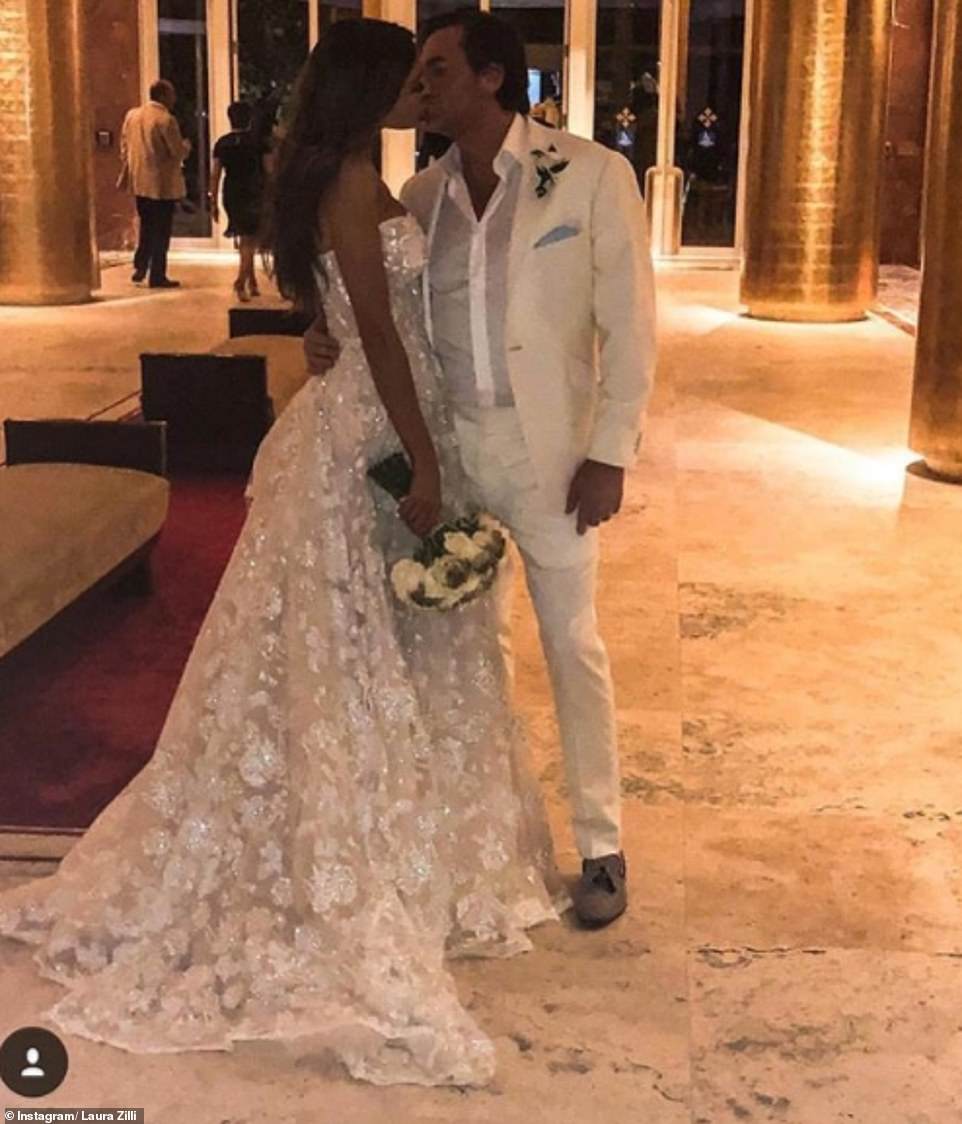 Laura and Nick initially tied the knot in April this year in a glamorous Jewish ceremony on Miami beach, Florida. Pictured: The couple at their wedding earlier this year 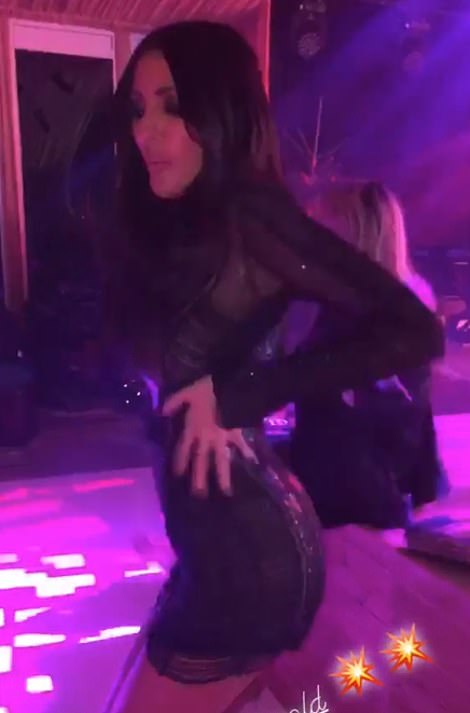 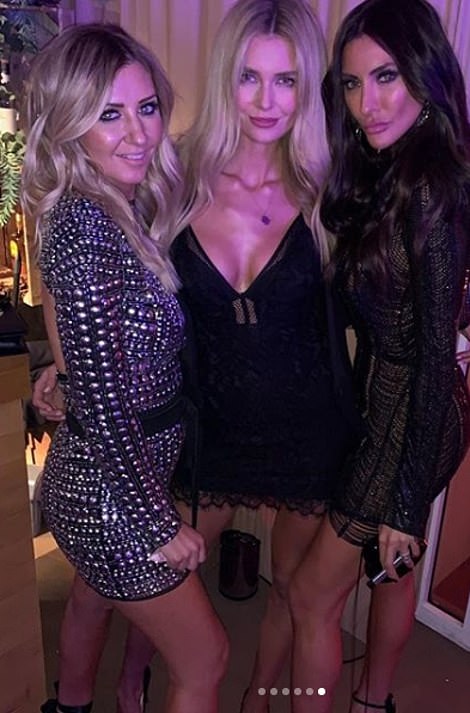 The white wedding featured an elegant ivory colour scheme, all the way through from the flowers to the bridal party, who wore smart white suits.

Laura’s traditional wedding gown was decorated with delicate lace flowers and intricate beading, which glittered as she walked down the aisle with her smiling father.

Laura is Aldo’s only-child from his first marriage to Jan Zilli. He also has a son Rocco, 12, and daughter Twiggy, 10, with second wife Nikki. 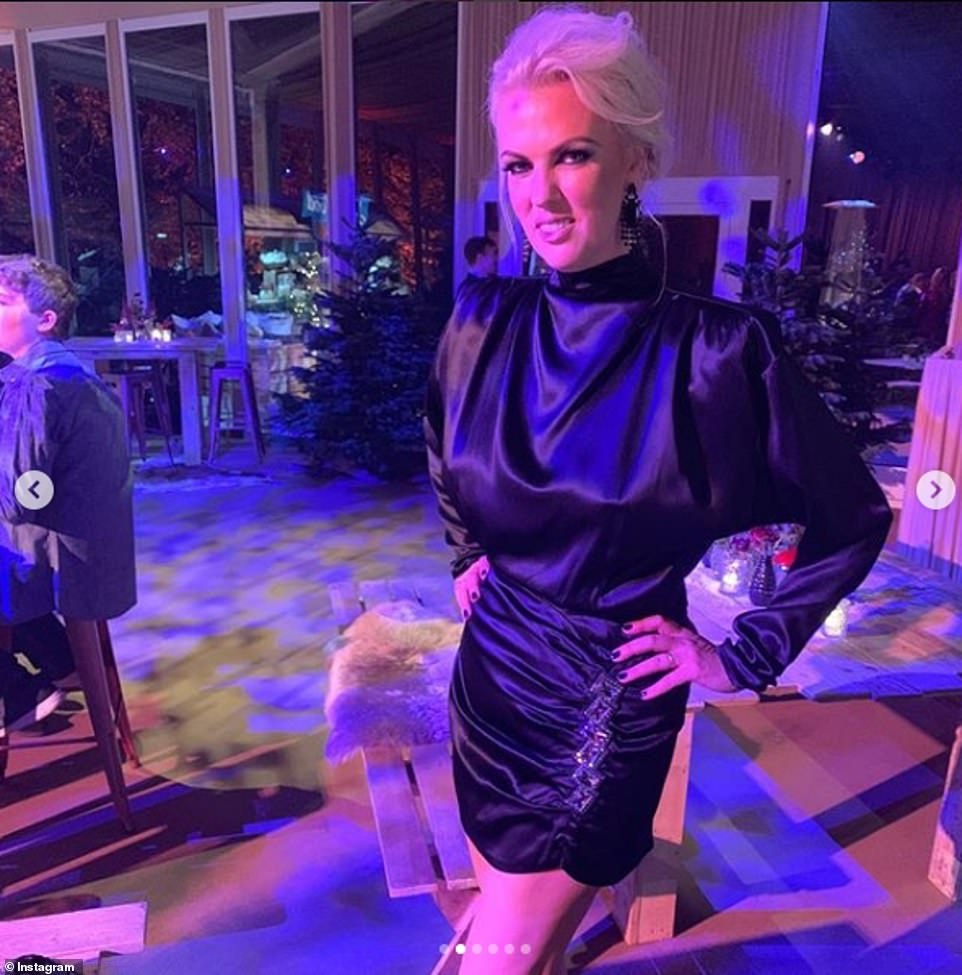 Nikki (pictured here) is Aldo’s second wife and the couple have two children together son Rocco, 12, and daughter Twiggy, 10 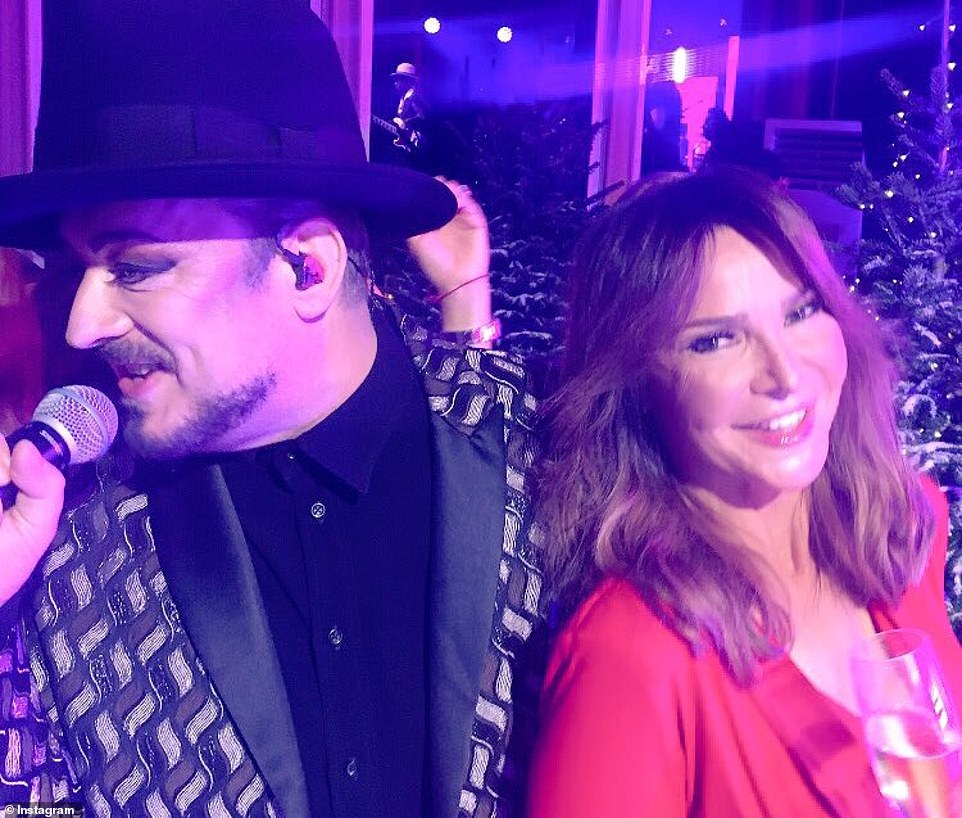 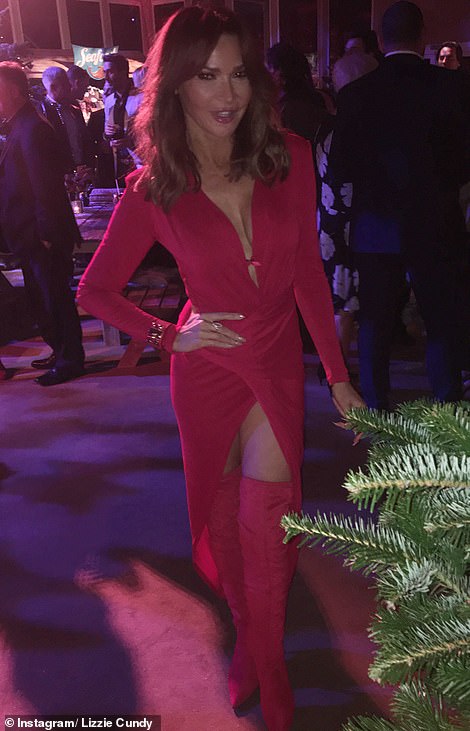 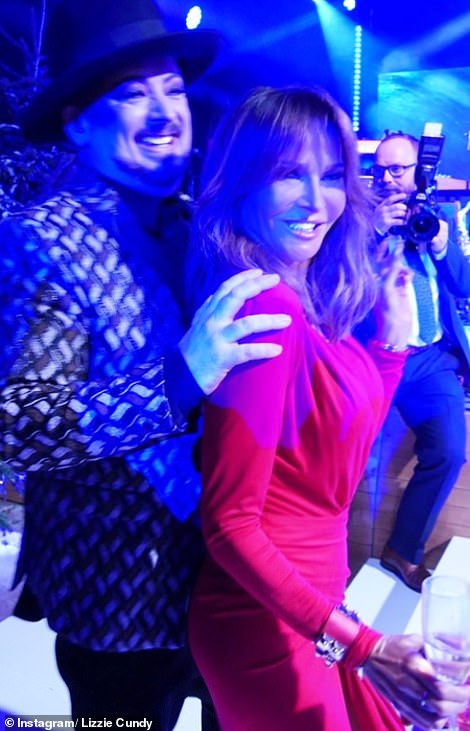 Congratulating Laura and Nick on social media Lizzie wrote: ‘Huge congrats @nickgold_1 @lauramgold1 on your wedding !! And happy birthday @nikkizilli !! It’s Winter wonderland here !! The boots are on and I’m ready to dance !!’

Her handsome new husband, who is believed to have proposed in May 2017, was dressed in a matching cream suit to celebrity chef Aldo, though the businessman added a slick touch by wearing patterned loafers with no socks.

Laura’s father Aldo has previously spoke of his pride for daughter Laura, telling The Telegraph in 2011 that he feared she would be a ‘nightmare’ until she settled down.

In the article – entitled ‘She’s the most beautiful thing in the world. But she’s a nightmare,’ Aldo admitted that he had not liked any of her previous girlfriends.

‘She’s going to become dangerous,’ he said. ‘When I left [home] she went a bit wild. She was coming to see me with a different guy every five minutes. It upset me. I didn’t feel in control any more. I don’t like boyfriends — not any of them. She is my blood, so I will be jealous.’ 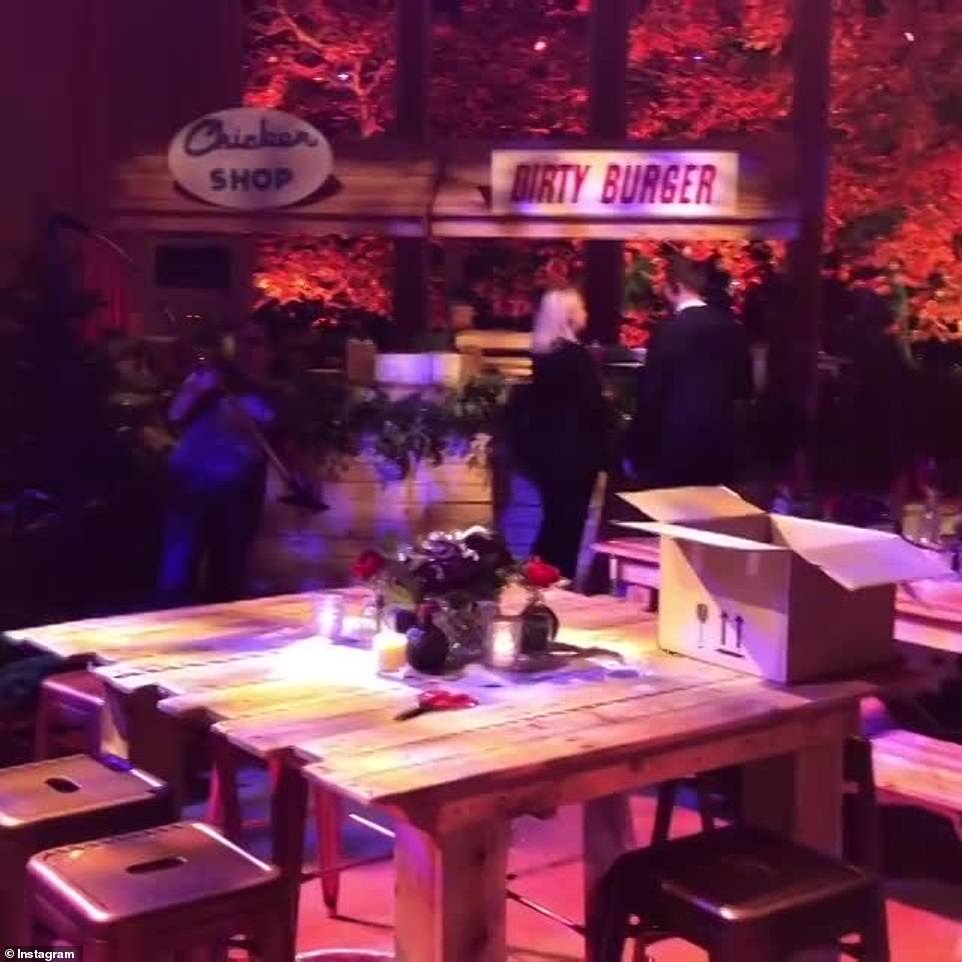 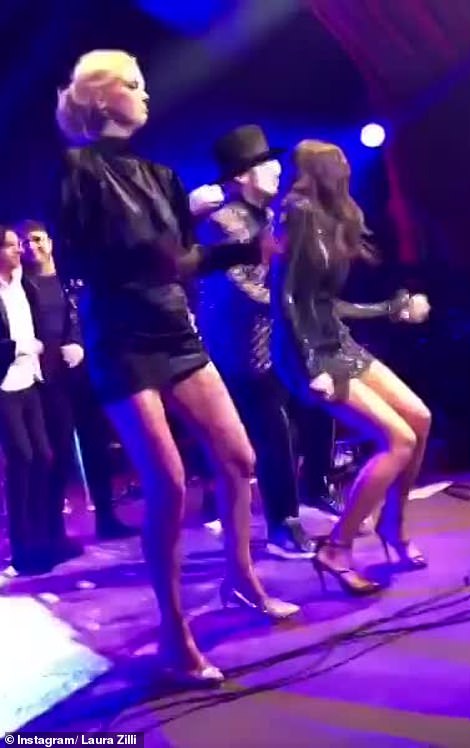 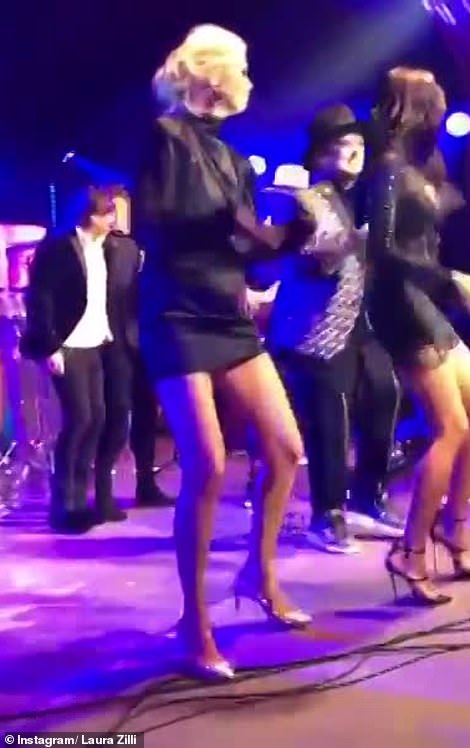 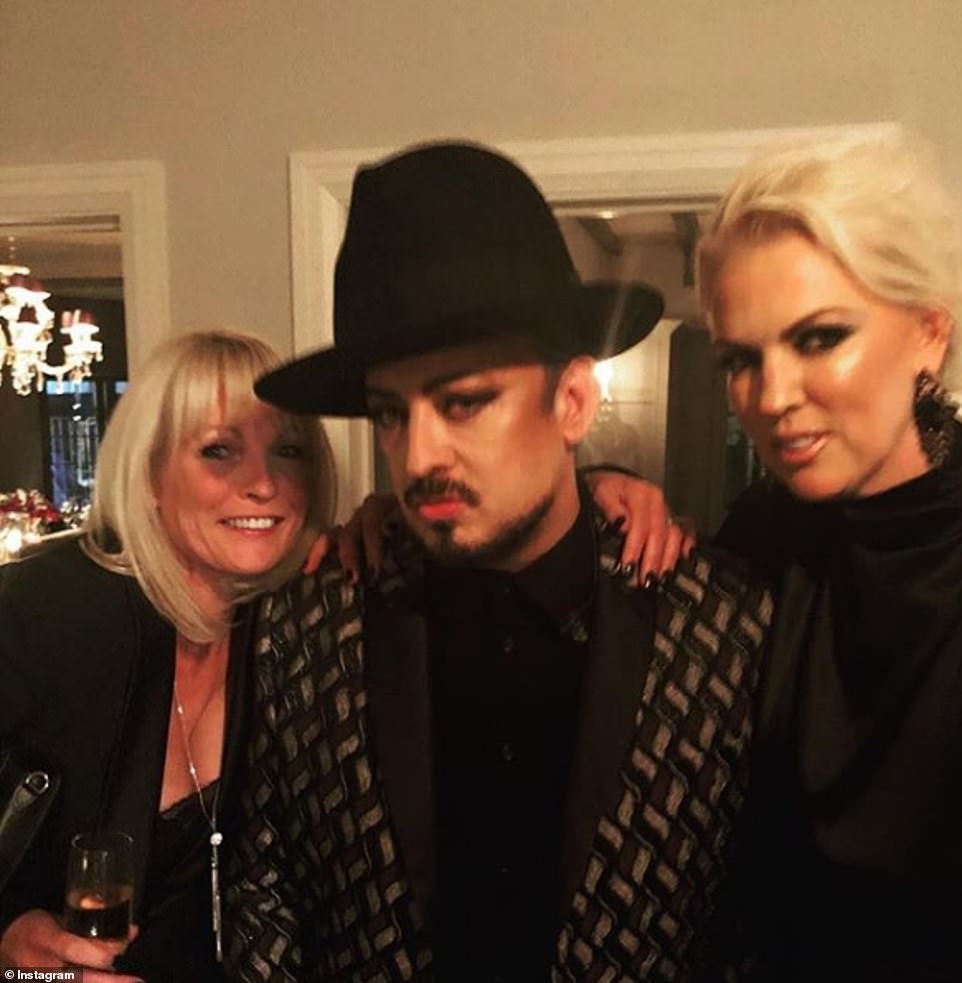 Boy George, who looked dapper in a jazzy blazer and one of his iconic hats, was more than happy to pose with guests

Laura started modelling at 15, was once the face of car manufacturer Alfa Romeo and was previously signed to the First Models agency.

She has asked her best friend, socialite Samantha Rowley, to be her chief bridesmaid. Though the blonde bombshell dressed in a colour scheme quite contrasting to the elegant nuptials.

Laura and her Maid Of Honor Samantha were roommates and rose to prominence together when they starred in reality show 7 Days, documenting the lives of Notting Hill residents in 2010.

At the time, Laura said her father was ‘apprehensive’ about her reality TV show appearance, yet he was excited to see her on the small screen.

In 2012, Laura briefly put her modelling career on hold to follow in her father’s footsteps and front a TV show and book called High Class Cooker. 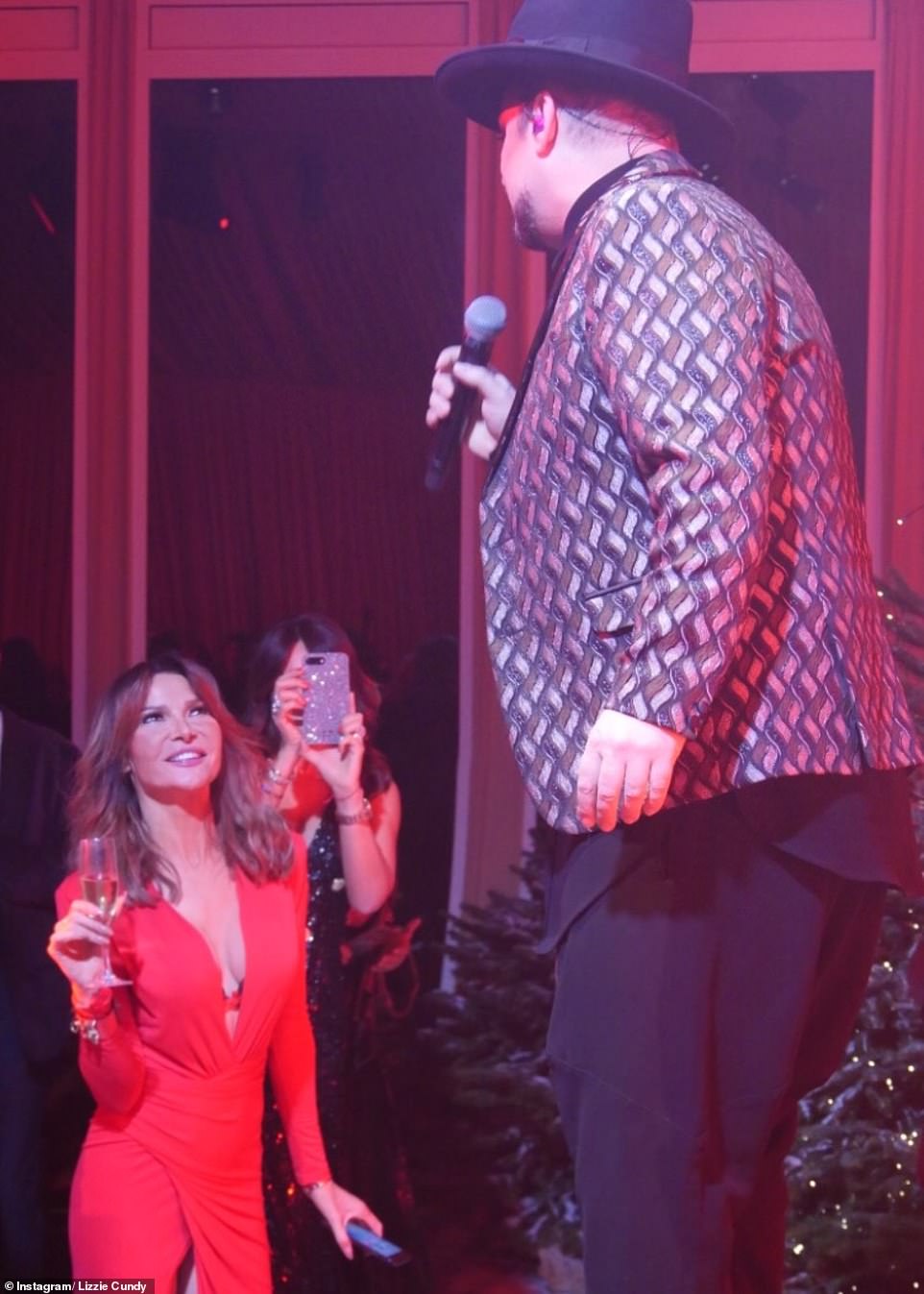 Lizzie Cundy shared a snap of Boy George serenading her on Instagram, captioning it: ‘The look of love!! When the amazing @boygeorgeofficial sings to you !’

The West-London based best friends have been dubbed the new ‘Petra and Tamara’ thanks to their recent association with James Stunt (Petra’s ex-husband) and their glamorous lifestyles.

Formula One heiresses The Ecclestones (similarly a blonde and a brunette) count private jets, lavish holidays and exclusive parties among their many plush pass-times, just like Samantha and Laura.

In preparation for the wedding, Laura and Samantha were pictured topping up their tans in teeny bikinis by the poolside.

In especially good shape for her wedding day, was ultra-toned Laura, who wore a navy blue bikini with a criss-cross design.

She rearranged the halterneck straps in an innovative fashion, making sure to avoid tan lines for her strapless dress, the next day.

Guests seemed to have gathered at the same hotel and were keen to enjoy some relaxation time, ahead of the nuptials on Saturday.