With so many entertainment options, it's easy to miss brilliant streaming shows, movies and documentaries. Here are the ones to hit play on, or skip.

There's something deeply disconcerting about Kevin Costner's bloody and sometimes corny modern-day Western series. And it's not that his character, billionaire Montana rancher John Dutton, is such a thoroughly odious creature. Sure, Dutton is a corrupt, murderous bully whose ego-driven grandiosity gets innocent people killed, and he engages in actual white slavery on his ranch to the point where some of his slaves end up literally branded with a red-hot cattle brand. That's not necessarily a mark against him – after all, millions of us love monsters like Al Swearengen (Deadwood) and Tony Soprano. 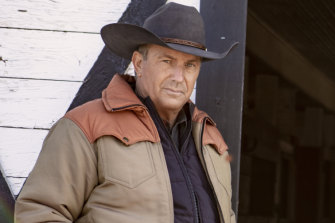 What causes the unease is the deep suspicion that Dutton is seen unironically as a hero by much of Yellowstone's target audience across the American Midwest and South. That Yellowstone is in effect Trumpism in entertainment form. If you can define a man by his enemies, Dutton's are certainly defining. One is the sophisticated coastal elite as incarnated by Danny Huston's rapacious property developer – the wrong kind of rich Republican. Another is brown people, as incarnated by Gil Birmingham's Thomas Rainwater, a scheming Native American leader who poses a dastardly existential threat to noble white ranchers by offering to buy their properties at market rates.

To portray a white billionaire like Dutton as the victim in such a scenario takes some mental gymnastics. To portray the Native American characters as the aggressors in a cattle-related armed standoff is breathtaking given that in real life such confrontations are synonymous with belligerent white ranchers. Then there's the whole authoritarian angle. Yellowstone's Montana is a place in which drug use is a grave moral failure that must be corrected by grotesque violence and slavery inflicted on behalf of a supposedly benevolent strongman in Dutton.

It really is a repellent little world that series creators Taylor Sheridan (Sicario) and John Linson (The Runaways) attempt to pull us into. Not to mention one in which it's a trivial matter to use explosives to change the course of a river, or indeed to neatly expose a pristine dinosaur skeleton at the bottom of a crater where a tree stump used to be. 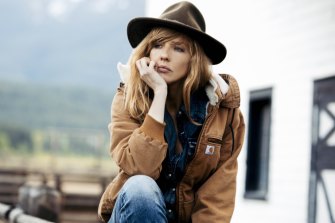 Only redeeming feature: Kelly Reilly as Beth in Yellowstone.

If there's one thing that saves Yellowstone from being a complete turkey, it's the Succession-in-cowboy-boots angle, specifically the terrific performance of Kelly Reilly (Britannia, True Detective) as Dutton's daughter Beth, a razor-tongued businesswoman emotionally deformed by the fact that Dutton's late wife was even more of a monster than he is. 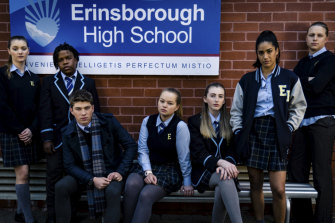 It's all happening at Erinsborough High, where the kids seem to be running the whole show – except, perhaps, for Olivia Lane (Grace O'Sullivan), who has suddenly gone missing in the middle of exams week. Elsewhere, trans girl Mackenzie (Georgie Stone) tries to sort out her relationship with Ritchie (promising newcomer Lachlan Millar), while Hendrix (Ben Turland) tries to get his whole physics class to tank their exam to get the teacher sacked. The five-episode series should prove agreeably diverting for Neighbours fans.

This dark comedy series about reclusive American poet Emily Dickinson is a slight sort of thing. It's made slighter still by the conceit of having Dickinson (Hailee Steinfeld) talk like a modern-day millennial while living in 1850s Massachussetts. "Nailed it!" she declares upon finishing a poem, while the soundtrack bumps along to the likes of Billie Eilish and ASAP Rocky. Jane Krakowski performs womanfully and everything looks expensive – right down to the unexpected CGI – but it's not a patch on Another Period (Stan*). 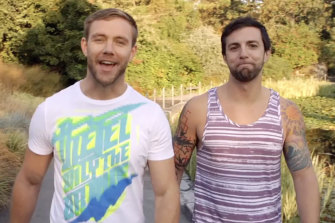 It's great fun watching Canadian frenemies Adam Rollins and Tommy D competing against each other in stereotypical "gay" jobs while comedian Robyn Daye Edwards stirs them relentlessly. Season four begins with lumberjacking – to the dismay of the slightly built Adam. "It's all strength," he complains. "You can't sass your way through a f–king tree!" The ensuing trials prove quite a trial, and there are plenty of laughs along the way. Other half-hour episodes involve attempts at being flight attendants, lifeguards and interior designers.

Some kings are born great; some have greatness thrust upon them. Take Henry V (Timothee Chalamet). At the start of this powerful new film from Australian director David Michôd (Animal Kingdom, The Rover) young Hal, as he's known, doesn't even expect to become king. He's more focused on a life of low-rent debauchery with his old pal Falstaff (Joel Edgerton). His estranged father, Henry IV (Ben Mendelsohn), is set to pass the crown to Hal's little brother, Thomas (Game of Thrones' Dean-Charles Chapman).

Of course, things don't work out that way and the rest is, well, history. Chalamet, for his part, looks every inch born to greatness. From the moment his Hal trades his long hair for a kingly bowl cut, he's a leader you'd happily follow into the teeth of the French cavalry. Almost everything about The King works brilliantly, from the casting (not least Robert Pattinson as a deliciously detestable Dauphin) to the generally cracking script by Michôd and Edgerton, and to the thoroughly brutal and elegiac fight and battle scenes.

This fascinating documentary criss-crosses the Atlantic, enlisting type designers, graphic designers and historians to tell the story of Helvetica, a font that still looks as clean and modern today as it did when it first emerged from a Swiss type foundry in 1957. There are also forthright critiques of the font itself – and of its uses and abuses. Governments and business took to the font with fervor but this in turn brought about a backlash in circles that came to see Helvetica as a symbol of corporate evil.

*Stan is owned by this masthead.