Did you forget that Joey King played Selena Gomez’s little sister in Ramona and Beezus? Yeah, me too. It’s a totally forgivable oversight, though, if you ask me. I mean, that movie came out in 2010, which was nine whole years ago, you guys! Nine! And even though so much time has passed and King is no longer a child star, but a 19-year-old leading lady who’s currently killing it over on Netflix, The Kissing Booth actress recently copped to the fact that she still looks up to her former co-star in pretty much every way. Joey King’s comments about how Selena Gomez still inspires her will warm your cold, cold heart.

"From the time we worked together until now, I’ve always really looked up to her," King told ET on Feb. 11 while promoting her new Hulu series, The Act. "I’m really proud of everything she’s done. Everything she’s been doing lately with speaking out about mental health, I think it’s so beautiful and inspiring."

The stream queen, who has over 8 million Instagram followers thanks, in large part, to the popularity of The Kissing Booth — which was the most re-watched Netflix movie of 2018, BTW — said she also looks to Gomez as an example of how to keep all her new-found fame on social media in perspective.

3 million followers?!??! My girl Elle Evans and I are completely overwhelmed with how kind you all are!! This is crazy!! CRAZY!! Thank you so much, my heart is bursting ??

Meanwhile, though The Kissing Booth turned out to be a bigger hit for Netflix than To All The Boys I’ve Loved Before, which has already been greenlit for a sequel, King told TV Guide that she’s still waiting to find out if there’s going to be a TKB Part 2.

"Right now, we’re not really sure," she said. "[The cast] would love for that to happen, but everything is still up in the air. We’re still waiting on [Netflix]."

In case you somehow missed this little gem of a film, here’s what you need to know. The Kissing Booth movie is based on Beth Reekles’s YA novel of the same name, and it follows the story of a teenager named Elle (played by King) who begins a secret romance with her best friend’s brother who’s supposed to be off-limits.

okay but… how many of you thought Elle was going to end up with Lee? I’m curious! Most everyone seemed to be convinced when I was still uploading on @Wattpad! #TheKissingBooth

Anyway, since Netflix released the film, fans have basically been begging for a sequel, even though Reekles has not (yet) written a follow-up novel. But the 23-year-old scribe doesn’t necessarily think that’s a problem. 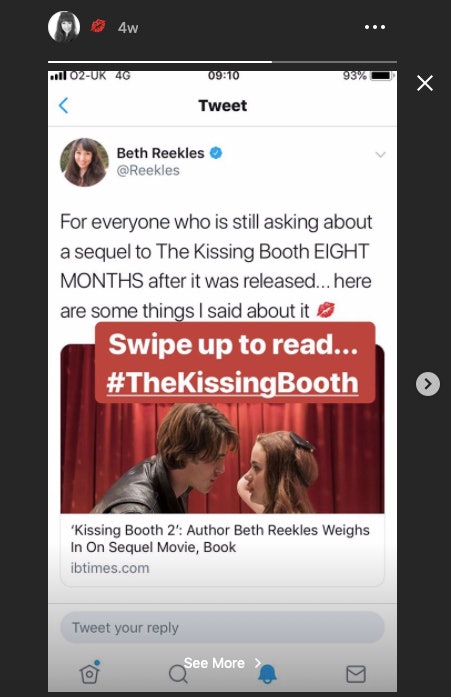 "I think there’s a couple ways that [a sequel] could potentially work," she told International Business Times back in October. "For instance, if I wrote a second book, there wouldn’t necessarily be a second movie, and equally I think there could be a second movie without me having a second book. But, at the minute, I’m just kind of crossing my fingers and hoping that someone decides that there will be one."

hey @joeyking can you stop being so darn cute for one second please, I’m tryna watch this movie

Oh, and fingers crossed for a Gomez cameo, as well.