ABC Melbourne breakfast co-host Jacinta Parsons will move to afternoons in 2020, anchoring an expanded program that airs between 12.30pm and 3.30pm.

Parsons' on-air partner, Sami Shah, will present a national drive program over summer but has not been given a permanent role. An ABC spokesman said Shah "will also appear on ABC Radio Melbourne in different roles across the year". 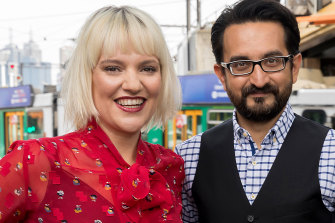 Parsons and Shah replaced long-serving breakfast presenter Red Symons in 2018. Last week, management confirmed that comedian Sammy J will take over from the pair next year, triggering a reshuffle of the station's weekday schedule.

Early afternoon anchor Myf Warhurst will not return in 2020, while Richelle Hunt vacates the mid-afternoon slot to co-host a revamped Victorian edition of The Conversation Hour with Warwick Long.

The rest of ABC Sydney's schedule is largely intact: Wendy Harmer and Robbie Buck in breakfast, Cassie McCullagh on Focus, James Valentine in afternoons, Richard Glover in drive and Simon Marnie on weekends.

"We continue to be seen as the most trusted source of information by all Australians, no matter where they live," Whelan said.

Nationally-networked programs
Continuing: Conversations with Richard Fidler and Sarah Kanowski; Nightlife with Philip Clark; Australia All Over with Ian 'Macca' McNamara; Overnights with Trevor Chappell and Rod Quinn; Weekend evenings with Christine Anu and Rhianna Patrick; AM with Sabra Lane; The World Today with Eleanor Hall; PM with Linda Mottram.