An irreplaceable collection of 3800 artworks by leading Australian artists – including Arthur Boyd, Sidney Nolan, Charles Blackman and John Perceval – has been evacuated from the fire path.

Bundanon, the 1100-hectare property that Boyd gave to the nation in 1993, has come under fire attack, the latest outbreak contained in the last half hour, Bundanon Trust's chief executive, Deborah Ely, said.

Fire had crossed the Shoalhaven River at its Eearie Park property, adjacent to Bundanon and previously owned by Sidney Nolan and Arthur Boyd in equal share, at least three times.

"A minute ago I heard it is now extinguished," Ms Ely said.

"We have been working closely with the RFS over many weeks in anticipation of a catastrophic summer. They are doing a remarkable job and have indicated that Bundanon is a priority for them in the region. However, we appreciate the situation for thousands of people on the coast and across the Shoalhaven, including our own staff, a number of whom have been evacuated for days, and others of whom are under extreme threat."

Bundanon overlooks the Shoalhaven River, which divides the property from Morton National Park. 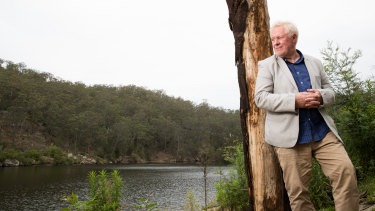 Curator Barry Pearce on the banks of Bundanon.Credit:Fairfax Media

Work was to begin this year on a new, purpose-built, underground fireproof store and contemporary gallery at Riversdale to house Bundanon's unique collection, valued at $37.5 million.

The collection includes more than 1300 works by Arthur Boyd, over 1200 works from five generations of the Boyd family dynasty and a number of works by Boyd's contemporaries, such as Sidney Nolan, John Perceval, Joy Hester and Charles Blackman. Donations from artists including Brook Andrew, John R. Walker, Jan Hendrix, Rosemary Laing and Polixeni Papapetrou also form a significant part of the collection.

Ms Ely said: "This situation is so devastating, but we have been very prepared for something like it for some time. We started removing artworks from display in late November, and yesterday moved all high-value and key artworks intrinsic to the collections … to Sydney with professional art removalists.

"It is a relief to know that the collection is now safe in Sydney storage, probably until our new fireproof collection storage facility is complete on the Riversdale site."

The Minister for Communications, Cyber Safety and the Arts, Paul Fletcher, said the works were now out of harm’s way. ''I commend the trust’s staff for moving quickly to protect this culturally important collection, which includes works by Boyd, Nolan, Blackman and Whiteley. Thank you to the Rural Fire Service for keeping a close watch on the property."

The property has remained closed to the public and artists since before Christmas.

With the art treasures evacuated, the trust of the largest cultural institution on the NSW South Coast holds grave concerns for the property and heritage buildings on site, including the 1866 Bundanon Homestead and the Boyd studio.

"We have been experiencing an incredible wave of support from the community across Australia and internationally," Ms Ely said. "Bundanon is an important place for generations of people and we hope it will be able to withstand this situation."