A disputed US election result could spark an Australian debate over whether to speak up for a smooth transition of power amid growing fears of violence if Donald Trump if thrown from office.

Former prime minister Kevin Rudd said the Morrison government should prepare to add its voice to global calls for all sides to respect the election result, saying a crisis would only help strategic rivals such as China and Russia. 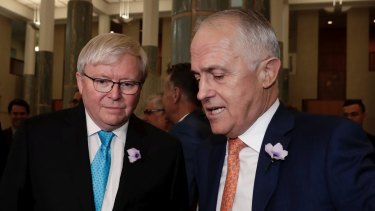 Former prime minsters Kevin Rudd and Malcolm Turnbull say Australia will need to speak up if there’s a disputed election in the US.Credit:Alex Ellinghausen

The International Crisis Group this week said global leaders should prepare to call for a smooth transfer if Mr Trump lost the election.

"Trump might try to declare victory pre-emptively on November 3, claiming that only votes tabulated that day should count, and pressuring his foreign counterparts to recognise his purported success," wrote the group's president, Robert Malley and senior director, Stephen Pomper.

"They must resist doing so. Until one candidate concedes or the process has run its course, foreign officials should refrain from making any congratulatory calls.

"And should things take a turn for the worse, those with direct channels to Trump and his inner circle should send a clear message: 'If you interfere with the vote count or refuse to accept a peaceful transfer of power, you will be on your own'."

Mr Malley and Mr Pomper are former members of the Obama administration.

Mr Culvahouse, who was appointed the ambassador two years ago, expressed concern about the violence.

"The fact that people are planning for violence is concerning, I wish it weren't the case," he said at the US embassy in Canberra on Tuesday morning.

"But look, our 68 election, our 72 elections were very contentious. Politics in the US is a rough business, in part because we don't have compulsory voting so much of what's going on is to drive turnout.

"I've been involved in the hurly-burly and I can suggest counterparts to almost everything that's been said from back over the past 50 years.

"I don't think there'll be replication of the worst days of the 60s and 70s and that's my hope and my prayer."

Our weekly newsletter will deliver expert analysis of the race to the White House from our US correspondent Matthew Knott. Sign up for The Sydney Morning Herald‘s newsletter here, The Age‘s here, Brisbane Times‘ here and WAtoday‘s here.