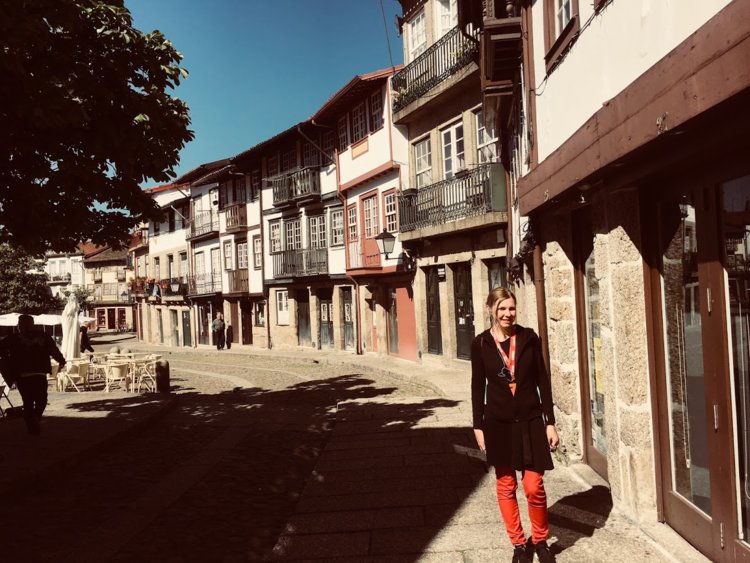 I was struggling to get up a steep cobblestone street in the medieval set-up of Castelo de Vide, a municipality in Portugal with a population of about 3,400 people.

The street was so narrow that it was just wide enough for cars to use, too. It was 70-something degrees, but the sunny sky had suddenly turned into a downpour, so my plastic flip-flops were slipping with each cobblestone step I took.

Next to me, almost three dozen people around my mom’s age, in their 70s, were managing just fine; they had on shoes better equipped for the rain, and some also used canes and walking sticks to help keep their balance.

One woman laughed as she saw me continually sliding, as though I was on a walking version of a Slip ‘N Slide. If we were racing to the top of the street, I’d definitely lose. I laughed, too, and asked her how she managed. She motioned to her cane and winked.

“But also, stay active for as long as you can,” she said. “Then, only when you need a cane, use one. They sell folding ones these days, you know. Plus, it’s good for keeping my husband in line,” she said as she tapped a man next to her on the leg with her cane.

That was Mary, 71, who was on this 10-day trip with her husband, Paul, a year younger. They’d been married for about 30 years and traveling together even longer, including when she was sent to then-Communist Russia for her nursing career and he went along. This was the 84th country they had visited, and they planned to drive around Alaska for a month after this trip.

While some people may think of blue-and-white tiles, custardy pasteis de nata, and endless sunshine when they think of Portugal, I think of 35 people with a median age of 70 and all the things they taught me over the course of a 10-day tour of the country last year.

Earlier in the year, my mom was worried she’d never see me again. In January 2017,grieving my grandmother’s death, I’dmoved to Switzerland to work as a goat-sitter. After I realized I was not a goat person, I started to country-hop — from snowshoeing in the Swiss Alps to kayaking in Croatia’s Adriatic Sea — since my remote journalism jobs allowed me to write from anywhere as long as I completed my assignments on time.

Soon, almost a year-and-a-half had passed since I’d seen my mother, who lived in Chicago. We hadn’t exactly been close when I was growing up; we lived with my aforementioned grandmother, who felt more like my mother than my actual mother.

As a digital nomad who’s become an unofficial expert atsolo female travel, I’m used to making last-minute plans around my work schedule, and I thought I’d organize the trip. But my mom had another idea: A guided tour.

Stifled, time-constricted travel? This was my worst nightmare. And, not just any tour, but one that went from the northern part of the country, Porto, down to Lisbon, almost 200 miles away. Oh, and the tour would be 10 whole days. And, my mom and I had to share a hotel room (because it was much cheaper).

On our first day of the tour, we had an orientation and I thought I’d walked into the wrong hotel conference room — everyone besides one Gen X-er was 60 or older, and the group had an average age of at least 70.

I hadn’t taken into account that I’d be in the age minority among this travel group, and I was pleasantly surprised by how rewarding the experience was.

My new friends were full of wisdom and life lessons Natalia LusinskiOn the tour bus, my mom and I decided to sit apart so that we’d be more inclined to get to know our travel-mates. Soon, they went from mere bus strangers to my new best friends.

There was a couple in their 60s who were in Europe for the first time ever; when watching the childlike wonderment on their faces as we saw one amazing thing after the next — from beautiful churches to Fado performances to drinking cherry Ginja liqueur out of miniature chocolate cups smaller than a shot glass — it was impossible to not be reminded to appreciate the little things in life.

And then there was Tom, an 80-year-old man whose wife didn’t join him on the trip because she “wasn’t much of a traveler,” but he didn’t want to miss out, he told me. “It’s good if you and your partner have common interests, but it’s OK if you have different ones, too,” Tom said.

One common theme was prevalent: Every single person on the trip said to “travel while you still can, as much as you can,” because “life is short.”

And I ended up unexpectedly bonding with my mother

As for my mother, we only had one argument in 12 days. Although I always thought we were more like oil and water than opposites attract, over the course of the trip, I discovered we had more in common than I thought: We can both talk to anybody, she was the only one to journal about the day’s activities more than I did, and we’re both obsessed with not just taking photos, but framing those photos just right. Because when the moment’s gone, the moment’s gone, and when are you going to go back to that ancient castle to retake the photo?

My mom and I also ended up laughing a lot. She’d just gotten an iPhone before the trip and had no idea how to use it — she’d often hold it upside-down or mistakenly shoot videos instead of pictures — but since her phone camera’s better, we primarily used her phone over mine. After the trip, we looked through her photos and laughed so much.

When the trip was over, guess who was sobbing in a hotel lobby in Lisbon, hugging everyone goodbye and getting all their email addresses and contact info? Yep, me. What began as a 10-day trip with strangers turned into a relationship with lifelong friends, and I was even sad to see my mom leave town, too. Instead of dreading another trip with her, we’ve starting planning the next one.

If nothing else, my Portugal trip was a great reminder to always be open to new experiences — like meeting all kinds of travelers or even bonding with an estranged parent — and to never put off traveling. As my Portugal travel-mates liked to say, “Life is short.”