There are so many bodies crammed into the Trader Joe’s that I can feel other people’s sweat on my shoulders. It’s summer, and people are dipping their foreheads into the frozen food section to cool down. It is my third trip to Trader Joe’s today; I am in my second cumulative hour of fanning myself in the aisles and shifting my weight in line. I’ll buy chocolate or flowers, just to justify the trip, but I’m not here to get groceries. I came here to be here.

The world is crumbling and soggy and hell, and Trader Joe’s is my respite from all of it. It is my version of a spa, I guess, or what yoga is supposed to do. It unstiffens me. It lets me be less. There is a rod in my spine that seems to tighten, perpetually — push notifications, climate change, existence — and it dissolves when I’m hunched over the wood bin of dried fruit, weighing the merits of blueberry or apricot. So I go there. A lot. 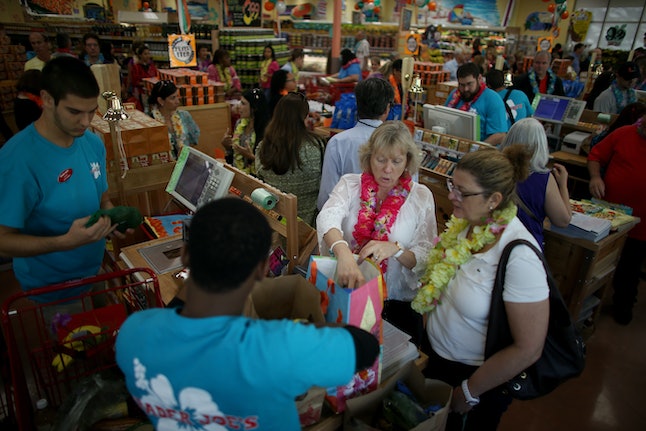 In fact, in June, right after graduating from college, I went to Trader Joe’s two or three times a day. I just didn’t know where else to go.

I moved to New York two weeks after graduation for the most boring reason: to become interesting by proximity. I rented a dorm room for the summer, which was weird after two years of living in an off-campus apartment. I went to Bed Bath & Beyond with one of my former college roommates, and helped her choose curtains and mirrors and rugs for her apartment; then I lurched back to my dorm wearing shower shoes, squelching past the RA. I felt like I was regressing. I wanted to assert my own Adultness. So my trips to Trader Joe’s seemed like conspicuous competency. I had my life together: I had plastic bags of kale to prove it.

I had spent college in a muddle, attempting to move as frantically as everyone around me without letting on that I had no idea what I actually wanted. I was always tired. I was always late. Now I was in New York for a temporary, six-month editorial fellowship, and the future gnawed at me — there were end dates. I couldn’t shake the anxiety: I wasn’t going to make it as a writer. I was here, in this city I had wanted to live in since I was a child, and I was going to find some way to mess it all up.

I wandered into Trader Joe’s every day because it gave me the stability of a to-do list. In college, the nearest TJ’s had been a 35 minute walk away; most weekends, I couldn’t spare the time. But in New York, they were everywhere. I barely noticed when the habit became a respite, when Trader Joe’s trips stopped becoming an errand and started becoming a salve. The transition was seamless the way nothing else about post-graduation life was.

I wanted to believe that I could leave the person I had been in college behind, that by abandoning the 30-cent packs of instant ramen I had subsisted on, I could morph into some better version of myself. What I needed was order, stability, the sense that I could piece my life together. What I had instead were 42 thawing dumplings. 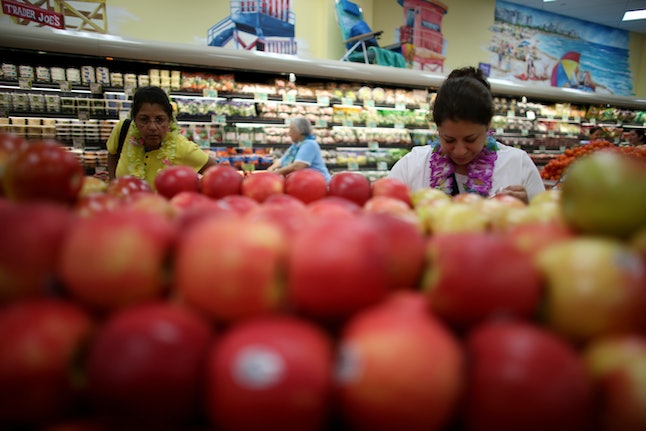 In New York, it felt like a fallacy to stand still. But in Trader Joe’s, even on a Sunday morning with a line that arched around the entire store and circled its perimeter twice, nobody could fault me for lingering by the baked goods, trying to decide between bagels or croissants. I slung a red plastic basket in the crook of my elbow and carried it until my arm drooped, weighed down by instant oatmeal and frozen soup dumplings and pumpkin cheesecake I would put back in its freezer twice before committing to buying. It was a tangible feeling of fullness, when most of my life seemed like an outline. When I didn’t have much else, I would always have Trader Joe’s.

I’m not alone in my obsession. My Facebook feed clogs with articles about new Trader Joe’s products — the pumpkin-flavored ones alone rack up hundreds of comments. On her last album, rapper Junglepussy titled a song “Trader Joe’s," with the silky lyric, “I think I love him more than I love Trader Joe’s”. There is a Trader Joe’s podcast, produced by the company itself, with a thousand five-star ratings on iTunes. The Today Show featured a couple in June that had enacted their “dream proposal” — in an Upper West Side Trader Joe’s.

I’m skeptical about a lot of companies. I mean, we all are. But there’s some collective pulse that makes us think of Trader Joe’s positively, that brings us there again and again.

At Trader Joe’s, you are part of an elaborately designed system, like being whisked through a washing machine. You can plop at the end of the enormous line at 3 p.m. on a Sunday, and still find yourself checking out in 15 minutes. What amazes me about Trader Joe’s is the confidence in its own mechanics, the glinting assertion that it will all work out. The employees usher me through three different lines, stand with signs, devise key words — two bells! — and somehow, they always succeed. It is a masterclass in sequence, in a city that always feels like it could implode.

That summer, at my fellowship, I made sure band names were spelled correctly, hunted for stray commas and uncooperative apostrophes. At night I wrote, sometimes, but mostly I checked Twitter and played dress-up, seeing how many days I could get away with wearing the same pair of shoes before anybody noticed. I liked routine, because it was easy to confuse with purpose. I woke up early and hauled my body to the park, came home late and dragged myself through Trader Joe’s. I was tame and collected; I chewed Vitamin C. I called Ubers and tracked them closely, watching my avatar self float back toward the Upper West Side. I would tilt my head against the window and squint until New York — New York! — was reduced to just lights, and a budding hangover, and lotion-coated sweat. 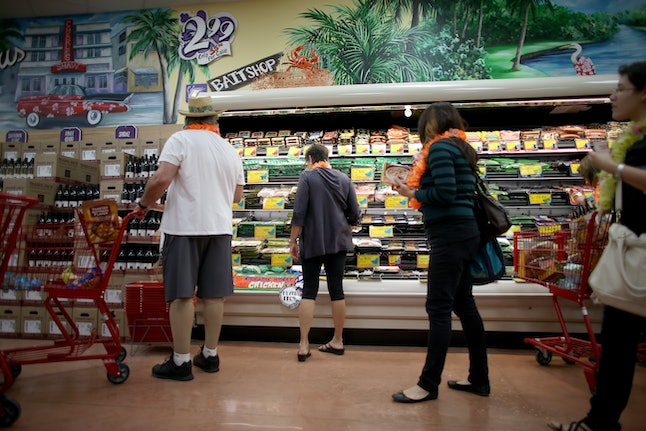 In the six months since graduating, I’ve been to about 10 different Trader Joe’s throughout the city. I don’t want to calculate how much money and time I’ve spent there. Spending so much time there is weird — I get that. But I needed a place. A reminder to breathe. Everyone needs a safe space, I guess, and mine has convenient locations throughout the five boroughs.

Trader Joe’s was patient and comforting and constant, more of a consistent presence than anything else in my life. It was there when I went through my first post-grad breakup: I bought $5 flowers for myself and cried by the cereals. It was my refuge during the Kavanaugh hearings. When I fought with my friends or was turned down from a dream job or felt deflated on the subway after another lackluster Hinge date, Trader Joe’s was my first stop. I’m a 22-year-old who spends more time in Trader Joe’s than in bars. I’m probably wasting my youth. I think I’m OK with that.

Those first months after graduation, I felt my thoughts spiral in hazy spurts. The subway will collapse, I told myself, listening to it pulse. But it didn’t. I was always on time. A guy I dated took me to a Drake concert, thousands of people packed into the arena, and I thought about all the ways we could be hurt together — bombs, guns, grenades — until my legs bucked and twitched. I tried to make it look like dancing.

A few days later at Trader Joe’s, there were a mother and son hunched over greeting cards, reading their puns aloud to each other. I reached for the 99-cent dark chocolate peanut butter cups at the same time as another woman, and we giggled at each other, crinkling our separate bags. The cashier asked about the sample, told me he was from L.A. — where it’s warm, he said, where he’ll go again. I felt soothed and sedated, until I wasn’t. I lifted my bags with both arms and stepped into the street.