Put your points on paper, wear red lipstick and use personal pronouns: Legal experts reveal how you can win an argument EVERY time

Whether you thrive on tense discussion or loathe confrontation, arguments are simply a fact of life.

We talk things out to resolve tension, better understand one another and reach compromise.

But if arguing is not your forte, fighting can leave you emotionally drained and in a worse position than you had been to begin with.

Legal professionals from Queensland and Victoria recently revealed how to come out on top and get what you want from your next spat. 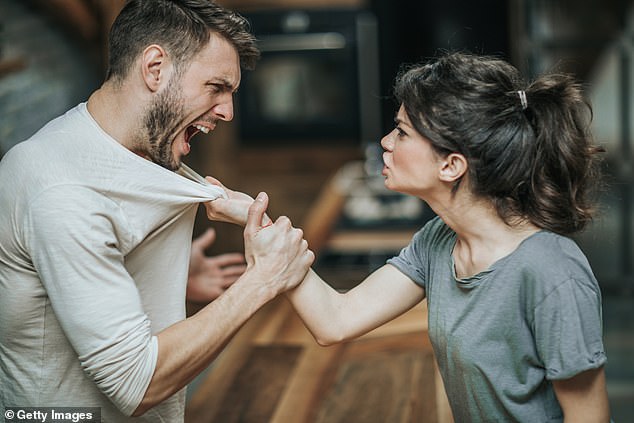 Arguments can leave you emotionally drained if you go about them in the wrong manner, but lawyers are on hand to offer expert advice about shaping your point of view (stock image)

1. KNOW WHAT YOU’RE ARGUING ABOUT

When emotions are involved, it’s easy to lose sight of why the argument started in the first place.

Amy Honan, Accredited Family Law Specialist from Brisbane-based Michael Lynch Family Lawyers, told Honey it’s vital to plan your discussion in advance to reflect on what the issue really is.

She recommended brainstorming the points you wish to make, opening your conversation with the strongest.

When it comes to online arguments, researchers previously told Daily Mail Australia that the first person to reply to a thread had a greater chance of winning the debate than those who joined later on, meaning timing is key.

2. KEEP YOUR EMOTIONS IN CHECK

It’s always a challenge to keep a level head during a heated discussion, but Ms Honan said no matter how intensely you want to shout, it’s important to maintain a sense of calm and stick to the facts.

‘People often go wrong arguing when it becomes too personal – they lose perspective with what they are trying to say,’ she said.

Remaining emotionally unattached is how lawyers successfully argue cases, so try to think of yourself as standing in a courtroom batting for a client next time you feel the urge to lash out verbally.

What are the best ways to win an argument every time?

Timing: Typically, the first person to reply to the thread has a greater chance of swinging the original person’s (OP) view than someone who joins the debate later on.

Alternative terminology: Use words that are different to those used in the post.

For example, if discussing climate change, describing it as global warming in a reply makes more of an impact than using the same terminology as the OP.

Use calm language: The study suggests using ‘calm’ language to make a point is more effective than swearing or using aggressive terms.

In the paper, examples of ‘calm’ words include those that are softer-sounding such as ‘librarian’ and ‘dull’ than harsh, ‘sharp’ words such as ‘terrorism’ and ‘erection.’

Length: Longer replies in general also tend to be seen as more persuasive.

To push this point, commenters should specifically write ‘e.g’, ‘for instance’ or ‘i.e’ before presenting these arguments to strengthen their persuasiveness.

Links: Quotes and quotation marks play little role in trying to convince someone, but linking to examples and outside sources does.

Hedge your bets: Hedges indicate uncertainty, and an example is: ‘It could be the case’.

Although this sounds like it might signal a weaker argument, the researchers said it may make an argument easier to accept by softening its tone.

Check the language in the original post: People can ‘pick their battles’ and decide whether or not it’s worth engaging in an argument by studying the terms used by the OP.

Personal pronouns, such as ‘I’ suggest a person is more open-minded to persuasion, but the use of the words ‘we’ and ‘us’ suggests they are more stubborn.

Stubborn people use more emotive and decisive words including ‘certain’, ‘nothing’ and ‘best.’

Know when to give up: Finally, the researchers found that after four or five ‘back and forth’ posts have been made, the chances of swaying someone’s view significantly drops.

Research has shown that locking eye contact during an argument can actually provoke an already hostile situation further.

Ms Honan told the publication that planning an outfit which makes you feel cool, collected and confident beforehand.

Studies have shown the colour red works well for enhancing your self-esteem, so a red shirt or slick of rouge lipstick would do the trick.

She also advised watching your posture and standing tall to ensure you exude authority.

Although some people are confident verbal communicators, others find it easier to express their emotions in writing.

She stressed the importance of being clear and concise, and using the words you write as a framework for your discussion.

In online discussion, studies show the use of ‘calm’ language in making a point is more effective than using aggressive terms or resorting to swearing.

Examples of ‘calm’ words include soft-sounding adjectives like dull and terms such as ‘librarian’ as oppose to harsh words including ‘terrorism’ and ‘erection’.