HollywoodLife spoke EXCLUSIVELY to sources who say that Scott Disick isn’t ready to settle down despite his latest flirty exchange with model Amelia Hamlin.

Scott Disick, 37, and Amelia Hamlin, 19, may not have been spotted out together recently but that doesn’t mean they’re not on each other’s radar. Scott dropped a seemingly flirty comment on Amelia’s Dec. 16 Instagram post however a few sources close to the Keeping Up With the Kardashians star EXCLUSIVELY told HollywoodLife that Scott “isn’t interested” in settling down right now. But that doesn’t mean he’s ready to quit the flirt fest with the stunning daughter of Lisa Rinna.

“Scott isn’t looking to get into a relationship at this point, but he’s having fun casually hanging out with Amelia when he can,” a friend of the reality star said. “Of course he thinks she’s attractive, what guy wouldn’t? But as far as a serious commitment or anything, that’s not what he’s interested in or where he sees this going and he feels they’re on the same page. Scott thinks Amelia is a really cool girl and she’s fun but he’s just focused on his kids and celebrating the holidays with them for now.”

Another friend of the Flip It Like Disick star said, “Scott is looking to end this year as a bachelor. It works for him. He is going to be with family for the holidays and is going to enjoy the normalness of 2020 anywhere he can get that. He will continue to flirt with Amelia and talk to her but it is not anything serious. Scott is playing it all as it comes and is not looking to fall deep in love with anyone right now.” 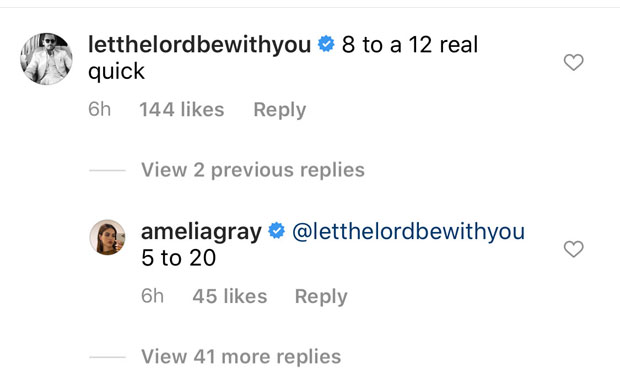 Although the genetically-gifted celebs haven’t been spotted out and about together lately, Scott left a comment on the model’s Instagram post which showed Amelia looking gorgeous as ever. “8 to a 12 real quick,” the Talentless entrepreneur wrote. Amelia then appeared to joke back, “5 to 20.” Their exchange comes a month after the pair seemingly confirmed a romance during a sexy beach date on Nov. 17. Scott — who shares kids Mason, 11, Penelope, 7, and Reign, 5, with ex Kourtney Kardashian, 41 — placed his arm around the bikini-clad beauty as they strolled down Malibu’s sandy shoreline.