Let’s be honest: it was never going to be easy to say goodbye to Rick Grimes. After eight seasons of cheering for him, grieving with him, and traveling beside him through the zombie-infested ruins of the apocalypse, no single episode could do justice to all we’ve been through together or what his departure means for The Walking Dead.

That said, the show’s writers definitely gave Andrew Lincoln‘s farewell episode their best shot — with lots of help from some familiar faces. Here’s how AMC’s undead drama said a long goodbye to the show’s hero, on “What Comes After.”

When we last saw Rick, he’d just impaled himself on a piece of rebar. Resourceful fellow that he is, our hero opened this episode by waking up and wrestling himself free. Re-mounting his horse (and bleeding heavily from the abdomen), he resumed leading the zombie herd away from the Hilltop, but also hallucinating to beat the band. For the next forty minutes, Rick wavered in and out of consciousness as he fled for his life down a mind-path lined with the dead. 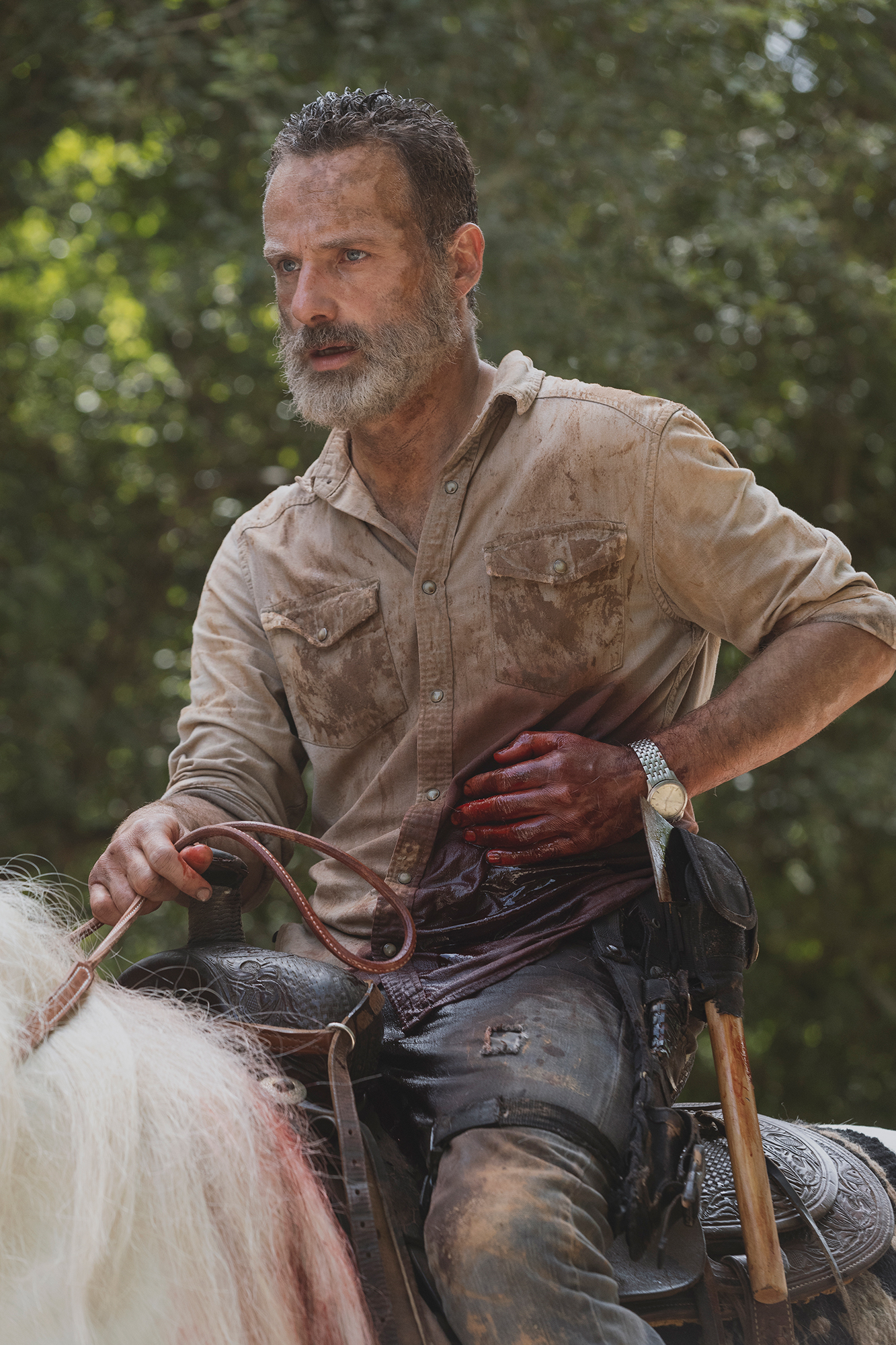 Where It All Began

In a flashback to The Walking Dead pilot, Rick was suddenly back at the beginning of it all. Inside a police cruiser, he and partner Shane (Jon Bernthal) staring at an overturned car. Shane returned for a quick heart-to-heart with Rick — about life, death, rage, loyalty, and who Judith’s bio-dad really is. (Yeah, he went there.)

“One could argue it’s my family you’re looking for, right?” Shane quipped back. “How is my baby girl, by the way?”

Despite there being plenty of reasons for awkwardness — not just Judith’s parentage, but the part where Rick and Shane’s last conversation ended with Rick murdering his friend in the middle of a field — it was a touching interlude … right up until Shane suddenly screamed, “Wake up!” and Rick found himself back in the present, about to be mauled to death by walkers. (And, I hope you liked this plot device, because there’s a lot more where that came from.)

Fleeing again from the zombie herd, Rick finally got far enough ahead again to safely pass out and visit with a couple lost comrades. First, he watched a sunset and talked about regret with good old Hershel Greene (Scott Wilson, in a final performance before his death last month); then, he stepped through that iconic door from Season 1. This time, it read “DON’T OPEN, DEAD INSIDE,” while in the first episode, it read “DON’T OPEN, DEAD OUTSIDE.” Rick found himself in a field of corpses of his own family and friends, chatting with Sasha (Sonequa Martin Green).

“You did your part,” she told him, even as Rick insisted he wasn’t done. And he wasn’t – not yet. “Wake up,” Sasha said, and Rick did — in the ransacked bridge-builder’s camp, with the herd still coming.

With no other option, Rick finally had to do the unthinkable: lead the herd across the bridge, and hope it would collapse. He paused midway for a final hallucination — an embrace with Michonne (Danai Gurira), who told him, “It’s not over” — but as the zombies started crossing and Rick’s friends arrived to help, it all went terribly wrong. Instead of buckling under their weight, the bridge held, and Rick saw what had to be done. Sticks of unused dynamite had fallen on the bridge, and as he locked eyes with Michonne for the last time, he smiled.

“I found them,” he said. He then fired and the bridge went boom. 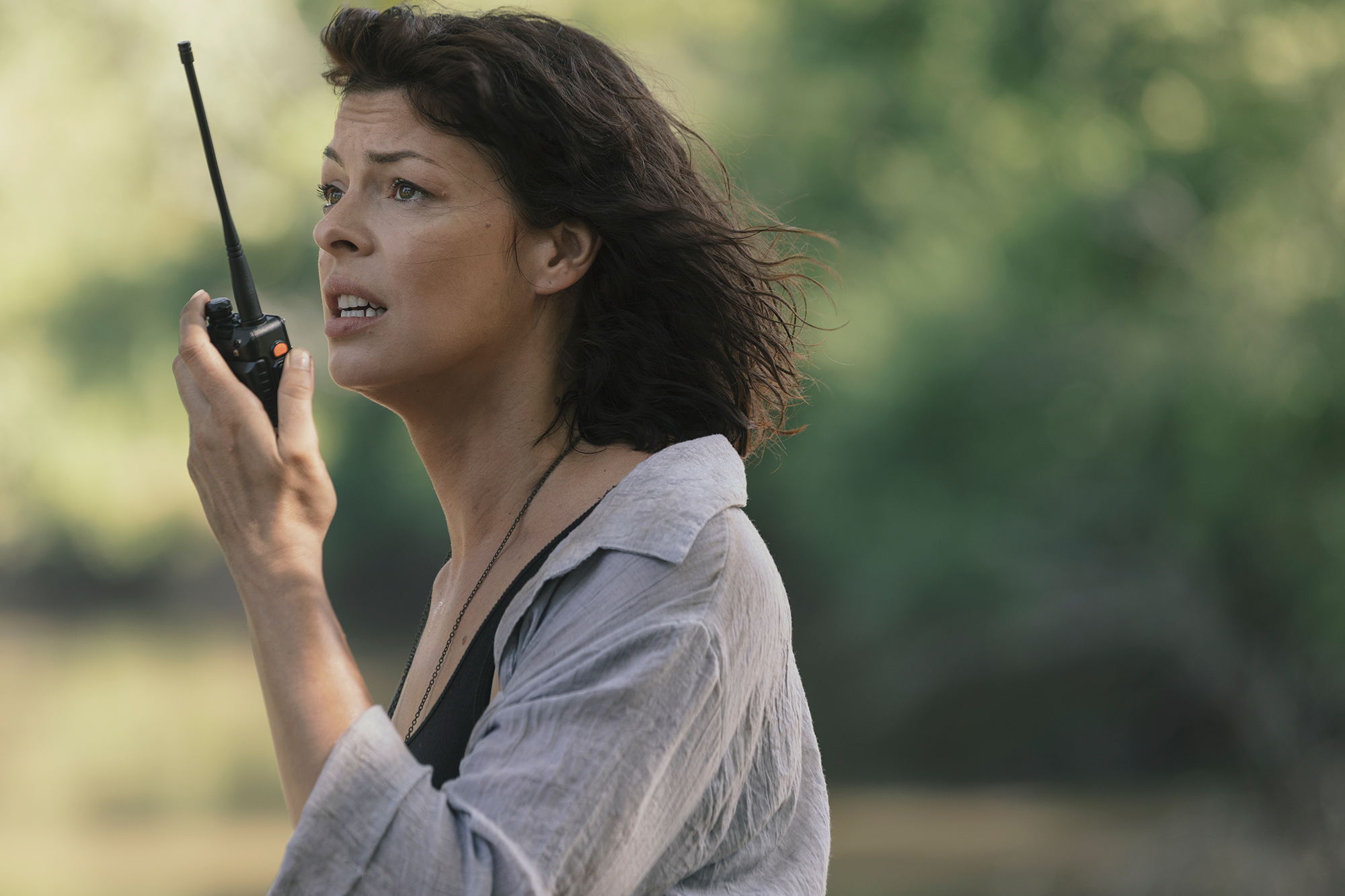 Let’s start with the good news: Rick Grimes isn’t dead. Found by Jadis (Pollyanna McIntosh), barely breathing on the banks of the river, we last saw our hero being airlifted away on that mystery chopper to … well, somewhere. But while the door remains open for an eventual resolution to the Rick Grimes plotline, the show and his friends had to go on without him. And after a brief fade to black, we got a jarring transition: a group of brand new characters battling for their lives in a field full of zombies. Surrounded on all sides, they prepared for the end — until a gunshot rang out, a child’s voice called to them from the forest, and the newbies found themselves face to face with a little girl.

Who is this plucky 9-year-old with the deadshot aim and the sheriff’s hat? You guessed it: Judith Grimes.

And that’s how The Walking Dead pulled off its saddest goodbye, then catapulted us five years into the future before we even had time to grieve. Meanwhile, his entire family thinks he’s dead. So, what does this Rick-less future look like? We’ll have to wait until next week to find out. (Plus, Rick-filled movies? Yes, please.)

The Walking Dead airs on AMC Sundays at 9 p.m. ET.

For the latest TV news and interviews, subscribe to our new podcast “Watch With Us” below!