Law enforcement members turned out in force in Southern California Thursday to say goodbye to one of their own. His act of courage gave others the chance to escape a gunman.

Sheriff’s Sgt. Ron Helus, 54, was one of the first officers to respond last week to the crowded Borderline Bar & Grill to confront a gunman on a deadly rampage. When it was all over, the gunman was dead, but so was Helus. He was the last of 13 to die.

Hours later, thousands lined the streets and bridges as his hearse left the hospital where he was pronounced dead to pay respects to a man who sacrificed his life to save so many others.

On Thursday, that same community bid the ultimate of farewells to the 29-year police veteran and married father on the cusp of retirement the day he became the 48th officer shot and killed in the line of duty this year. 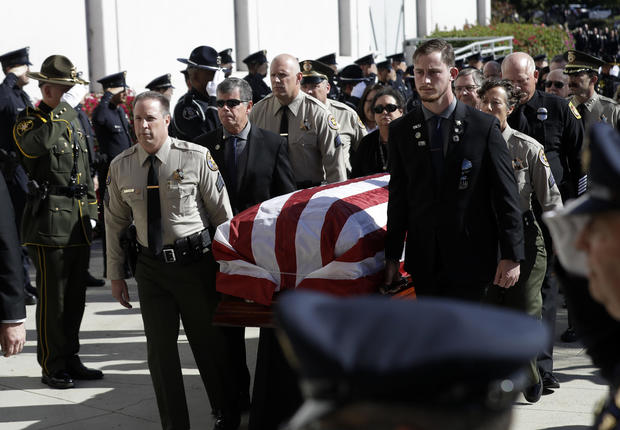 A casket with the body of Ventura County Sheriff’s Sgt. Ron Helus is carried into the Calvary Community Church on Thu., Nov. 15, 2018, in Westlake Village, Calif.

“Ron entered to defend the defenseless and save their lives, and lives he did save,” he said.

Helus leaves behind a 29-year-old son and a wife he had known for 31 years. His last words to her were in a phone call: “I love you. I’ll talk to you later.” He then hung up and responded to the radio call that would be his last. 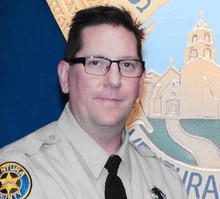 Friends of Helus often heard him say, “Support your team, complete your mission, go home to your families.”

Helus didn’t just speak those words — he did his best ever day to live them.

“If you called him a hero, he’d probably laugh at you and say he was just doing his job,” said Pastor Charlie Maloney.