Gomez’s fans have accused the new series of making inappropriate references to Gomez’s health. In 2017, Gomez underwent kidney transplant surgery due to her struggles with lupus. Gomez has been very open about her health, and she revealed she was in recovery after receiving a kidney transplant on Sept. 14, 2017. In her Instagram post, she explained why she’d been M.I.A. from social media, and shared the kidney was donated to her by her friend Francia Raisa.

The Saved by the Bell scenes at the center of this controversy include two students arguing over who donated a kidney to Gomez and some background graffiti. The arguing students bring up Justin Bieber’s mom, and fans of Gomez know that breakup was messy enough. “I know for a fact that Selena Gomez’s kidney donor was Justin Bieber’s mom. God, I wish that I had my phone so that I could prove it,” says one student. The second student in the conversation replies, "Prove what? That you’re an idiot? It was Demi Lovato’s kidney. They’re best friends like you and I were.”

There’s another scene in the show where writing on the wall of the school hallway reads, “Does Selena Gomez even have a kidney?"

The show launched on Peacock, the streaming service owned by NBCUniversal, on Wednesday, Nov. 25. 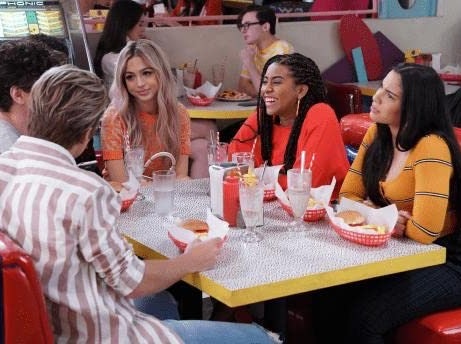 Both of those scenes have fans really upset:

"RESPECT SELENA GOMEZ" began trending on Twitter shortly after the series premiered, as fans argue the scenes were disrespectful to Gomez:

Fans brought up the seriousness of Gomez’s surgery and her battle with lupus in response to the show’s jokes:

As of publication, Peacock has not issued a statement about the scenes with jokes about Gomez, nor has Gomez herself acknowledged the series.

Whatever the case about the jokes in Saved by the Bell, Selenators always have Gomez’s back, and it’s clear they want her to be respected.