Woolworths Group has uncovered several instances of forced labour in its audits while Wesfarmers has acted on hundreds of critical breaches, including allegations of excessive overtime, unauthorised subcontracting and bribery. 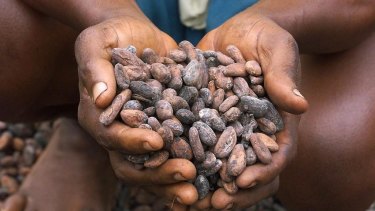 Woolworths found its seafood, cocoa and nuts suppliers in Bolivia, Ivory Coast and Vietnam had exposed its companies to extreme risks of forced labour.Credit:AFP

The federal government's mandatory reporting system has forced the nation's biggest companies to investigate a range of serious exploitative practices such as human trafficking, slavery, forced labour and debt bondage in Australia and overseas.

It will on Wednesday build on laws that require companies with turnover of at least $100 million to report on the risks of modern slavery in their operations and the steps taken in response, with a new five-year action plan involving government, communities, unions and business to further crack down on worker exploitation.

Unions and humanitarian groups say the coronavirus pandemic, which has put unprecedented pressure on supply chains, has highlighted the importance of ensuring the human rights of workers are upheld.

About $US150 billion ($203 billion) a year is generated in the global private economy from forced labour alone, with almost 25 million people in the Asia-Pacific region estimated to be enslaved in global supply chains.

"Modern slavery has no place in our society. This is why we have been relentless in our opposition to these grave violations of human rights through implementing a strong program of initiatives to combat modern slavery in Australia and abroad," Assistant Minister for Customs, Community Safety and Multicultural Affairs Jason Wood said.

The government will outline its own efforts to fight slavery throughout its procurement activities, focusing on high-risk areas in investments, textiles, overseas construction, and cleaning and security services.

Woolworths Group, which includes its supermarkets, Big W and Dan Murphy's, revealed it had confronted six suppliers from Malaysia, where workers from Myanmar were reimbursed thousands of dollars each in recruitment fees.

The company said it was watching for increased human rights risks relating to climate change, cotton sourced from China and the management of COVID-19.

It also found its seafood, cocoa and nuts suppliers in Bolivia, Ivory Coast and Vietnam had exposed its companies to extreme risks of forced labour.

"This is due to the inherent risks in agriculture, high levels of product exported from high-risk countries and substantiated cases of forced and child labour associated with a product category," its report said.

It found five non-food categories had "extreme risks of forced labour" and following allegations of forced labour in Xinjiang province in China, it had started tracing its garment supply chain there.

"We have no direct suppliers producing goods in Xinjiang and are conducting further due diligence on cotton sourced as a raw material," it said.

Unchained founder and chief executive Stephen Morse said exploitation in Australia took on many forms, with the Australian Institute of Criminology estimating that between 2015 and 2017 there were up to 1900 victims of modern slavery in the country.

He said a recent report showed the overwhelming majority of international students were still subject to wage theft and poor employment conditions.

"There are some shining lights in leadership on this issue from some of our biggest companies but many are still falling short," Dr Morse said. "There is some way to go but we are taking some positive steps."

Wesfarmers, whose stores include Bunnings, Kmart, Target and Officeworks, identified more than 340 "critical breaches" across 105 suppliers in the 2020 financial year.

Its audit found the biggest risk in its Australian workforce, usually through third parties, was migrant labour exploitation through cleaning contractors.

"There is both a moral and a business case for the steps we are taking to identify, report, address
and ultimately eliminate any exploitation of vulnerable people with whom we may be involved, directly or indirectly, overseas or at home," Wesfarmers chairman Michael Chaney said.

The report found Wesfarmers' supply chains risked exposure to human trafficking through apparel purchasing in Cambodia, as well excessive overtime in Bangladesh and Vietnam. Four critical breaches related to three suppliers that were "exited" immediately and no further supply orders were placed at the remaining 17 suppliers with 40 critical breaches.