George Mendonsa, who made the most credible claim to being the sailor shown kissing a woman in Times Square after the end of World War II in a photograph that became a national emblem of elation, died on Sunday at a nursing home in Middletown, R.I. He was 95.

He died after a seizure, said Lawrence Verria, who with George Galdorisi wrote “The Kissing Sailor: The Mystery Behind the Photo That Ended World War II” (2012).

The illustrious Life magazine photographer Alfred Eisenstaedt took the photograph on Aug. 14, 1945, moments after word reached the public that the Japanese had surrendered. Times Square was thronged with people celebrating the end of the war, and Eisenstaedt’s series of four photos showed a uniformed sailor grabbing a woman in a nurse’s outfit, bending her back and kissing her deeply. The two anonymous people appeared to embody the exuberance of the moment, and the photograph appeared on a full page in Life.

Eisenstaedt did not record the names of the impromptu kissers; their identities have been debated for decades. Three women have made tenable claims that they were the woman in the photo; many people who have studied the matter believe that she was most likely Greta Friedman.

In 1980 Edith Shain told Eisenstaedt she was the woman in the photo, and Life ran it again, asking the sailor to identify himself to the magazine. Dozens of men came forward, at least 11 of whom made reasonably credible claims that they were pictured, but Mr. Mendonsa was adamant he was the one. He sued Life in the 1980s when the magazine would not definitively acknowledge he was the sailor, though nothing came of the lawsuit.

“How many people in a lifetime do something famous?” Mr. Mendonsa asked in an interview with The Daily Mail in 1995. “There isn’t a Navy man alive who didn’t serve in World War II who hasn’t looked at that photo and said, ‘I wish I were that guy.’ I was not looking for any financial gain. I only wanted the recognition.”

Mr. Mendonsa eventually received recognition from most parties, after extensive testing. Among other efforts, in 2005 his face was painstakingly 3-D mapped, then reverse-aged, to show that it matched the sailor’s in Eisenstaedt’s picture. Four years later Norman Sauer, a forensic anthropologist at Michigan State University, analyzed the photo and said he could not find a single inconsistency between Mr. Mendonsa’s face and the sailor’s.

“The evidence is of an overwhelming nature,” Mr. Verria said in a telephone interview on Monday. “No matter how you look at this, the story he gives, the physical oddities that are unique to him, the fact that several experts in different fields have looked over this case and have come to the conclusion that it is George Mendonsa.” 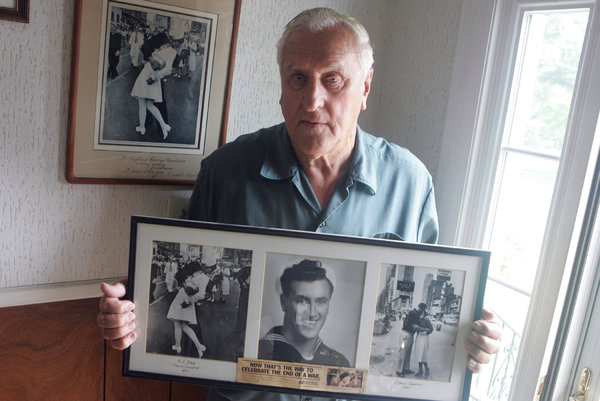 That honor might seem dubious, given the photo’s darker connotations. An article about the photo in 2014 on the website of Time, whose parent company stopped publishing Life in 2000, said that “many people view the photo as little more than the documentation of a very public sexual assault, and not something to be celebrated.”

“It wasn’t that much of a kiss, it was more of a jubilant act that he didn’t have to go back, I found out later,” Ms. Friedman said in a 2005 interview for the Veterans History Project. “The reason he grabbed someone dressed like a nurse was that he just felt very grateful to nurses who took care of the wounded.”

Mr. Verria said that Ms. Friedman and Mr. Mendonsa became friendly and stayed in touch after meeting in 1980, and remained close until Ms. Friedman’s death in 2016.

Ms. Friedman told The Navy Times in 2012 that the day was so momentous that she understood Mr. Mendonsa’s excitement. “I can’t think of anybody who considered that as an assault,” she said. “It was a happy event.”

George Mendonsa was born on Feb. 19, 1923, in Newport, R.I., to Arsenio and Maria Mendonsa, immigrants from Portugal. His father was a fisherman, and George dropped out of high school to take up the trade before he enlisted in the Navy in 1942.

He served as a quartermaster on the Sullivans, a destroyer in the Pacific. He was steering the ship in 1945 when an aircraft carrier was struck by kamikaze fighters, and he had to help more than 100 American sailors floating in the water reach a nearby hospital ship, where he saw nurses caring for the badly wounded.

“I believe from that day on I had a soft spot for nurses,” Mr. Mendonsa told the Veterans History Project in 2005.

Mr. Mendonsa was on leave and with a new girlfriend in Times Square on V-J Day. They were watching a show when victory was declared, and they rushed to a nearby bar before the kiss.

Mr. Mendonsa’s girlfriend, Rita Petry, supposedly saw the kiss happen but apparently did not mind. They married in 1946, after Mr. Mendonsa was discharged, and he returned to professional fishing.

She survives him, as do a daughter, Sharon Molleur; a son, Ron; a sister, Hilda Todd; three grandsons; and four great-grandchildren.