I don’t know much about how being a celebrity works, but I assume you want George Clooney in your corner. The famous heartthrob and iconic actor just casually spoke out about the Duchess of Sussex and the terrible time she’s had combating the negative crap her father and half-siblings have spewed about her in the media. If you’ve been following Meghan Markle at all, you know she’s had a hell of a time since marrying Prince Harry. Fortunately, George Clooney’s comments defending Meghan Markle from her family are a refreshing turn of events for everyone and will hopefully urge the peanut gallery to pipe down.

The facts are Meghan’s father Thomas Markle Sr. and her half-sister Samantha Markle have gone out of their way to drag Meghan in the press. Her father’s continued narrative is that Meghan is a neglectful daughter who is "ghosting" him. Samantha Markle has called her everything from an opportunist to a liar and continues to capitalize on her sister’s fame by speaking to the press. She is also reportedly writing a "tell-all" book about growing up with Meghan that is theorized to make her tons of money.

You know it’s a cold day in Hollywood when someone with as much clout as Clooney has to get involved.

George Clooney and his wife Amal are longtime friends of Meghan and Harry’s and even attended their wedding as guests. During a recent press panel, multiple publications reported Clooney brought up Meghan’s family drama and spoke about how truly wrong he thinks it all is. Clooney explained, 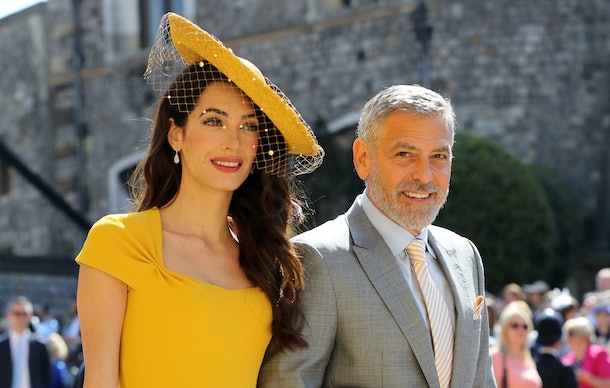 Clooney also touched on the personal letter Meghan reportedly wrote to her father that has since been published, as he put it, "everywhere." He continued, "I can’t tell you how frustrating it is to see that. You’re taking a letter from a daughter to a father and broadcasting it everywhere. She’s getting a raw deal there, it’s irresponsible. I’m sort of surprised by that."

In the reported letter shared by The Daily Mail, Meghan allegedly addressed Thomas Markle’s allegations claiming she did not reach out to him after learning he had a reported heart attack prior to their wedding, their financial disputes, and his general shady narrative about her.

The note states, "It is with a heavy heart that I write this, not understanding why you have chosen to take this path, turning a blind eye to the pain you’re causing…Your actions have broken my heart into a million pieces." Elite Daily previously reached out to the Kensington Palace for comment on the reported letter, but did not hear back by the time of publication.

Fortunately, Clooney is one of the many friends that have popped up to defend Meghan as of late. The continued hope is that her family quiets down and that she and Harry can happily move forward together as a growing family.