A former Romanian royal who is a distant cousin of the Queen has welcomed his first child with his wife, 18 months after admitting he had fathered a three-year-old girl illegitimately.

Nicholas Medforth-Mills, 34, who now lives in the UK, is the grandson of King Michael, Romania’s last king and a distant cousin to Queen Elizabeth II, announced  his wife Alina-Maria Binder had given birth yesterday.

Sharing a statement on Facebook, he wrote: ‘It gives me great pleasure to announce the birth of my daughter, Maria Alexandra, on 7th November at 20:05 at the Polizu Hospital in Bucharest.’

In May 2019, the former prince, the first child of Princess Elena of Romania and her first husband Robin Medforth-Mills, recognised he fathered a daughter, named Anna Iris, four, with Nicoleta Cirjan after undertaking a paternity test. 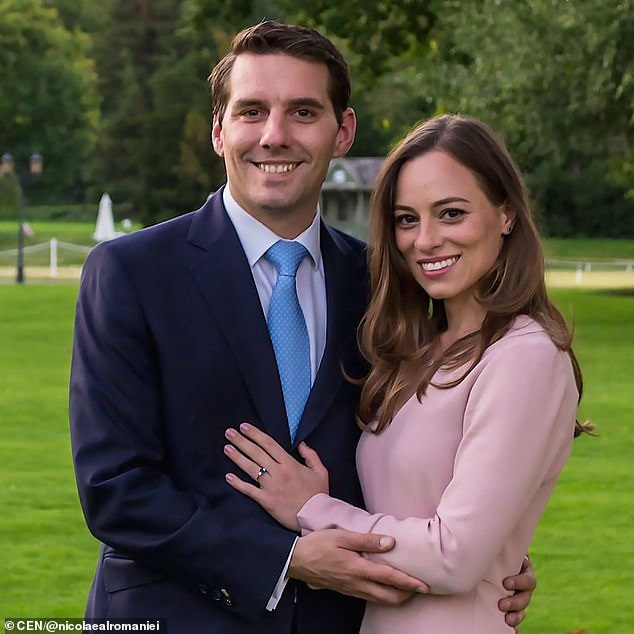 Nicholas Medforth-Mills, 34, who is a distant cousin of the Queen has welcomed his first child with his wife Alina-Maria Binder, 18 months after admitting he had fathered a three-year-old girl illegitimately

Announcing the birth of his daughter online, Nicolas wrote: ‘Alina-Maria and our daughter are both well and healthy.

‘This is a very special moment for our family and we are grateful for the support and shared excitement of Romanians, but especially the efforts of the medical staff during these challenging times.’

Medforth-Mills is King Michael’s only grandson and would have been third in line for the Romanian throne if it still existed.

The former English public schoolboy, who lived in Britain after the age of five, is a graduate of Royal Holloway, University of London. 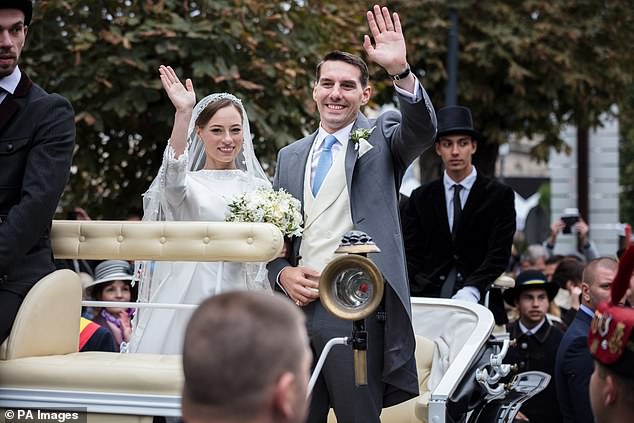 The couple married in Sinaia in September 2018, with many hailing them Romania’s answer to Prince Harry and Meghan Markle

He met now-wife Alina-Maria in 2014, before Romania’s Royal House announced its decision to disinherit him in August 2015.

He was removed from the line of succession to the symbolic Romanian throne and he was also stripped of the ‘Romania’s Prince’ and ‘Royal Highness’ titles.

At that time, reports hinted there was a controversial relationship between the former heir and Nicoleta.

He married to aviation PR consultant Alina-Maria in 2018, with many hailing the couple Romania’s answer to the UK’s Prince Harry and Meghan Markle.

Medforth-Mills’s good looks, down-to-earth manner and love of cycling and ecology endeared him to Romanians. 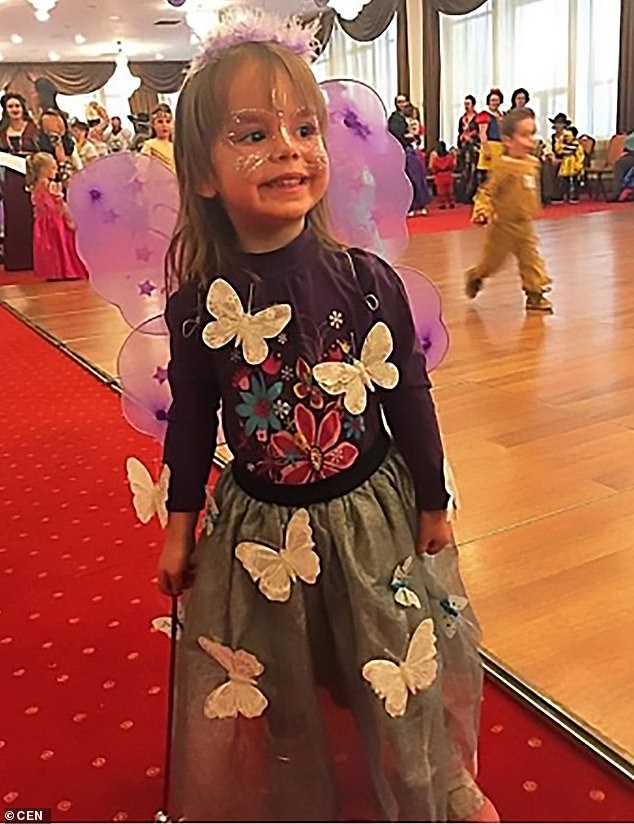 In May 2019,  Nicholas acknowledged he had a three-year-old daughter after taking a parternity test, saying: ‘The result is positive, I am the father of the child.’

On Facebook he said: ‘Following persistent requests to conduct the paternity test of my alleged child, Mrs Nicoleta Cirjan has accepted.

‘The result is positive, I am the father of her child. Given the context in which this child was born, the fact that I have had no relation with the mother, I have assumed the legal responsibility to the child.’

‘For reasons related to protecting the superior interests of the child, I believe that any issue about the child’s life is strictly private. 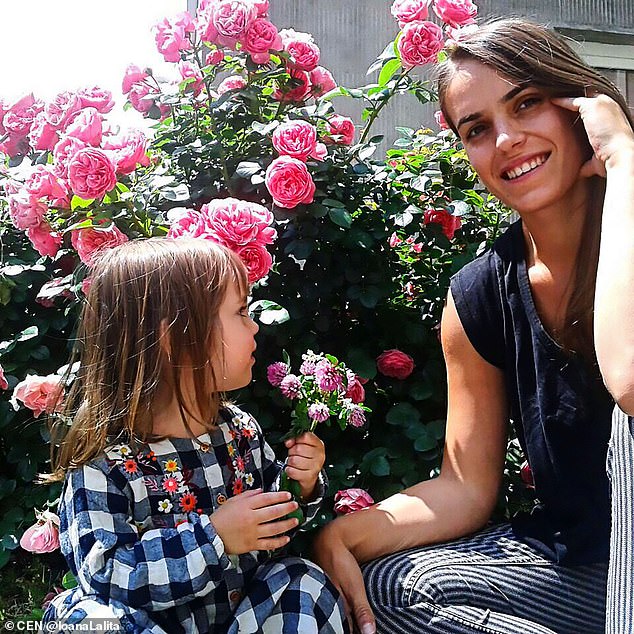 ‘With the wish to protect the child and avoid risks that may be provoked by media or bullying, I have decided to cease any comments on this subject.’

Nicholas’s mother, Princess Elena, claimed that former King Michael had not wanted to see Nicholas when he was alive because of his grandson’s ‘behaviour which lacks some moral principles’.

She added that the King had been ‘deeply saddened that he (Nicholas) did nothing to sort out the paternity of his alleged child’ which ‘reveals an unacceptable lack of responsibility’. 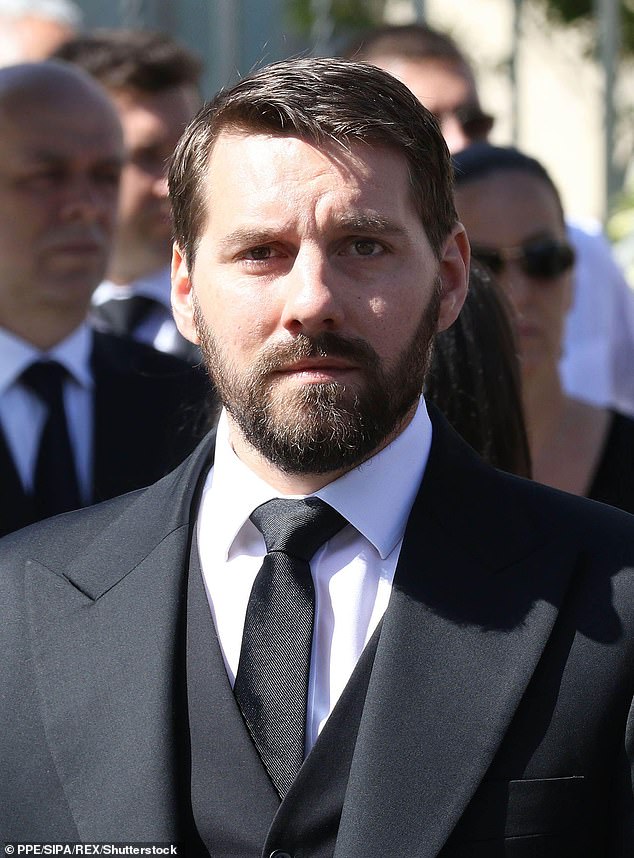 In August 2015, Romania’s Royal House announced its decision to disinherit Nicholas (pictured). He was removed from the line of succession to the symbolic Romanian throne and he was also stripped of the ‘Romania’s Prince’ and ‘Royal Highness’ titles

Nicholas’ daughter Anna Iris lives with her mother in the city of Brasov.

Nicoleta wrote on social media after Nicholas’ recognition of paternity: ‘A most surprising day, from which I learned a lesson about patience and about having confidence that the truth will always prevail.’

Prince Charles is an avid fan of Romania and he frequently visits the country, he even attended King Michael’s funeral in 2017.

King Michael I was the country’s last king. He occupied the throne during 1927-1930 and again from 1940 until 1947, when communists forced him to abdicate.

A descendant of the German Hohenzollern dynasty and a cousin of Britain’s Queen Elizabeth, Michael was in his early twenties when he participated in a 1944 coup that overthrew fascist leader Marshal Ion Antonescu.

Romania then broke with Nazi Germany and switched to the Allied side.

Historians have said his actions might have shortened the war and saved thousands of lives.

After his abdication, Michael spent decades in exile working as a chicken farmer and aircraft pilot, living in Britain and settling in Switzerland.

He finally returned to Romania in 1992 and regained citizenship in 1997, eight years after the collapse of communism.

Successive Romanian governments have returned castles and other properties that were seized from the royal family when the communists came to power.

The Hohenzollern-Sigmaringen dynasty that ruled Romania from 1866 until Michael’s reign ended in 1947 no longer enjoys special status.

Romania is a republic and the monarch no longer has any constitutional powers, but Romanians associate their royal family with an elegance and dignity that they say their politicians lack.

The head of the royal house bestows honors and looks after the family’s properties, which include castles.

With King Michael’s passing, the Romanian royal family´s relevance will likely fade, since his children have little public standing.

Princess Margareta, his eldest daughter, remains custodian of the crown.