A former Federal Court judge will take on the role of special investigator to prosecute alleged war crimes committed by Australian special forces soldiers in Afghanistan.

Mark Weinberg, who served as a judge on the Court of Appeal of the Supreme Court of Victoria and the Federal Court of Australia, has been appointed to the role in the Office of Special Investigator. 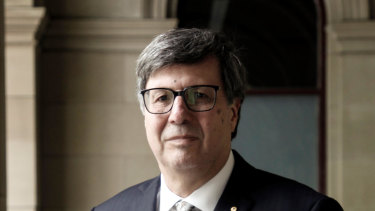 The government has also appointed the head of the Attorney-General's Department, Chris Moraitis, as director-general of the new body, while former Queensland Police deputy commissioner Ross Barnett will take up the role of director of investigations.

The Morrison government has faced difficulties in finding candidates who wanted to take on the task since the new body was announced last month. At least two individuals, who needed to be either a senior counsel or former judge, turned down the role due to its sensitive nature, according to multiple legal and government sources.

Chief of the Defence Force Angus Campbell will refer up to 36 matters to the new office, which will be assisted by experienced investigators, legal counsel and other support staff, including from the Australian Federal Police.

A four-year inquiry by NSW Court of Appeal Justice Paul Brereton, found there was credible evidence that Australian special forces committed up to 39 murders in Afghanistan, with 19 current and former soldiers facing criminal prosecutions.

The report by the Inspector-General of the Australian Defence Force, released last month, uncovered 23 incidents in which one or more non-combatants – or individuals who had been captured or injured – were unlawfully killed by Australian soldiers, or at least at their direction.

The alleged murders referred to by the Brereton report date back to 2006 but most took place in 2012 and 2013 and were allegedly committed by soldiers from the Perth-based SAS.

The Morrison government has been facing criticism for its response to the release of the report, particularly the recommendations to strip the meritorious citation for the Special Operations Task Group in Afghanistan and to disband the SAS's second squadron.

Home Affairs Minister Peter Dutton said the Office of the Special Investigator will examine the findings of Brereton inquiry and will its begin work from January 4 next year.

"The task for these eminent appointees will be challenging and as the Prime Minister has noted, difficult for Australia," Mr Dutton said. "They bring a wealth of experience to the very important work this office will do. Their combined wealth of experience will serve the office well in undertaking the significant task ahead."

Justice Weinberg is a former Commonwealth Director of Public Prosecutions who was appointed an Officer of the Order of Australia for distinguished service to the judiciary and to the law in 2017.

He will be responsible for assessing and investigating the allegations raised in the Brereton inquiry and referring briefs of evidence to the Commonwealth Director of Public Prosecutions.