"I feel like a teenager again," a girl in her mid-30s admitted to me while I waited to collect my bag after the gig. It would be safe to say most of the aging rockers at the sold-out Forum felt the same way. 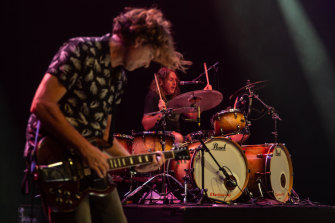 Spiderbait perform The Singles at the Forum, Melbourne.Credit:Nate Hill Photography

In the '90s, Spiderbait were a staple of Australia's live music scene. Their style has evolved slightly over the years, but they never strayed far from their signature upbeat thrash-pop-rock formula.

Fast-forward two decades and they were reminiscing the magic era of home-grown rock 'n' roll by performing "The Singles" – a one-off, two-hour showcase of their greatest hits in mostly chronological order, to an audience spanning multiple generations.

As per usual, vocal duties were shared by drummer Kram and bassist Janet English, accompanied by guitarist Damian Whitty, as Spiderbait belted out the hits.Releases from their first two albums, including Run, Monty and Jesus, set the high-energy pace.

It's hard to believe it was 23 years ago when Buy Me a Pony made it to number one on triple-j's Hottest 100. This fan favourite set fists pumping and limbs dancing, followed by the bubblegum pop-rock track Calypso, both from the solid Ivy and the Big Apples.

Their 2004 cover of Leadbelly’s Black Betty was not only the pinnacle of their career but also caused the most ruckus from the crowd. However, playing this before the two encores to follow may not have been the wisest move because people began to clear out – likely parents with children to get home to. Those who remained heard a rendition of Our Lips are Sealed (The Go-Go's), F—en Awesome, and the early Primus-influenced number Old Man Sam to close the show.

Spiderbait also perform at the Torquay Hotel on Saturday December 28 and the Grand Hotel Mornington on Sunday December 29.