A fitness trainer has been suspended after he publicly ‘fat-shamed’ a woman for buying ice cream.

The incident happened when an employee of Fitness First Singapore, named on social media as Shah Cutler, shared a photo of the unknown woman standing in front of an ice cream stand, with the caption: ‘Wtf so fat still wanna ice cream? Disgusting.’

Shah, who appears to be an influencer and award-winning body-builder was suspended by the fitness centre after he shared the Instagram story and has faced heavy criticism from his followers.

A representative for Fitness First Singapore has since taken to Facebook to say that they regret the incident and apologised for the distress caused by his comment. 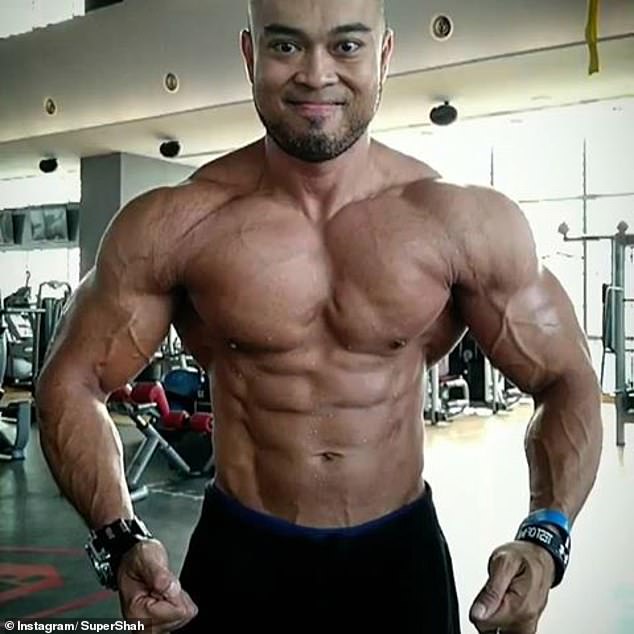 In the post shared on Monday they wrote: ‘It has been brought to our attention that a recent post by a FF trainer on social media was found to have used insensitive statements towards a member of the public and we would like to apologise for any distress caused.

‘We have undertaken an internal investigation and suspended his duties till further notice. He has since publicly apologised for his behaviour through an Instagram post and understands the insensitivity of his comment.

‘We pride ourselves on the culture of our training and the professionalism of our teams. We view this matter seriously and wish to assure the public that we do not agree with the comment made by our employee nor condone such behaviour.

‘As the fitness leaders, we strive to provide a safe, welcoming and motivating environment for anyone who wishes to pursue a healthier, fitter lifestyle, regardless of their starting point. We sincerely regret the incident.’ 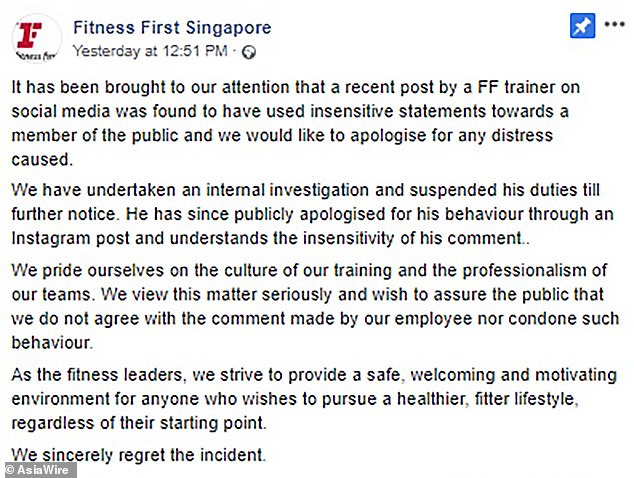 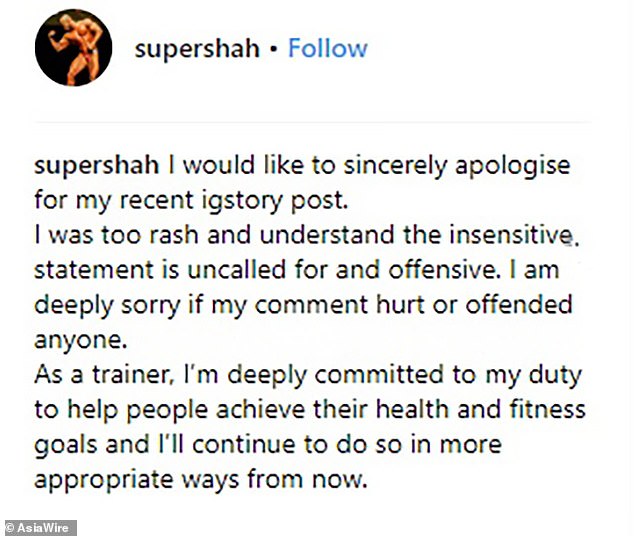 Shah has also issued his own apology on his now deleted Instagram account apologising for causing distress and promising he will continue to assist people to reach their fitness goals.

‘I was too rash and understand the insensitive statement was uncalled for and offensive. I am deeply sorry if my comment hurt or offended anyone.

‘As a trainer, I’m deeply committed to my duty to help people achieve their health and fitness goals and I’ll continue to do so in more appropriate ways from now on.’ 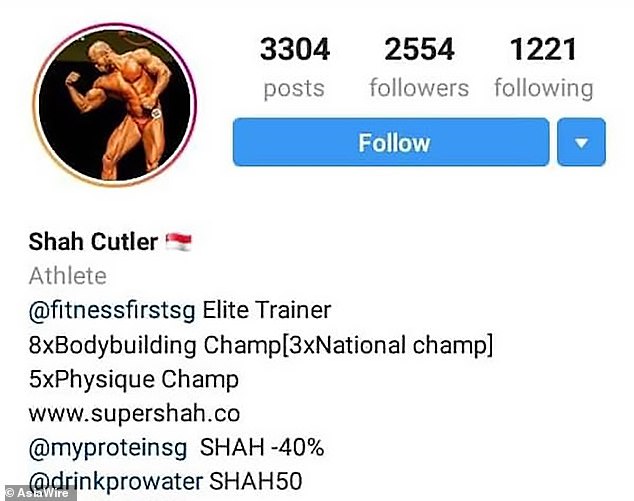 Describing himself as an ‘athlete’ Shah had previously boasted a loyal following of 2,554 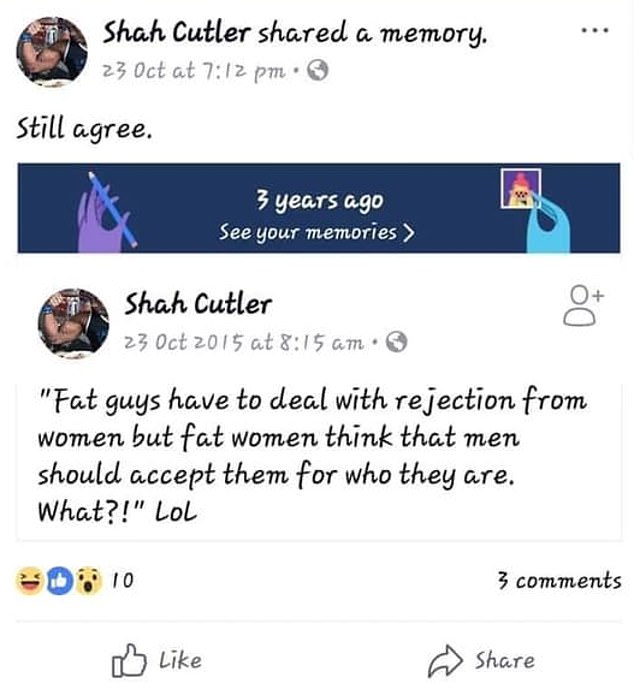 The former fitness instructor has since deleted his social media accounts.

It seems that he has not been forgiven by his followers who have shared their disparaging opinions of Shah online.

Others have shared other instances of Shah’s vile social media posts with one posting an old Facebook status from the instructor.

In the post he writes: ‘Fat guys have to deal with rejection from women but fat women think that men should accept them for who they are. What?! Lol’ adding ‘Still agree.’

The former Playboy Playmate hit the headlines in 2016 for bodyshaming a 71-year-old naked woman in the gym and sharing it online.

The 32-year-old was given 30 days community service and completed her sentence in January but only just.

Dani Mathers was given 240 hours of graffiti removal and is now on probation for three years. 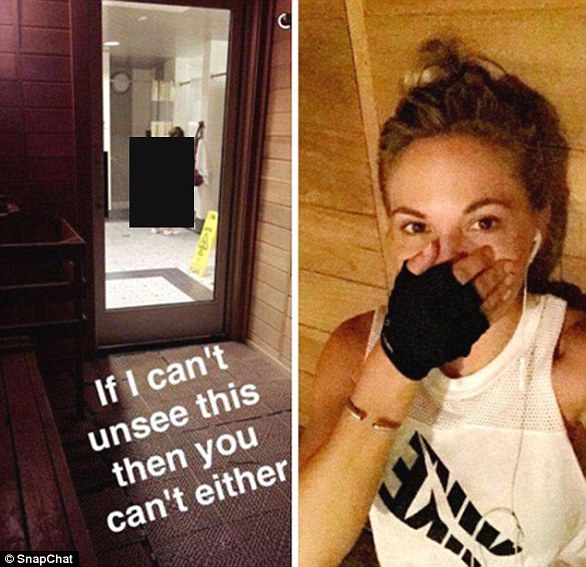 She had until January 17 2018 to complete her goal which she reached by the skin of her teeth with just hours to go before the deadline passed.

Had she failed to reach her target set by the court, she would have faced 45 days jail.

Mathers decided to take a plea deal and carry out community service instead of having to serve 45 days behind bars for the picture that she posted on her social media and proceeded to fat shame.

‘If I can’t unsee this then you can’t either,’ she said in the highly criticized picture that was posted on Snapchat in July 2016. 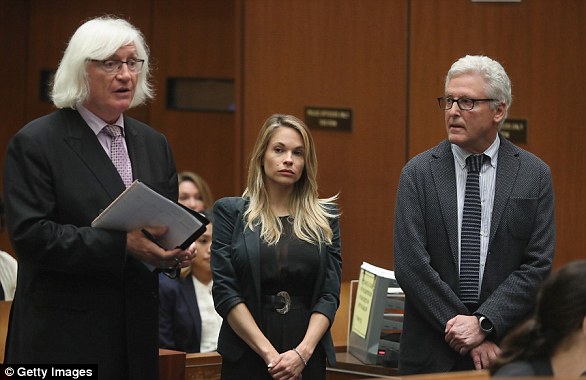 Although she didn’t admit guilt, the plea is recorded as a conviction. She had been facing a maximum of six months in jail and a $1,000 fine if convicted at trial.

Mathers said that she intended to send the photo privately to a friend and accidentally posted it publicly.

The crime was amplified by the attention the photo got online and the backlash that erupted in the world of social media.

Mathers lost modeling jobs and work as a radio host, her lawyers said. She also complained of being bullied online.

Mathers is still on probation until May 2020, but she no longer has to check in with authorities.