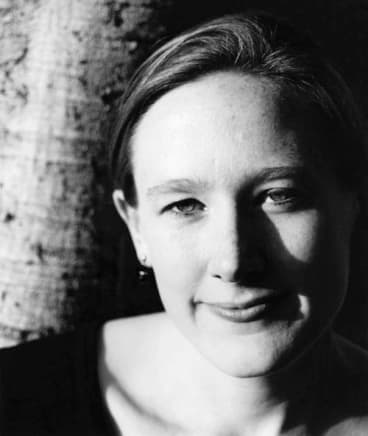 American playwright
Sarah Ruhl wrote Eurydice in the wake of her father’s death.

He is the musician whose melodies melt stones. She is his just wed, now dead love he wants to reclaim from the Underworld.

The myth of Orpheus and Eurydice has been retold so often – in film, opera and literature – but invariably it remains all about him. If only he hadn't looked back.

Playwright Sarah Ruhl has upended the myth to put the focus on Eurydice. Sort of. For by injecting the figure of Eurydice's father, the play is as much about a father's love as a woman navigating her way through the world's treacherous undercurrents.

We begin in the land of the living, on a beach, where Orpheus is into his music (of course) and Eurydice is into books. He is self-absorbed, she is sunny and open. They may not be a perfect match, but they're giddy and they wed.

Bored on her big day, Eurydice follows a sinister stranger offering a letter from her dear, dead father. Soon she too is dead, which is when things get truly weird in this fragmented, surreal piece.

She descends into the Underworld like Alice down the rabbit hole. Gone is her sunny disposition and her memory, having bathed in the river of forgetfulness. She mistakes her father for a porter and treats him with imperious disregard.

She encounters the grotesque Chorus of Stones. They bob up from beneath the stage dressed like figures from a Weimar cabaret. And what a cold, hectoring trio they are barking out their prohibitions and rules.

They are a counterpoint to the devoted father who helps Eurydice recover her memory, her language and sense of self. By now her heart belongs not to Orpheus but to daddy.

It definitely doesn't belong to the creepy King of the Underworld (Nicholas Papademetriou) who fancies his chances.

Ruhl has said that writing the piece in the wake of her father's death allowed her to have more conversations with him.

Certainly the scenes between Eurydice (a self-possessed Ebony Vagulans) and her father (played with tender conviction by Jamie Oxenbould) are the most compelling and emotionally charged.

Yet the three stones (Alex Malone, Ariadne Sgouros and Megan Wilding) and the puppets they manipulate so dominate Claudia Barrie's production they overshadow everything else.

There are ideas in there about remembering and oblivion, about grief and letting go, although with so many tangents none are fully developed.

What could have been a thoughtful ending was undercut by an upbeat musical coda with a dancing puppet. It felt gratuitous; overstuffed yet undercooked.