Meghan has done a brilliant job of paying tribute to the fashion industry Down Under while showcasing some British designers during the tour. But she has also put her own unique twist on her wardrobe by focusing on eco-friendly fashion.

Since she began her (now defunct) lifestyle blog The Tig in 2014, Meghan has campaigned for a more sustainable planet. And her green credentials have never been more evident than in her outfit choices over the past fortnight – dresses made from organic fabric, shoes of sustainable leather and jewellery crafted from recycled gold.

Fashion powerhouse Stella McCartney is one of the Duchess of Cambridge’s go-to designers. But Meghan too has a special connection to the daughter of Sir Paul McCartney: not only did Stella design Meghan’s evening wedding gown, she also shares her interest in sustainable and animal-friendly fashion. 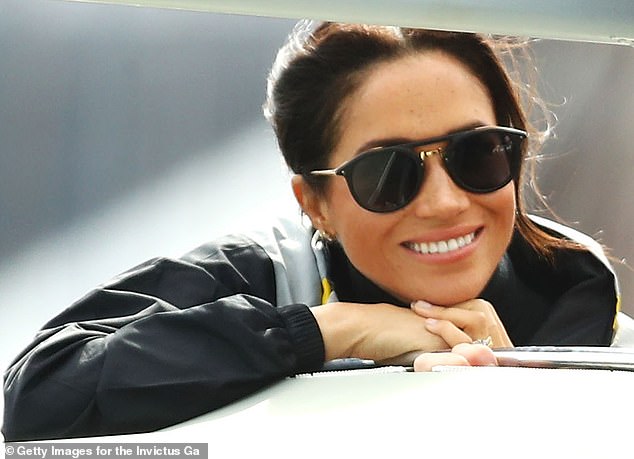 Meghan first wore Stella’s £1,150 navy cape dress for the Queen’s 92nd birthday concert at the Royal Albert Hall in April. And she re-wore it for the opening ceremony of the Invictus Games, teamed with a coat by another female designer, actress Gillian Anderson – who has created a collection for British label Winser.

For her final day in Australia, when she visited Fraser Island, Meghan wore a £166 ‘Pineapple’ maxi dress with a thigh-high split from US label Reformation, which aims to put sustainability at the heart of its business.

The company, which tracks its environmental footprint, states on its website: ‘Being naked is the number 1 most sustainable option. We’re number 2.’ 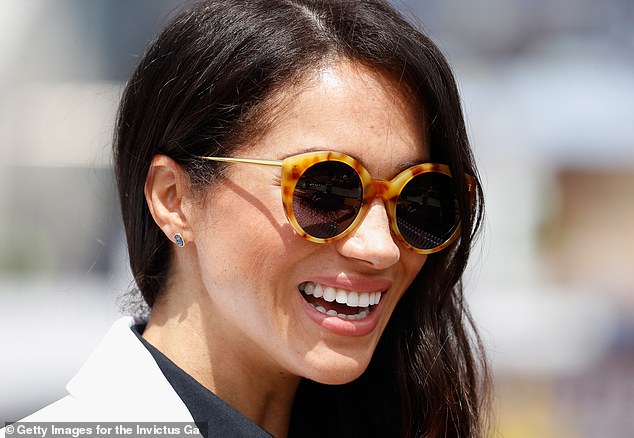 DUCHESS OF RETRO: In a pair of £255 Illesteva Palm Beach shades at Cockatoo Island

On a visit to Dubbo, in New South Wales, Meghan chose a pair of £140 Harriet jeans by the Australian brand Outland Denim, which employs Cambodian women who have been victims of sex trafficking.

She teamed the jeans with an oversized £110 Boss blazer by her close friend, tennis player Serena Williams, who was a guest at her wedding, and shares her feminist credentials.

In fact, Meghan chose a number of female designers to equip her, including Australian Karen Gee, whose website crashed after Meghan wore her cream shift on the first day of the tour – the day she announced she was pregnant. 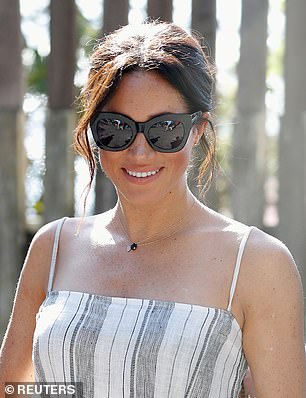 IN THE FRAME: A smiling close-up, wearing a pair of £145 Karen Walker Northern Lights

She also wore outfits by London-based designers, including Roksanda Ilincic while on a trip to a school in Sydney; New Zealander Emilia Wickstead – a £1,595 Camilla coat dress for the Anzac Memorial service – and Daniela Karnuts – a £1,095 Gingko Cape dress for a state dinner in Fiji.

But Meghan knows it is accessories that make an outfit, and was equally in tune in her choice of shoes, bags and jewellery.

Twice on the tour, she swapped her high-heeled pumps for £112 flats by San Francisco start-up Rothy’s, which makes shoes out of recycled plastic bottles, instantly doubling their online traffic.

And when she took part in a sailing competition in Sydney, she wore £115 J-10 vegan sneakers by French company Veja. The brand makes their trainers out of organic cotton, wild rubber from the Amazon and vegetable-tanned leather.

On her arrival in Fiji, she had a £173 Anna woven straw clutch by Kayu. The US company employs immigrant artisans from the Philippines, Malaysia and Indonesia to hand-craft bags from natural materials. She also bought a woven bag made by women at Fiji’s Suva market.

KEEPING COOL: Meghan wears a loose £166 ‘Pineapple’ maxi dress on her final day in Australia (left) LOCAL PRODUCE: In Fiji, Meghan ditched the designer bags for one made by women at Suva market (right)

When it comes to jewellery, one of Meghan’s favourite designers is Pippa Small, who describes herself as an ‘anthropologist, human rights activist and survival ambassador’. Meghan has a number of her rings, bracelets and studs made with Herkimer ‘diamonds’ – quartz crystals – mined from the Mohawk River valley in New York’s Herkimer County.

She has also showcased some new designs: the £115 Oshna bangle and £160 Omeen bangle worn when she and Harry left Fiji were hand-crafted in Kabul. And during the Invictus Driving Challenge on Cockatoo Island, eagle-eyed fans noticed she was wearing four rings by Canadian jeweller Ecksand, which ‘respects Mother Nature’, and uses 100 per cent recycled gold and traceable gems. 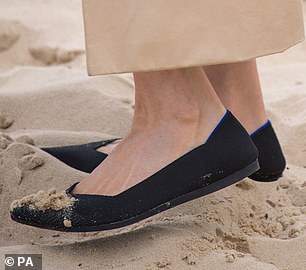 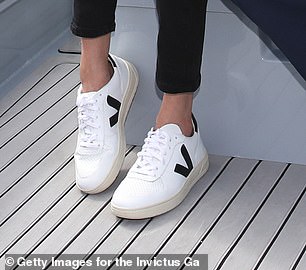 SAND FLATS: On Melbourne beach, she steps out in £112 Rothy’s, made of recycled plastic (left) GOING VEGAN: Meghan’s £115 Veja sneakers, made from organic cotton and wild Amazon rubber (right) 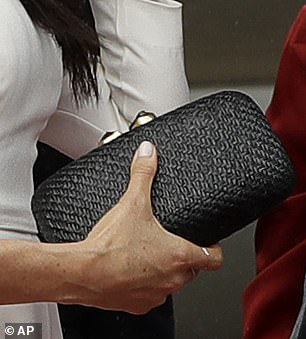 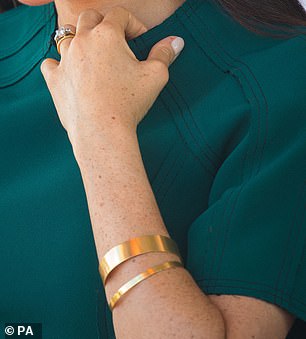