A bride has spoken of her heartbreaking decision to combine her daughter’s sixth-and-a-halfth birthday with her own wedding – because a form of juvenile dementia has stolen her little girl’s future.

Claire Bradshaw, 45, from St Helen’s, Merseyside was devastated when Kaycee was diagnosed with the incurable genetic condition, which affects everything from her mobility to her mental health – and means she is unlikely to live beyond the age of 12.

And when Claire – who celebrates Kaycee’s half birthdays because of her limited lifespan – married warehouse worker Greg Riley, 47, on October 27, she asked people to wear orange – the colours of juvenile dementia.

‘Half birthdays for terminally ill children are celebrated for obvious reasons. We never know how much time is left, so every minute is precious, ‘Claire explained.

‘We got married on her last half birthday this year and I was very happy for her to upstage me, as the wedding was designed to be a celebration for her as well as me and Greg. 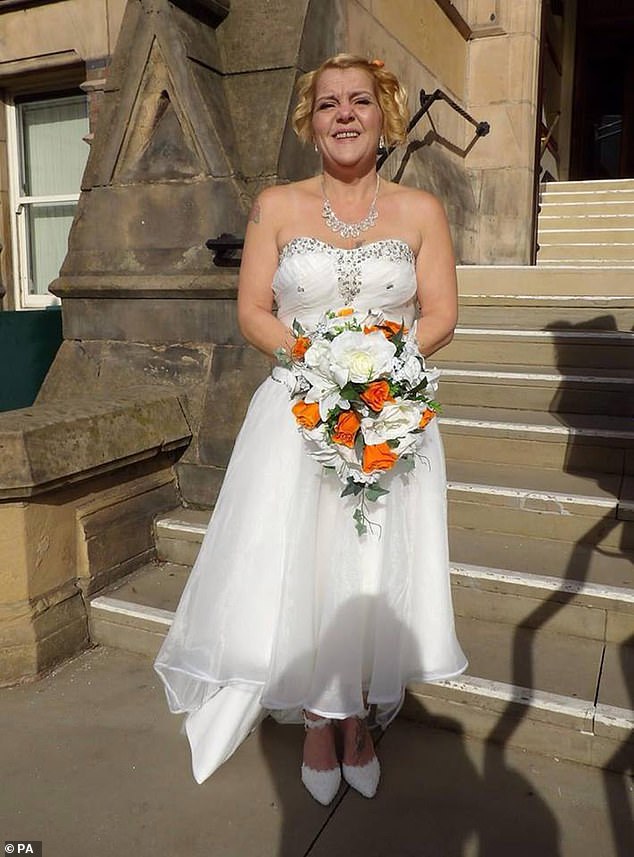 Mum-of-six Claire Bradshaw, 45, from St Helen’s, Merseyside was devastated when her daughter Kaycee was diagnosed with a rare and incurable form of childhood dementia on August 31, 2016. Now they celebrate her half birthdays, as it’s unlikely she’ll live past 12. 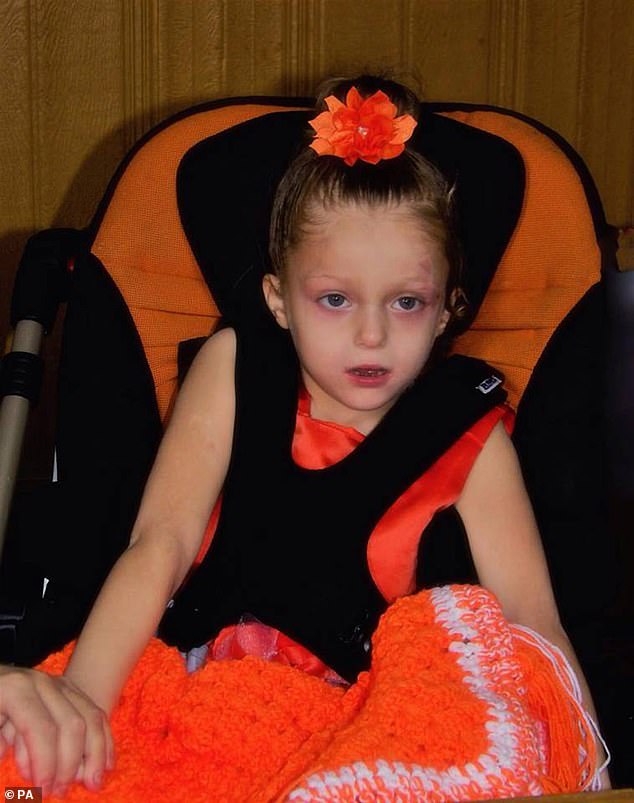 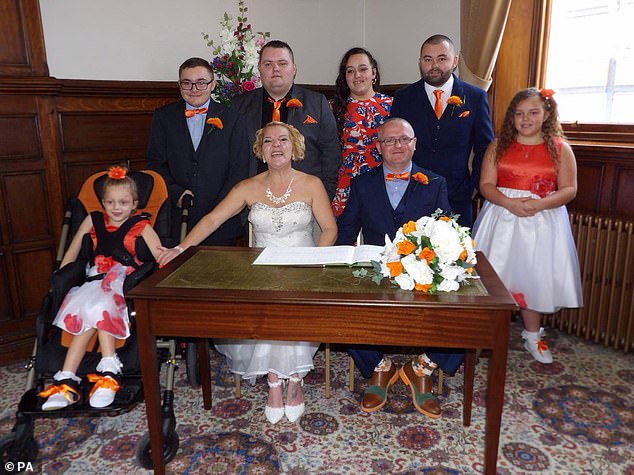 ‘Our family and friends partied well into the night after the ceremony, and even Kaycee’s favourite teacher at her special needs school attended.

‘I show her pictures and try to remind her of the big day. I’m not sure she even remembers it, but I want to at least try to keep the memory alive for as long as possible.

‘Raising awareness for Batten disease was a big part of my wedding day, too. Sometimes it swallows my life, but until we beat it, I won’t leave it alone. 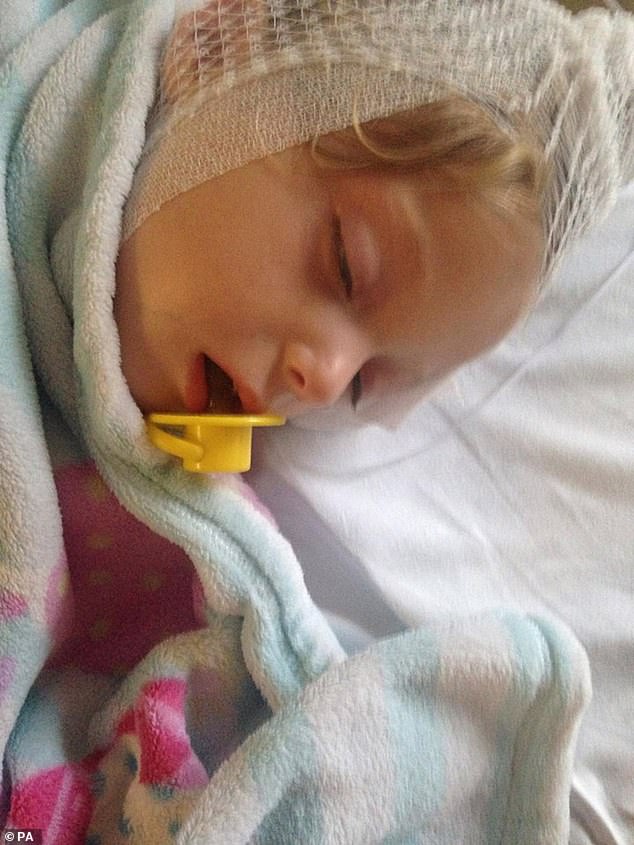 Kaycee suffers from frequent short-term memory loss, has extremely limited vocabulary and struggles to recall what she does during the day

‘Forget the honeymoon, we can just have a caravan holiday at some point!’

She said: ‘I told my guests they couldn’t come unless they wore orange. But, seeing them all there in that sea of orange, made my heart swell.

Claire – who is not in touch with Kaycee’s dad – told how her nightmare began in September 2015 when, after experiencing jerky movements or tics, her little girl was diagnosed with epilepsy – which affects the brain and causes seizures.

When Kaycee began falling to the floor for no apparent reason, she hoped it was just clumsiness. However, when this was accompanied by delayed speech, she started thinking her little girl might have the autism, and took her back to the doctor’s.

She said: ‘We visited the doctor and asked why Kaycee wasn’t developing like a normal child.

‘After that, we went through 16 months of pure hell – with countless blood tests and MRI scans to figure out what was wrong.

‘During that time, Kaycee was only getting worse. She was losing teeth, as she kept falling over and could barely walk properly.’

Then came the dreaded call, on August 31, 2016, when the family were told Kaycee had CLN2 Batten disease – meaning her life expectancy was between just eight and 12.

Claire recalled: ‘The nurse who gave the diagnosis had to Google it right in front of us, because even she didn’t know what it was. 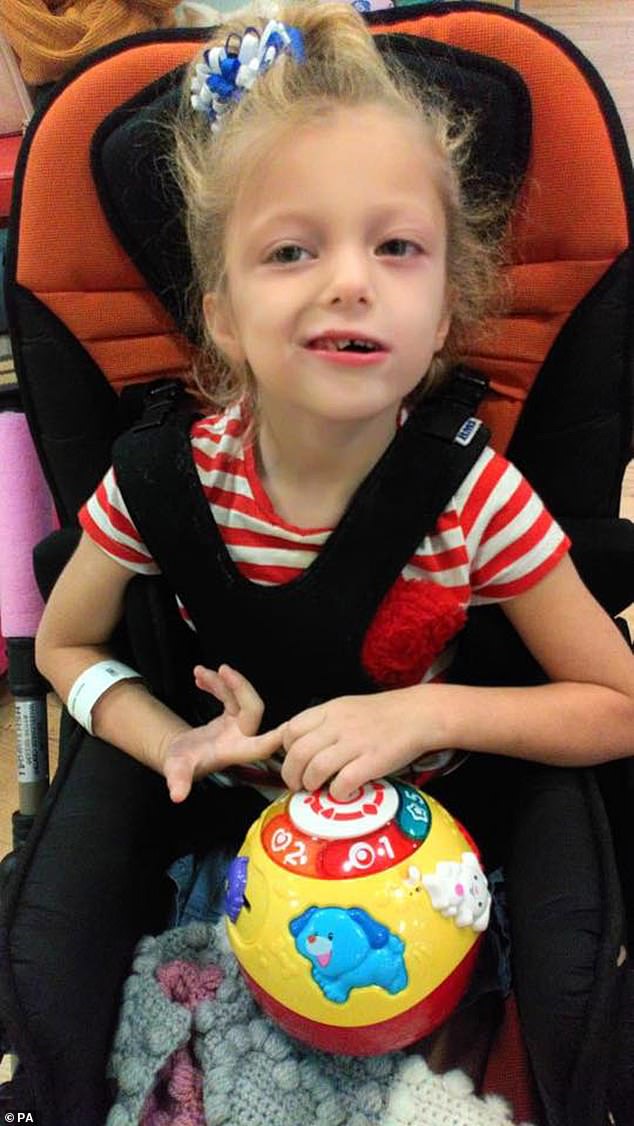 Even doctors were baffled by Kaycee’s symptoms, and had to Google a diagnosis as it was something they had never come across before

‘None of us had ever heard of it. There had never even been a known case in our area, but we were told it was terminal there and then.’

What is childhood dementia?

Between 11 and 17 children are diagnosed with the most common form of childhood dementia in the UK every year.

It is usually caused by Niemann-Pick disease type-C, Batten disease and Mucopolysaccharide diseases.

Early diagnosis is crucial as once damage occurs to the brain it is irreversible, but this can be challenging as the symptoms are often confused with other conditions such as epilepsy.

There are three forms of Niemann-Pick Disease: Type A, B and C.

Each type affects the way the body breaks down fat and is caused by a genetic mutation.

Type A, which Purnell has, rapidly affects the brain and usually causes death before the age of three.

Type B affects the liver, spleen and respiratory system and sufferers can survive into adolescence or adulthood.

Type C is the most common. Because of a faulty gene, the body doesn’t produce the enzyme needed to break down cholesterol.

It is caused by waste buildup in the cells which creates neurodegnerative effects including blindness, seizures, personality changes, dementia as well as the loss of motor skills and the ability to walk, talk and communicate

There are 14,000 children worldwide that are diagnosed with the incurable disorder.

A group of diseases ca deficiency in the body of an enzyme called iduronate sulphate sulphatase.

This enzyme is vital for breaking down long chains of sugar molecules called Mucopolysaccharides (MPS).

Without it, these molecules build up until they reach toxic levels in the body.

Sent home with an A4 sheet of information about Batten Disease, still in shock, Claire and Greg had the troubling task of telling Kaycee’s five siblings – Bryan, 27, Natasha, 25, Callum, 22, Tyler, 16, Tazim, 10 – the terrible diagnosis.

Claire recalled: ‘It was a complete nightmare, which will always be permanently etched on my brain.

‘I was greeted by screams of, “There can’t be a god – how could there be?”. It was truly heartbreaking.’

Determined not to give up, the devoted mum then spent day and night researching the condition, until she found cerliponase alfa treatment, a form of enzyme replacement therapy administered directly into the brain which, while not a cure, can slow down the progression of the condition.

But, costing around £500,000 annually per patient, she discovered it was very rarely available in the UK.

She said: ‘I got a phone call from the BDFA – Batten Disease Family Association – charity telling us we could have the treatment free – if we got in quick enough.

‘There were only five funded places – as there still are – in the UK and three were taken, so we went straight to London’s Great Ormond Street Hospital to get it.’

Since then, Kaycee and Claire have visited the hospital every fortnight for two years, for the treatment – funded by the National Institute for Health and Care Excellence (NICE) – travelling for over four hours each way.

Claire continued: ‘The treatment involves a needle infusion straight into the brain, which takes four hours to drive through a syringe. It can’t cure Kaycee, but it does slow down the effects.

‘She’s usually awake for the whole four hours, so I have to stay by her side and watch movies with her, to make sure she doesn’t fidget and move anything she shouldn’t.’

One of the most agonising aspects of Batten Disease, according to Claire is that, while it can be similar to caring for an elderly person with the same condition, all her daughter wants to do is run around and play with other children.

Claire explained: ‘She has frequent short-term memory loss and can barely recall what she does during the day.

‘Her vocabulary is extremely limited. She can say, “mum” and various grunts and groans, which only her family can interpret. Often she wears nappies and drools – at her worst times, she’s a mess.’

Taking Kaycee to play areas is a great challenge for Claire, who finds watching her stumble and barely stand up to play with other children heartbreaking, while her daughter ends up screaming in frustration at her limitations. 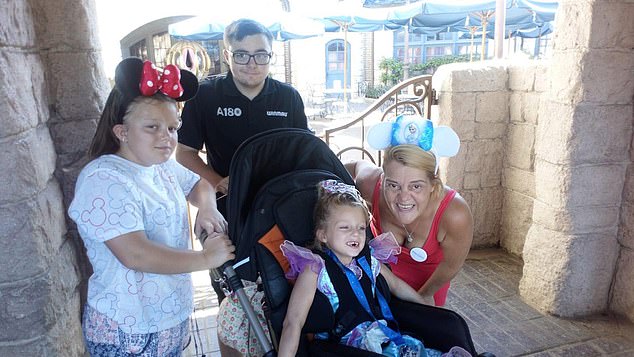 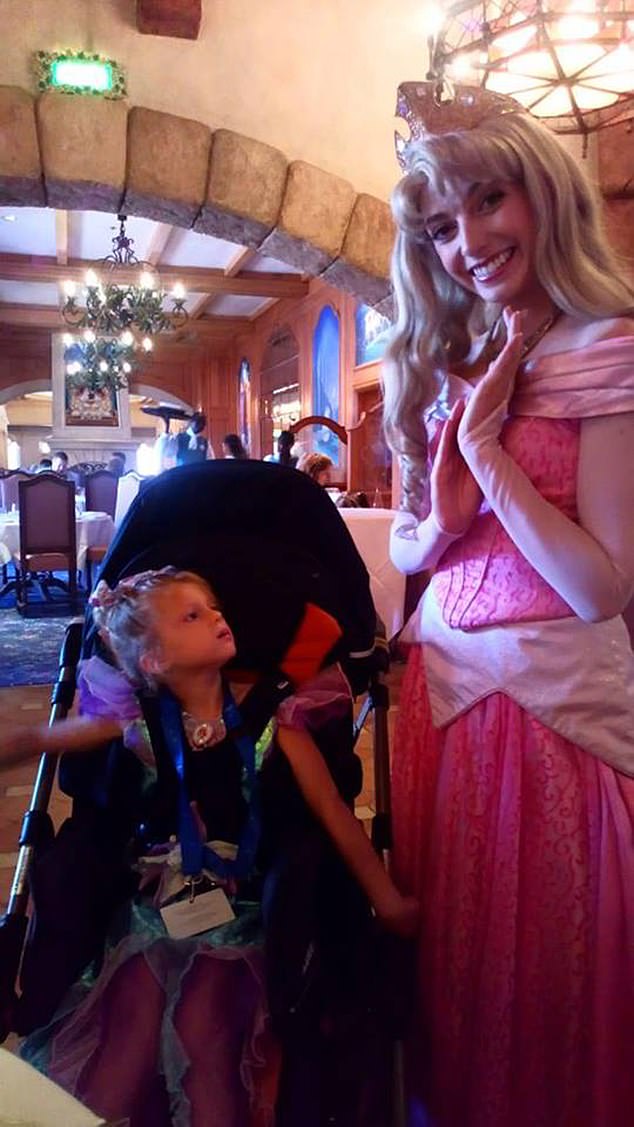 One princess meets another: Despite the difficulties, Kaycee has a great quality of life, but Claire says she ‘would never want to prolong her suffering or pain’ if she started to deteriorate rapidly

Conversations with Kaycee can also be extremely painful, with Claire frequently having to leave the room to cry in private, as she cannot understand what her little girl is trying to tell her, or why she is distressed.

Despite the difficulties, however, she still believes that Kaycee has a great quality of life, but would never want to prolong her suffering or pain, if she started to deteriorate rapidly.

She said: ‘I’m constantly aware that more bad turns could be around the corner.

‘Eventually, Kaycee will need tubes to assist in feeding her, but right now she still laughs and giggles like any other child.’ 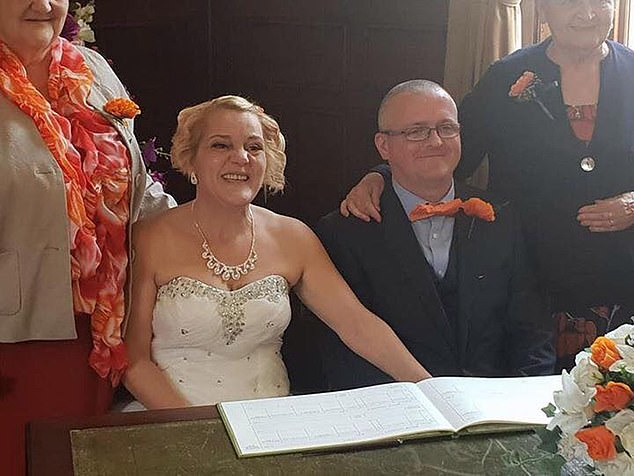 Although they face many obstacles, the family have still enjoyed fun times – such as a trip to Disneyland Paris for two nights, provided by the charity, Make A Wish, in August 2018. 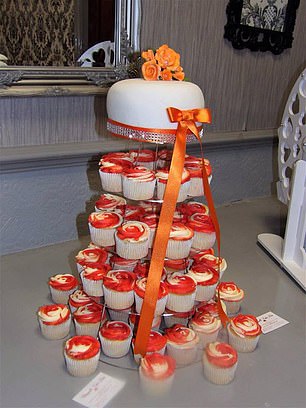 Claire said that ‘raising awareness for Battem disease was a big part of the day.’ This was reflected in the orange-and-white theme – the colours of the juvenile condition

One of Claire’s proudest moments was getting the news that Kaycee is included in the final three for the Child of Courage awards on November 16th.

Now the wedding is over, the couple are back to normal life in their three bedroom council house, where Claire has to constantly carry Kaycee up and the down the stairs and two family members have to watch her in the bath for safety.

But, despite everything, Claire refuses to accept that losing the daughter she so loves is inevitable, saying: ‘Every time I go to bed at night she sleeps with me, that’s my way of keeping her safe.

‘I want her to see me every morning and night. I stroke her eyelashes and fingers and make sure she falls asleep. When I say goodnight, I think, ‘Is this the last time I’m going to say this?’.

‘People’s wishes and desires in life change all the time. Mine are always the same – to keep Kaycee with me. I want her to be here when there’s a cure, that’s the bottom line.’