David J. Thouless, who shared the 2016 Nobel Prize in Physics for discoveries that used mathematics to explain strange states of matter like superconductivity and superfluidity, died on April 6 in Cambridge, England. He was 84.

The University of Cambridge announced his death but did not provide a cause. Born in Scotland to English parents, Dr. Thouless had taught at Cambridge but received his Nobel while affiliated with the University of Washington.

Dr. Thouless’s research dealt with condensed-matter physics, and specifically with what happens when matter changes phases — as, for example, when ice melts and becomes a liquid or water boils and becomes steam.

Though phase transitions seem deceptively simple, the mathematics turn out to be exceedingly complex, and important — particularly when one looks at such a transition at the microscopic level using quantum mechanics.

Dr. Thouless’s research has real and potential applications to the development and refinement of a wide range of electronic devices, semiconductors and even quantum computers, which might one day use the properties of fundamental particles, like spin, to perform powerful and incredibly fast calculations.

It was in the 1970s, while working at the University of Birmingham in England, that Dr. Thouless became interested in whether phase transitions could occur in super-thin, basically two-dimensional materials and turn them into superconductors — that is, materials through which an electrical current could pass with no resistance.

Many scientists thought such transitions were impossible, reasoning that random thermal fluctuations would prevent the proper order of atoms and molecules that is necessary for superconductivity or superfluidity to occur.

Dr. Thouless received half of the 2016 Nobel Prize in Physics. He shared it with two British-born scientists: J. Michael Kosterlitz, who was affiliated with Brown University, and F. Duncan M. Haldane, from Princeton University.

Dr. Thouless and Dr. Kosterlitz, working together, attacked the problem of phase transitions using topology, a branch of mathematics that focuses on the fundamental shapes of things, looking at what properties of an object are preserved when it is changed or deformed. (Topological surfaces are partly defined by how many holes they have. A doughnut and a coffee cup are considered to be similar because each has one hole.)

Much to the surprise of the scientific world, Dr. Thouless and Dr. Kosterlitz theorized mathematically that at very low temperatures, some two-dimensional materials are composed of systems of clockwise and counterclockwise spinning vortexes, corresponding to positive and negative charges — and that at such low temperatures these systems align to permit superconductivity or superfluidity to occur.

But, they concluded, if the temperature of the material rises, causing a phase change, the vortexes split apart, robbing the material of its “super” powers. This phase shift came to be known as the Kosterlitz-Thouless transition. 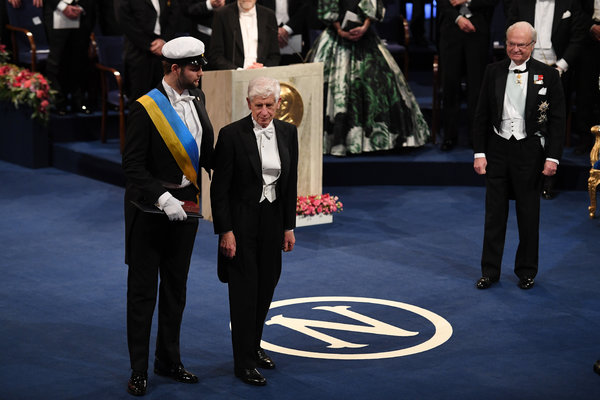 At the time of the Nobel committee’s announcement in 2016, Michael S. Turner, a physicist at the University of Chicago, described the work of Dr. Thouless and the others as “truly transformational, with long-term consequences both practical and fundamental.”

In 1982, Dr. Thouless brought topology to bear on another problem: the quantum Hall effect.

The Hall effect is named for the American physicist Edwin Hall, who in 1879 discovered that when a magnetic field is positioned at a right angle and close to a conductive material through which a current is passing, it creates a voltage difference in the material. (The simple reason is that the magnetic field either attracts or repels the electrons in the current, creating a small electrical potential difference in the material.)

In 1980 a German physicist, Klaus von Klitzing, while repeating Hall’s experiment — but using a thin film cooled to almost absolute zero — found that changes in the conductance, or electrical resistance, of the material, as a function of the magnetic field applied to it, varied in steps, like those of a staircase.

It turned out that it did not matter if the material had many imperfections, thus ensuring that the experiment could be repeated with other flawed materials. That was significant, because it made industrial applications of the discovery much easier.

For his discovery, Dr. Klitzing was awarded the Nobel Prize in 1985.

Theoreticians wanted to explain Dr. Klitzing’s discovery mathematically, so Dr. Thouless, working with three research assistants, applied topology to the problem. This led to a landmark paper in 1982 that linked Dr. Klitzing’s discovery to the so-called Chern numbers — named after the mathematician Shiing-Shen Chern — which are used to characterize topological shapes.

It was for this mathematical insight, as well as his earlier work with Dr. Kosterlitz, that Dr. Thouless received half the Nobel Prize.

David James Thouless was born on Sept. 21, 1934, in Bearsden, Scotland, to Robert and Priscilla (Gorton) Thouless, both of whom were originally from England. (He said his surname was a variation on Thewless and Thewlis.) His mother taught English in Manchester, England, before she gave birth to Dr. Thouless’s oldest sister, Susan, in 1925. Dr. Thouless’s father was a psychology professor at the University of Glasgow and familiar to radio audiences for his programs on thinking critically. He drew on those programs to write the book “Straight and Crooked Thinking” (published in the United States as “How to Think Straight”), which became required reading for students of rhetoric.

Dr. Thouless pursued his undergraduate education at the University of Cambridge before earning his Ph.D. at Cornell University. He studied there under Hans Bethe, who received the Nobel Prize in Physics in 1967.

While at Cornell, Dr. Thouless met and married Margaret Scrase. His wife, who is now a professor emeritus of pathobiology at the University of Washington, survives him. His survivors also include their three children, Michael, Christopher and Helen.

After graduating from Cornell in 1958, Dr. Thouless spent a year at the Lawrence Berkeley National Laboratory in California before joining the department of mathematical physics at the University of Birmingham, where he worked under Rudolf Peierls, another world-renowned physicist.

Dr. Thouless remained at Birmingham until 1978. He then taught at Yale University for two years before the appointment at the University of Washington, in Seattle, where he worked until 2014. He then returned to Cambridge.

Dr. Thouless was awarded the prestigious Wolf Prize in physics and the Dirac Medal, named for Paul Dirac, one of the fathers of quantum physics, in 1993.