With Monday marking the official halfway point on this season’s “Dancing With the Stars,” the competitors battled it out on the dance floor in a desperate attempt to stay in the Mirror Ball Trophy race. The night was an emotional roller coaster, bringing the audience to their feet at times and, at others, to tears.

The most shocking moment of the night was when Ally Brooke and Sailor Brinkley-Cook were told they’re going home. The judges, along with members of the audience, loudly decried the results. However, with only one save to give, the judges sorrowfully spared Brooke, causing Brinkley-Cook’s promising “DWTS” career to come to a screeching halt. 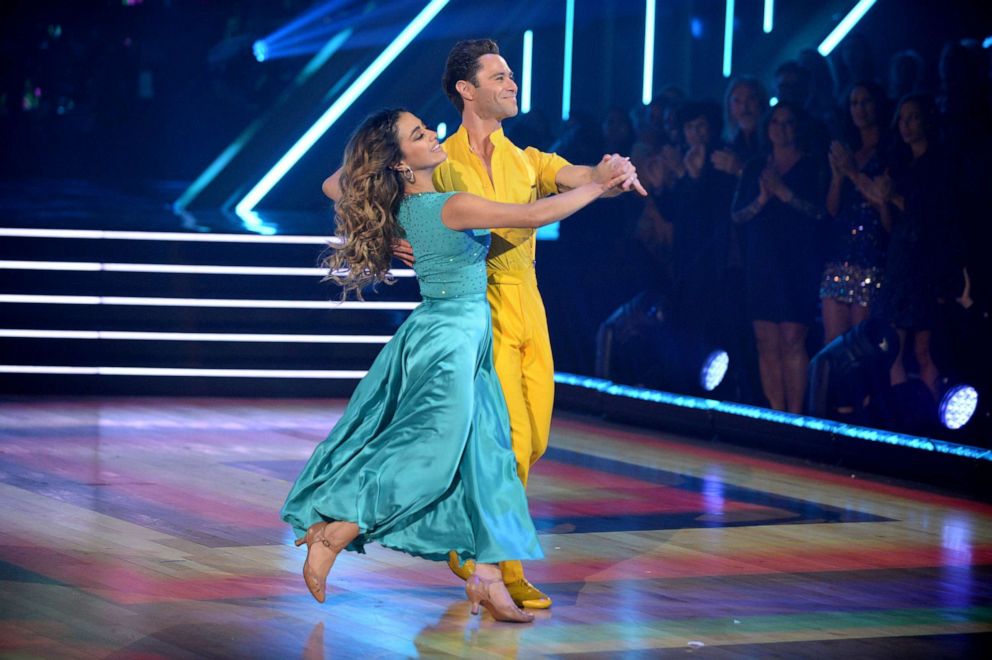 Brinkley-Cook’s animated jive to WHAM’s “Wake Me Up Before You Go-Go,” which earned her rave reviews from judge Bruno Tonioli, failed to impress the audience. Despite celebrating an impressive final combined 51/60 after winning her first straight nines of the season, she was sent home at the end of the night.

“I’m trying not to cry … but it’s been such an incredible experience,” she said.

“This is just the beginning,” her partner Val Chmerkovskiy said while consoling her. “It hurts and it should hurt … but life goes on and I’m excited to see what she’ll do next.”

“And she’s gonna have her own story one day. And this is all gonna be a part of it,” he added.

The young model was a last-minute addition to the show, stepping in after her mother, Christie Brinkley, broke her wrist during rehearsals and could no longer compete.

“I just wanna say thank you to everyone who supported me because I know I’m not a big star,” she said during her goodbye. “I was scared every single Sunday of every week … and they always made me feel like I could do this. I’m just gonna miss them and I’m gonna miss this.”

James Van Der Beek, who kicked off the season by establishing himself as the one to beat, reclaimed his crown with his colorful and smooth samba to Major Lazer and Diplo’s “Light it Up.” After suffering a series of point deductions over the past few weeks for his hip work, the “Dawson’s Creek” star shook his hips with everything he had, earning him one of the best comments of the night.

Judge Len Goodman, with wide eyes, marveled, “Tutti fruity, look at that booty!” The judges gave Van Der Beek’s shaking hips straight nines for a score of 27/30. Combined with last week’s totals, he shot to the top of the leader board with a total of 53/60.

Two other competitors of the night enjoyed straight nines — Brinkley-Cook and Kate Flannery.

Flannery, who struggled to dance passionately to an Argentine Tango two weeks ago, turned up the heat with partner Pasha Pashkov. She treated the audience to a series of graceful spins across the dance floor before revealing at the end that she suffers from vertigo. Her dedication paid off, earning her a 27/30 for the night and a combined total of 51/60.

There were two standout performances on Monday from Karamo and Lauren Alaina, both of whom dedicated their emotionally charged performances to their father figures.

Karamo danced an intense and emotional contemporary with partner Jenna Johnson to Lewis Capaldi’s “Someone You Loved.” He dedicated the night’s dance to his father, who disowned him when he was a teenager for being gay. Their story has a happy ending, with his father eventually reaching out and repairing their broken relationship — even sitting proudly in the audience on Monday. Karamo performed an intricate floor routine with plenty of lifts that wowed the judges, who happily handed him his highest score — 25/30.

The saddest moment of the night, if not the entire season’s, came from Alaina. She revealed that the first anniversary of her stepfather’s death was fast approaching and she struggled through tears as she performed a raw and heartbreaking contemporary to her single “The Other Side,” a song she wrote in honor of her step father, Sam. The country singer openly wept as the judges praised her bravery and vulnerability, earning a 26/30 for the night and a combined 49/60.

Former White House press secretary Sean Spicer, on the other hand, was unable to elevate himself from the bottom of the pack. Spicer was forced out of his comfort zone with his Viennese Waltz and sometimes robotically led partner Lindsay Arnold around the dance floor, earning a 21/30 for the night.

“Dancing With the Stars” returns next Monday, Oct. 28, at 8 p.m. ET on ABC with a Halloween Night sp-ecial, featuring group dances and other spooky surprises.