Driving into the small town of Wenatchee, Washington, about three hours east of Seattle, a sign welcomes you to the “Apple Capital of the World.” But not far from the abundant orchards, a very different industry is taking root. As unlikely as it may seem, this rural community has become a hub for cryptocurrency mining.

“Cryptocurrency justified the expense to build something that no one would otherwise build,” said entrepreneur David Carlson, as rows upon rows of computer servers whirred away at the facility he set up here. “These things can run 24/7 making cryptocurrency.”

He has big plans for his business, even if some Wenatchee residents don’t like it.

“We want to grow ten times larger than we are now, and we can do it here, or we can do it somewhere, but we’re going to do it,” Carlson said.

Bitcoin is the best known, but it’s just one of many digital forms of currency. These cryptocurrencies are decentralized; rather than being processed through banks, transactions are verified and recorded by individual users. Encrypted technology called blockchain keeps the transactions secure.

Bitcoin hit a high of over $19,700 in December 2017, though it’s worth much less, about $6,300, today. Despite the volatility, rising values have fueled a whole new industry and legions of enthusiasts. At a recent cryptocurrency conference in Atlantic City, thousands gathered to explore new ideas and opportunities in the field.

“So I live off of bitcoin,” said Kenn Bosak, who hosts “Pure Blockchain Wealth” on YouTube. “It pays my rent. I book my flights with cheapair.com. They accept bitcoin, Dash, all kinds of cryptocurrencies. I book my rooms with BitPay with my Visa card. My Lyft drivers accepts BitPay, that’s bitcoin. So I’m all in. I use bitcoin in every aspect of my life.”

Unlike dollars or other conventional currencies, cryptocurrency like bitcoin isn’t issued by a government. It’s created through a process called mining, which is leading to a virtual gold rush around the world.

How does mining work?

Every time someone uses cryptocurrency to pay for something, it sets off a flurry of invisible activity. Computer servers, which can be located anywhere in the world, work to verify and process the transaction, racing to authenticate the exchange of digital money through complex transactions.

For doing this work, the machines (and their owners) are rewarded with new cryptocurrency. With a sufficient number of powerful computers, it can be a lucrative business.

That’s what David Carlson’s company, Giga Watt, is busy doing at his facility in Wenatchee. He started with just a few small machines, but with the help of investors, he’s scaled up significantly. Now his rooms full of computer servers work feverishly to mine cryptocurrency around the clock. 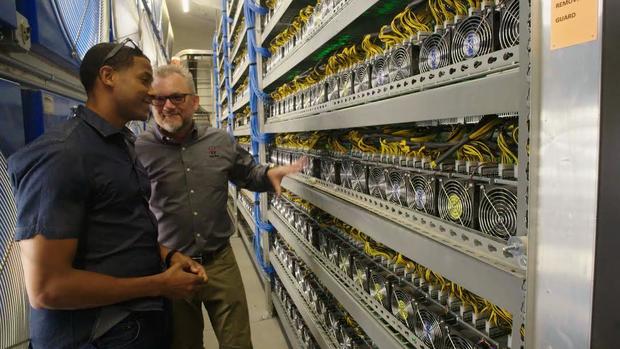 Each of the small machines makes roughly $1,500 worth of bitcoin every year, though the amount of profit fluctuates every day. As Carlson showed CBS News correspondent Errol Barnett around, the site hummed with the sound of giant industrial cooling fans.

“Every one of these things is like a thousand-watt hair dryer. So there will be a thousand of those hairdryers in this spot. So that’s quite a lot of heat. Don’t try it at home,” Carlson said.

“This entire wall is the future, according to you,” Barnett said.

He plans to have 22 of his pods completed by the end of the year — and all that computer power sucks up a huge amount of electricity.

“Our pods use one and a half megawatts, which is typically associated with, like, 600 homes,” he said.

Powering his operation would cost a fortune most places, but Wenatchee has a competitive advantage: the Columbia River. Dams on the river generate cheap hydroelectric power, which has drawn crypto mining enthusiasts to this corner of the country.

Steve Wright, the general manager of the Chelan County public utility, says it has long been an economic engine for the region. “What we have seen more recently are industries like cryptocurrency that have come to the region for the same reasons that aluminum came here. Low-cost, reliable electricity,” he said. 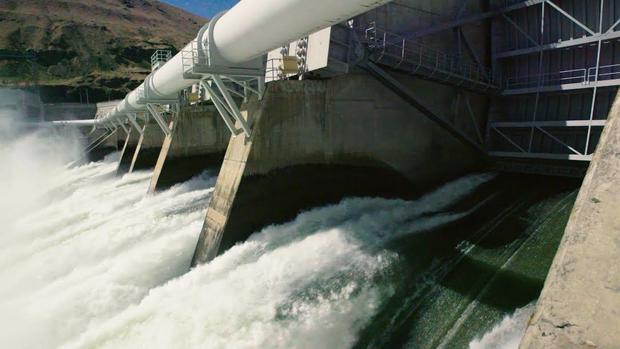 Dams on the Columbia River provide cheap power to the Pacific Northwest.

But even here, there are limits.

“We have requests for service that would double the usage here in the county, and we’re trying to figure out, you know, how are we going to deal with that, and what the implications would be for the people who live here,” Wright said.

The race for cheap power

Because access to cheap power is key, crypto miners are racing to set up shop anywhere in the world they can find low rates. Cold climates are also preferred, to help reduce cooling costs.

But this tech boom is not without problems. Among the issues: the droning noise of all that equipment. The hum reverberates far beyond the walls. And some of the operations have sprung up in a decidedly makeshift fashion.

“Would you want to live next to one of these?” said Andrew Wendell, customer service director for the utility. “Not just the aesthetics, but also the noise. There’s a lot of noise. They really do belong in an industrial setting.”

He continues, “And it gives us a bit of a concern, because, quite literally, you could have a tractor trailer come in and load this thing up and move it out, literally overnight. And so it just begs the question, from a utility who is providing and building the infrastructure to support these, how long is our investment? When we build those, we are building for 40, 50, 60 years. This doesn’t look like that long term.”

Not only is he worried about miners abandoning Wenatchee and leaving behind expensive new power connections — there are also safety concerns. Some mining setups push the infrastructure to the breaking point. 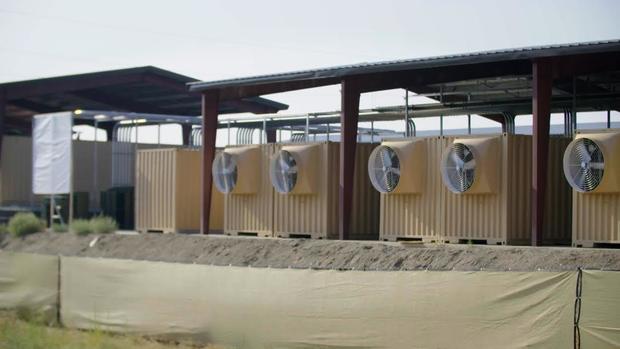 Industrial fans are needed to cool the rows of supercomputers that mine for cryptocurrency.

Wendell shows us an example. “What we have here is a standard residential home, but this shed, about 10 by 10 here, off to the side with the fence, that’s full of cryptocurrency mining operations.”

He holds up the remnants of a frayed and melted underground electrical cable.

“This plastic insulation breaks down because there’s so much heat?” Barnett asks.

“There’s so much heat. It can’t dissipate the heat. So the insulation breaks down, and then the cables go phase to phase. And when they go phase to phase, they combust. They arc and they can start a fire. And that’s what happened [here], is a fire started,” Wendell said. “The bottom line is, is that when you mix the cryptocurrency mining with traditional residential load, if you don’t have things built and designed appropriately, you’re going to have some problems.”

He adds, “In this part of the country, a wildfire can spread and burn literally hundreds of homes. So we take that very seriously.”

While some in Wenatchee are excited about the economic potential of cryptocurrency mining, many others are concerned about its massive power consumption and other risks.

“Nobody wants a fire, you know, like their apartment complex burning down, because someone is mining bitcoin,” one resident said.

Some admit they don’t fully understand it. “It’s just going to drain our power, and that’s really all I know,” a local woman told us.

Facing overwhelming demand for power from cryptocurrency miners and increasing concern from the community, the utility placed a moratorium on new mining requests until they could agree on a solution. Local miners were not happy.

“They went overboard with their moratorium. It was kinda crazy for ’em to say, ‘No, you can’t do that. We’re – we’re shutting everything down in the – in the entire county,'” said Matt McColm. He was planning to set up a mining operation in his insurance office to generate some extra money for his 12-year-old son’s college fund. He’d already ordered the equipment on Amazon. But now he’ll have to move it all to a site a few hours away in Oregon instead.

“What you’ve got is – is you’ve got is several large players that kind of salted the earth for everyone else. They’re literally consuming large sections of our town and edging out the small ones,” McColm said. “It’s kinda rough, because I’d rather develop here locally… and put the money here in Wenatchee.”

Earlier this month, the utility held a public hearing for input on the moratorium and the future of cryptocurrency mining in Wenatchee.

Some locals stood up to voice complaints about what the industry is doing to their town. “I read a lot about what bitcoin operators want, and what bitcoin is doing for them. I’m not hearing that it’s doing anything much for us. This is a take, take, take, not a give,” one woman said.

Others made the case to encourage business development, like the man who said, “I’d ask you guys to consider the very small operations that are existing right here in town. A large rate increase would drastically affect our business, putting some of us out.”

Crypto mining is just the beginning

Much of the concern about cryptocurrency mining is its volatility. With prices soaring one day and crashing the next, many worry the entire market could collapse. But advocates say they are missing the big picture — a growing industry that’s about more than just mining.

“And so it helps you to understand why in the world would you build a 30, 40-year asset for something that’s only nine years old? I didn’t. I built it for a new technology that will have many current and future iterations that we don’t yet fully understand,” he said.

He believes his investment will pay off, even if cryptocurrency fizzles.

“The demand internationally for power and networking for computing space is rising so rapidly that I’m very comfortable there will be demand for our location, even if crypto doesn’t become the market it could.”

Salcido, a Wenatchee native, wants to see his hometown benefit from the new industry. But for now, he must expand elsewhere.

“Our strategic goal is 500 megawatts within the next 5 years, and 5 to 10 percent of the global network. We are currently negotiating developments in northern Idaho, northern Oregon, and northern central California. Our choice is whether or not they happen here,” he said.

A moratorium may stem the flood of miners arriving in Wenatchee, but it won’t stop them from seeking out cheap power wherever they can find it.

In June, a cryptocurrency mining company called Coinmint took over a massive former Alcoa aluminum plant near the small town of Massena, in upstate New York. Coinmint is investing $700 million to turn it into a bitcoin mining behemoth. Once complete, it could be the largest in the world. 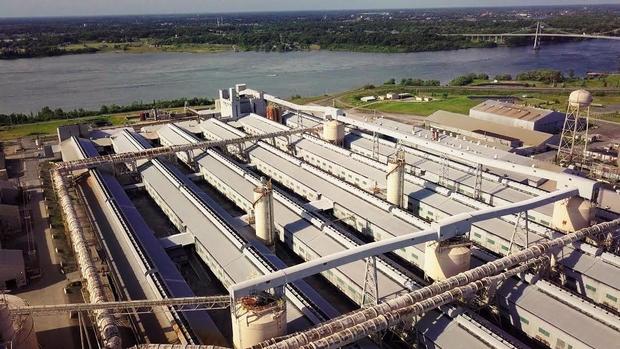 Aerial view of a former Alcoa aluminum plant near Massena, in update New York, which is being turned into a massive bitcoin mining facility.

Back in Wenatchee, the only question for Dave Carlson is not whether to grow, but where.

“Cryptocurrency justified the expense to build something that no one would otherwise build,” he said. “Supercomputing, A.I. can be the new export.”

“So you’re confident that you will grow, you’re just concerned that it will be elsewhere because Wenatchee blinked at a critical moment?” Barnett asked.