Social media users are rolling with laughter after a college student was assigned an essay on the classic American novel The Great Gatsby — and instead wrote an essay on the cartoon Tom & Jerry.

New York-based Twitter user Alexis Pereira, 35, shared a photo of the essay on Monday, writing: ‘Teaching my first English course this semester has been rewarding but I don’t know what to do with this student.’

The attached essay is titled ‘What Exactly Does Tom Want with Jerry?’ and discusses the famous Looney Tunes characters — but an irate note scribbled in red at the top grades the paper with a ‘D’ and says that it was supposed to be about Tom Buchanan from F. Scott Fitzgerald’s most famous book.

Funny: Alexis Pereira shared the photo, writing: ‘Teaching my first English course this semester has been rewarding but I don’t know what to do with this student’

Pereira shared just the top of the essay, for a 100-level English class, with the name obscured

It reads: ‘In the Looney Tunes cinematic universe, many of the cartoon nemeses have a very clear goal. Wild Coyote wants to eat Roadrunner. Pepe Le Pue wants to impregnate Penelope. Elmer Fudd wants to shoot Bugs (and who doesn’t?).

‘But it’s unclear what if anything Tom wants to do with Jerry. Submitted for the approval of English 101, I propose that Tom actually has no interest in anything with Jerry, but instead fulfilling his class role as “house cat.”‘

Only the first sentence of the second paragraph is visible: ‘Heathcliff, Top Cat, Garfield, Sylvester — these are all famous cats, most of them cartoon.’

Pereira has marked up the essay with a teacher’s red pen, pointing out the the characters he names are actually ‘Wile E. Coyote’ and ‘Pepe Le Pew.’

He added other corrections as well.

But at the top, he pointed out: ‘This was supposed to be about Tom from The Great Gatsby! The book we are reading!’ 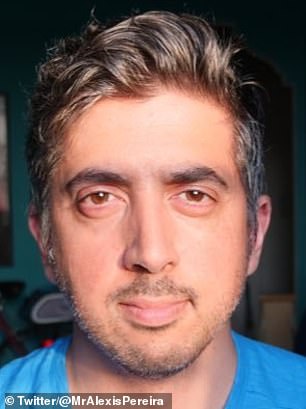 Jokester: Alexis, who shared the essay, is a comedian, not a professor

The funny photo has quickly gone viral, and in a day it had racked up nearly three quarters of a million likes.

Most commenters found it incredibly amusing.

‘I don’t believe this is real because this paper deserved at least a B+,’ quipped one.

‘Hi Alexis, I’m gonna need to see this entire essay, for journalism,’ said another, while a third wrote: ‘I’m so sorry but we need the rest of the essay.’

Some, however, were angry, and lectured Pereira that posting the essay was ‘unethical’ and in invasion of the student’s privacy.

Others pointed out that Pereira isn’t a professor at all, but a comedian, and the essay is a fake, shared for the express purpose of getting a laugh — and those who got upset should have realized that.

Finally, a few only took issue with the fact that Tom & Jerry aren’t Looney Tunes at all, but Hanna Barbera cartoons.