Furry naughty! Cocker Spaniel who spilled blue paint all over his owner’s cream carpet wins contest to find the UK’s most destructive pet

All pet lovers know their furry friends can be naughty at times, but these cats and canines have left their owners despairing by wreaking havoc on their homes.

Samuel, from Sittingbourne, Kent, managed to beat a pot-smashing tortoise called Timothy and plenty of furniture chewing dogs, to take home the winning title in a competition run by furniture company ScS, to find the UK’s ten most destructive pets.

The three-year-old Cocker Spaniel knocked a can of blue paint down the stairs and all over owner Zara Angelova’s cream carpet.

A hilarious photo of the pup shows him looking very sorry for himself as he showcases his ‘artistic skills’ on the cream carpet.

Zara said: ‘I’d just finished painting an old chest of drawers and foolishly left the open pot at the top of the stairs because I heard my phone ringing. Samuel followed me down the stairs and, in doing so, knocked over the pot. 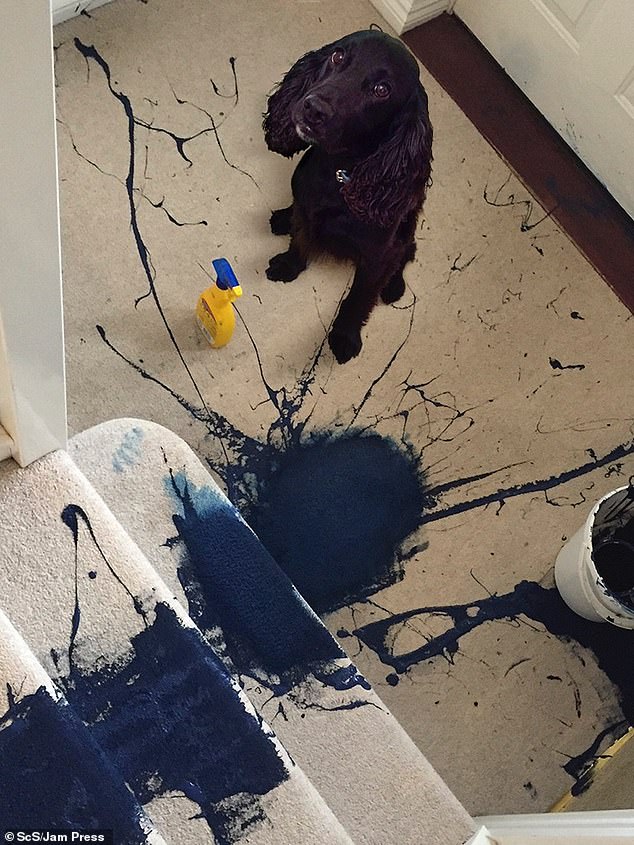 Sofa and carpet specialist SCS has revealed the winner of a contest to find the UK’s most destructive pets. Three-year-old Cocker Spaniel from Kent,  Samuel, came in first after spilling a pot of blue paint over his owner Zara Angelova’s carpet 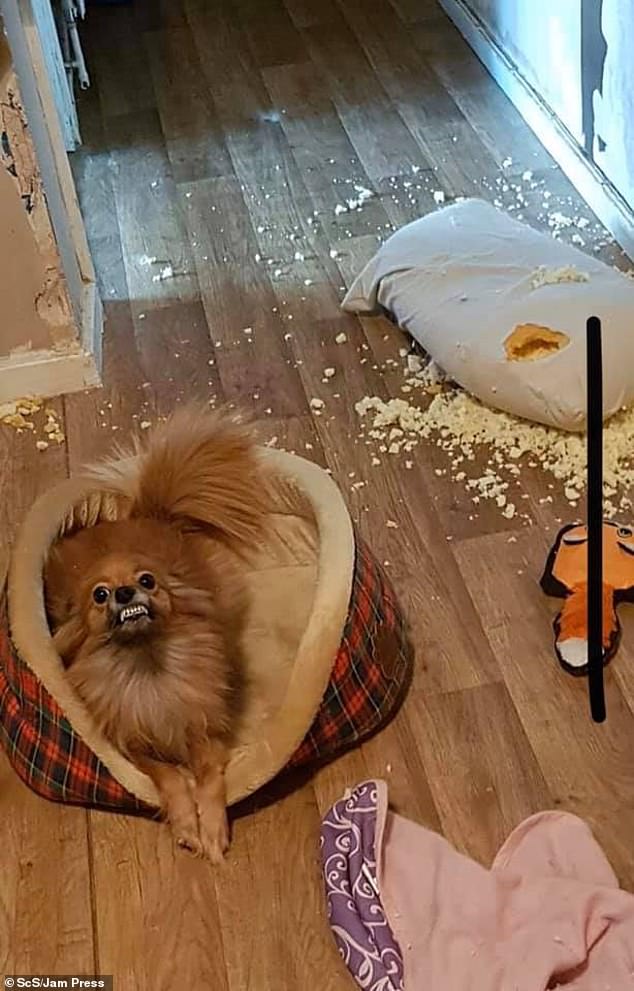 ‘Result? One destroyed carpet and a large bill to replace it all. He looked so sorry that I couldn’t find it in my heart to be angry with him.’

Zara and Samuel beat more than 100 other entries to take the top spot and will receive one of ScS’s brand new Lucy 3 Seater Sofas.

In second place was three-year-old Pomeranian Bella who went on a rampage and left owner Kelly McIntyre’s pillow in tatters and her walls needing significant repairs.

Third place in the competition went to two and three-year-old Pug-Crosses Riley and Teddy after owner Lisa Williams arrived home one day to catch them ripping apart her best cushions. 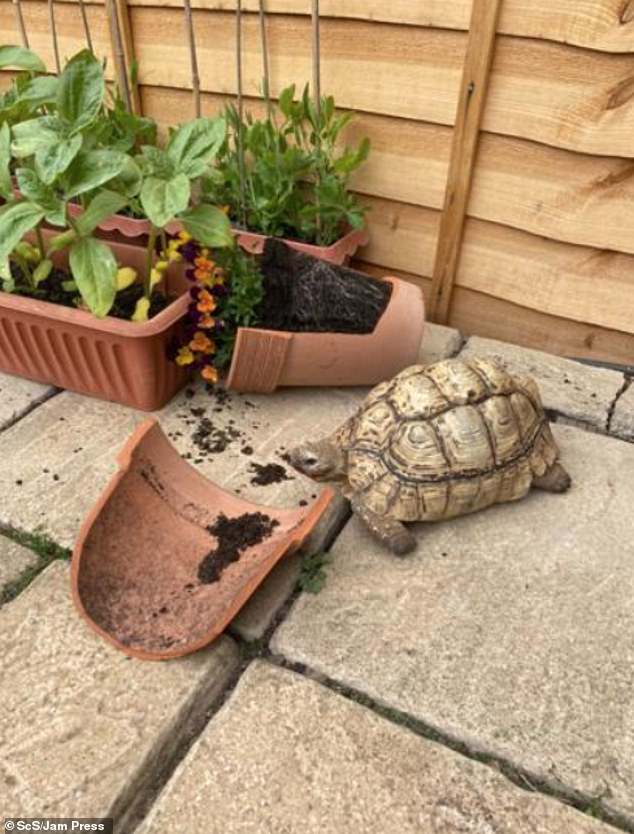 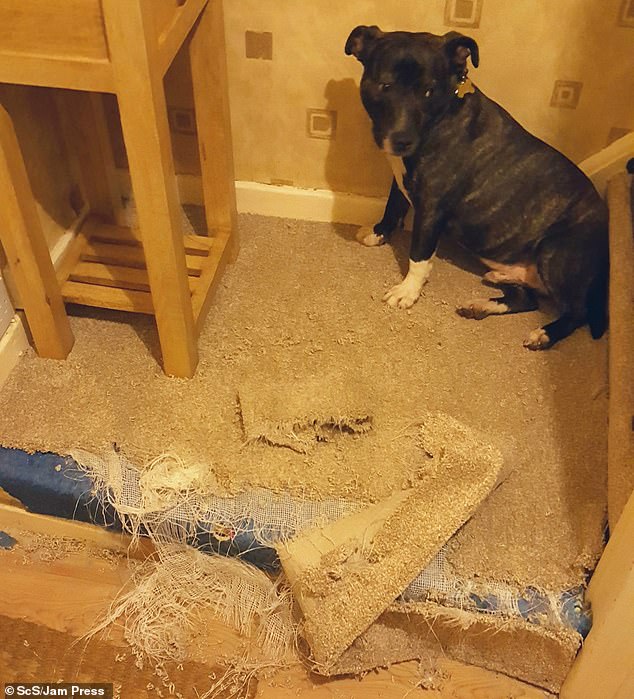 Four-year-old Staffordshire Terrier Bosley, from Newcastle loves to rip his owner’s Rick Haswell’s carpet. Bosley was fifth in the running 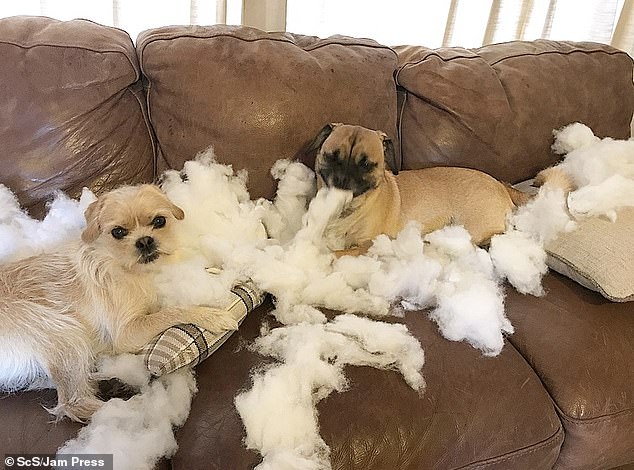 Partners in crime. Lisa Williams, from Exeter, got home to catch Riley and Teddy, her two and three-year-old Pug-Crosses ripping through her sofa’s cushions. The pair came in third 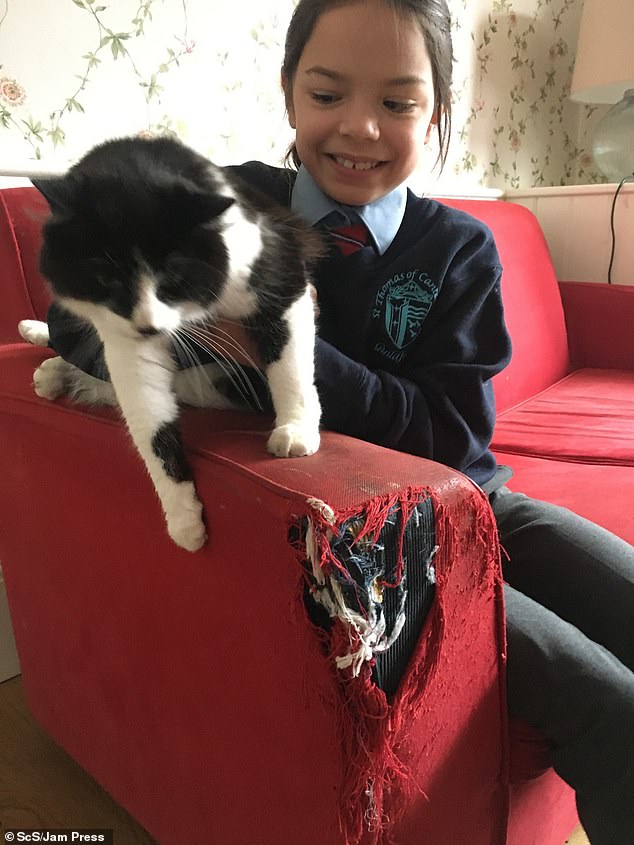 Gillian Mills, from Guildford, was not too happy to see her two-year-old cat Mittens had clawed her way through her red couch. Gillian’s daughter did not seem to mad. Mittens was eighth 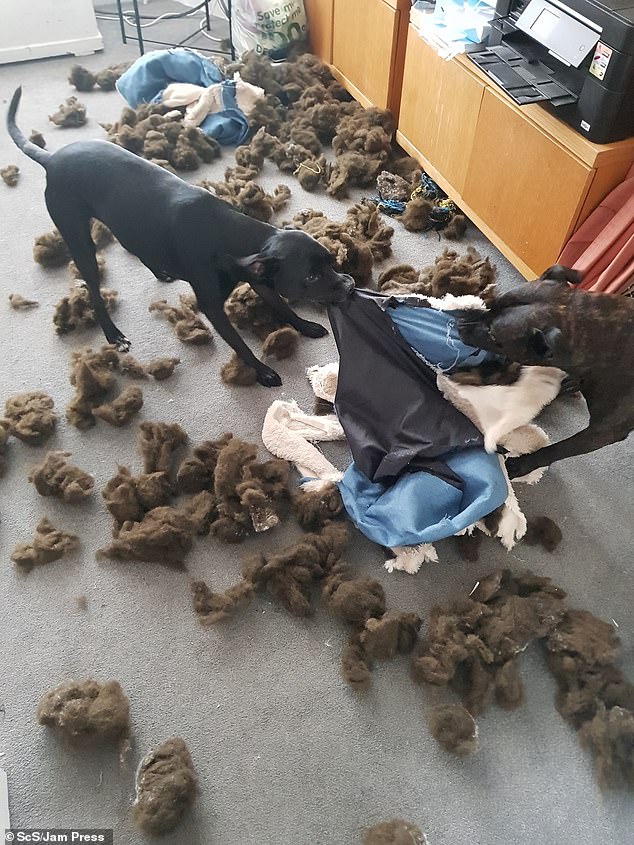 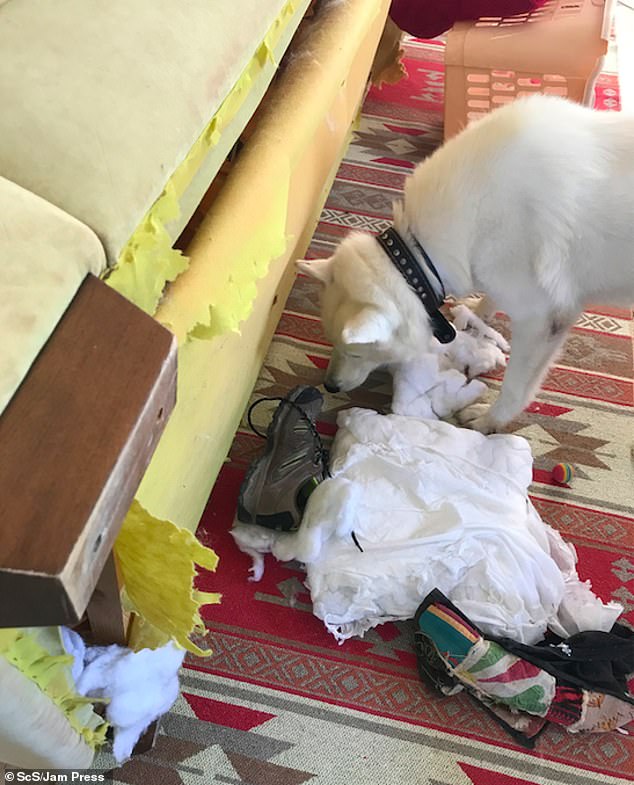 Five-year-old Husky-Cross Roxy, from St Helens, is very excitable and managed to flip her owner Ann-Marie McNicholas’s sofa and rip the fabric that was underneath. Roxy came in ninth in the running for most destructive pet 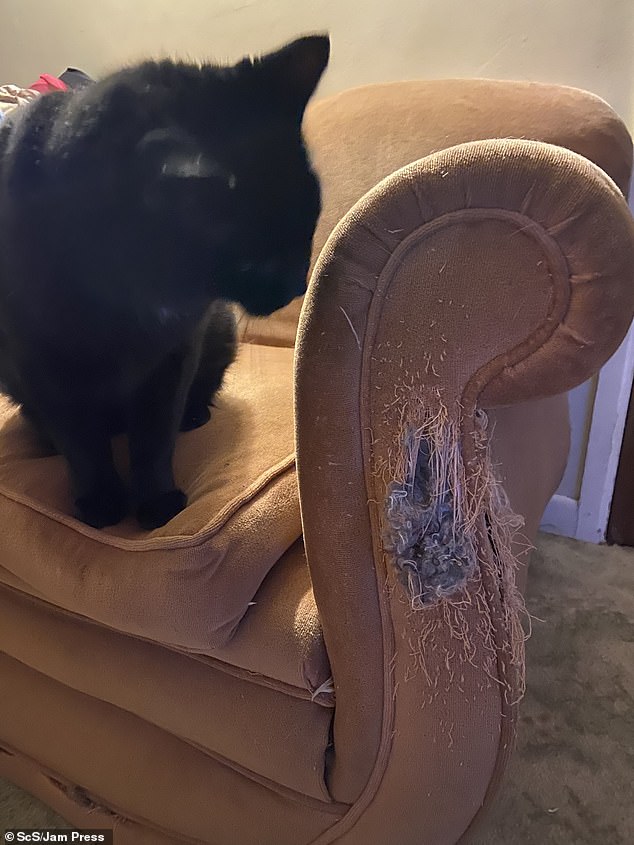 In sixth position, 11-year-old cat Ellie El Gato, from Colchester, can be seen next to her handywork after clawing her owner’s Lindsay Winship’s sofa 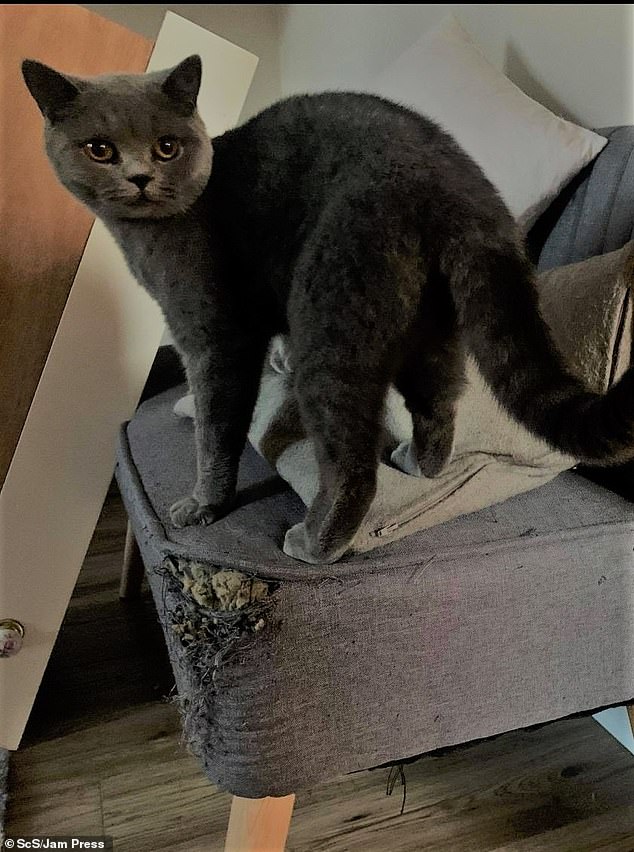 Dora, a one-year-old British blue cat from Eastbourne who is owned by Rebecca James,tore through the chair’s stuffing. Dora was 13th 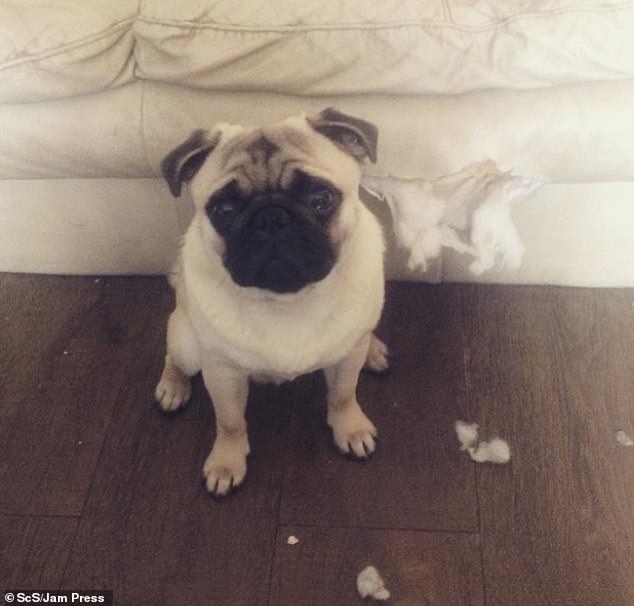 Guilty as charged! Two-year-old Pug Pudsey, from Liverpool, knew he had done something wrong when his owner Katie Corkhill came home. Pudsey came in 14th 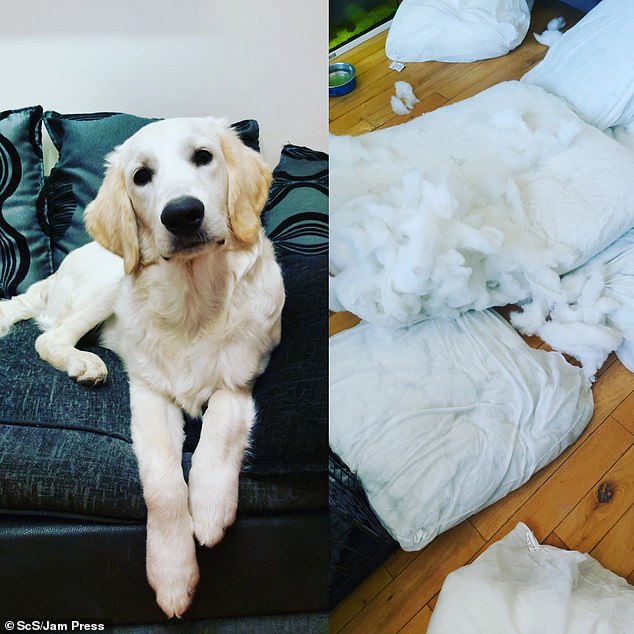 No regrets! Max, a 15-month-old Goldendoodle, ripped through his owner Sharon Williams’ cushions in Worthing. Max came in tenth position 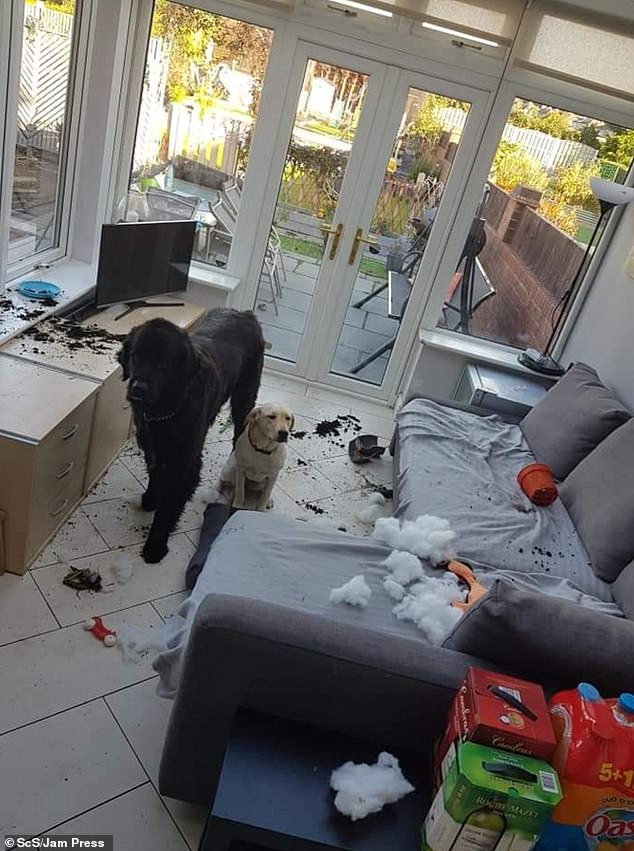 A mischievous giant ! Loki, a four-year-old Newfoundland from Rotherham, made a mess of his owner Theresa Thomas’ conservatory, while her other dog watched on 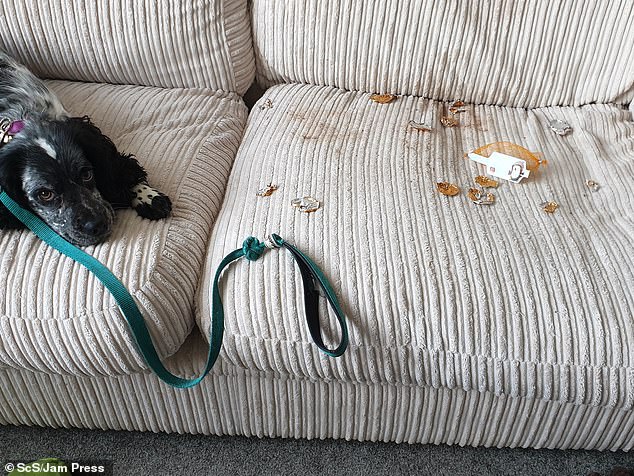 No more treats for you! Choco-addict three-year-old Cocker Spaniel Sprocket, from Bexhill-on-Sea, spread her owner Sam Joslyn’s chocolate coins all over the sofa. Sprocket earned herself the 15th position 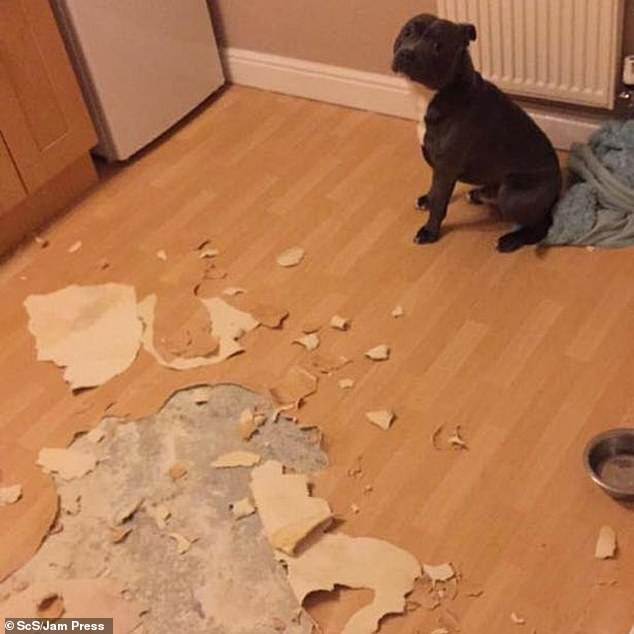 Sheepish dog! In 12th place was Nemo, a five-year-old Stafforshire Terrier from Preston dug a hole through his owner Gary Wilson’s flooring