Huge rock'n'roll speakers. A black rock stage. A tiny rock-red drum kit. Get ready to “Make some noise, Mel-BAWN!” because Rock Bang  the circus rock opera is in town.

Otto and Astrid are a brother and sister indie punk-rock duo from 1990s Berlin. They’ve toured as Die Roten Punkte (The Red Dots) since 2006.

The story for this show has the duo perform in Azerbaijan – where the 2012 Eurovision party is still going – meet Circus Oz on tour, fall asleep in some crates and wake up in Wagga Wagga.

With a new circus family, there is only one thing to do: write some more songs and tell their epic story with a circus show within a rock concert. 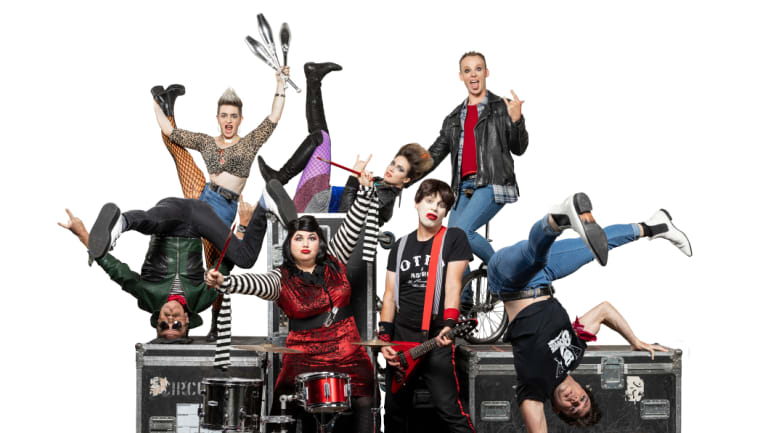 The performers in ‘Rock Bang’ with Circus Oz members led by Astrid and Otto.

Their fairytale begins in rural Germany. They keep their rock make-up and red lipstick but Otto wears shorts and Astrid has pony tails. And they have six acrobats and four musicians (including music-theatre-rock-wonder Casey Bennetto) to create their world and bring their songs to life.

After their tale fractures when Otto and Astrid’s parents are killed in an accident, unicycles ride tracks, punk acrobats become relatives and friends, stunt Astrids tumble, and a gold angel – straight out of Wim Wenders' Wings of Desire – flies.

Their clowning and satire is very rock, very punk and very real. It's as if Otto and Astrid saw the Berlin Wall fall in 1989 or formed the band after seeing Bowie in 1990.

With addictive hits like Ich Bin Nicht Ein Roboter (I Am A Lion) – made all the more wonderful by a troupe of silver dancing robot lions – success was easy. But Otto doesn’t understand Astrid’s love of sex and drugs because he just wants rock'n'roll stability.

Otto and Astrid could win Eurovisionor inspire real an-arch-y. But they also remind us that rock’s really about love, red lipstick and flying in silver spaceship above a crowd of fans. And banging with a circus which knows how to rock.