She spends most of her time parodying their sexiest of snaps, so you’d think Celeste Barber would be one of Hollywood’s most hated people.

But the Australian comedian, 35, has claimed that she counts a string of celebrities as fans of her work after she targeted their pictures.

In an interview with The Times, Celeste said she received a personal message from Cindy Crawford herself to say she’d ‘killed it’ after she mocked her Pepsi commercial, as well as endorsements from Kris Jenner and Gwyneth Paltrow.

The Kardshian momager reposted and article about Celeste’s parody photos, saying: ‘This girl cracks me up. LOL!’

Meanwhile, Goop shared her recreation of Gwyneth covered in mud which appeared on the front of one of its magazines.

Celeste started taking the photos as a running joke between her and her sister, but decided to start posting them online, and now boasts more than five million Instagram followers. 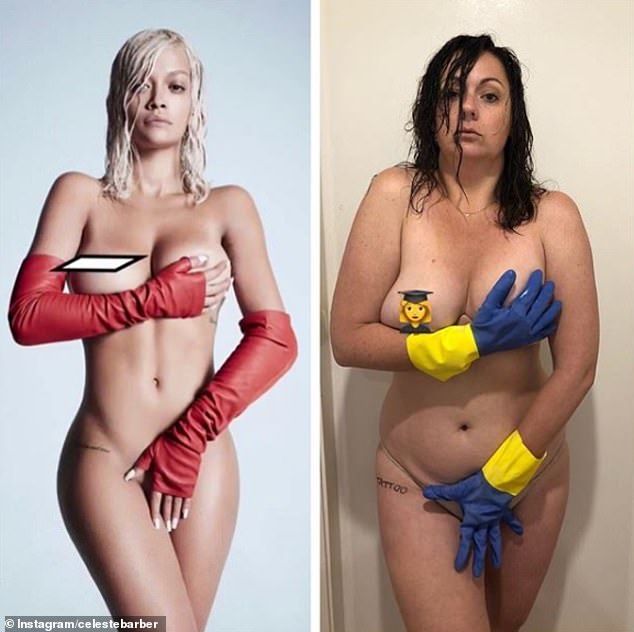 Comedian Celeste Barber has claimed that many of the celebrities she parodies are big fans of work. Pictured: Celeste dresses up as Rita Ora and covers her modesty by covering herself with washing up glove-clad hands 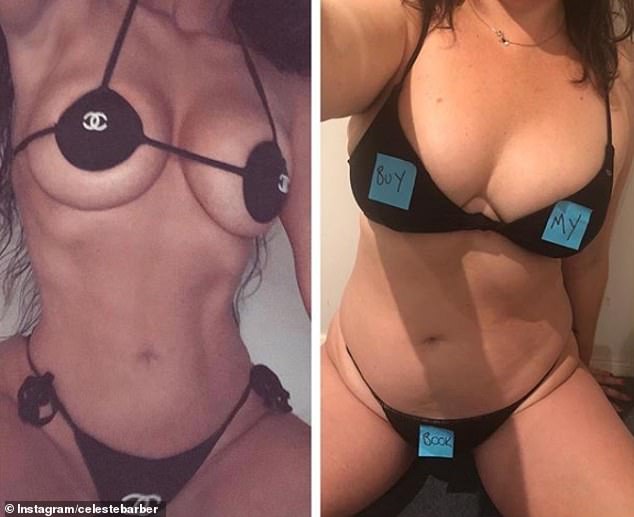 She says the purpose behind them is to show the difference between real life and celebrities’ highly edited and unattainable images.

She explained: ‘Fashion is art and I enjoy the spectacle, but we’re struggling to differentiate [on social media].

‘So when we’re constantly being fed unattainable things passed off as the norm, I just want to shout ”Stop!”’

Her recent victims include Bella Hadid, who appeared on a magazine cover with a sheet wrapped around her naked body with the words ‘I dream’ written on it. 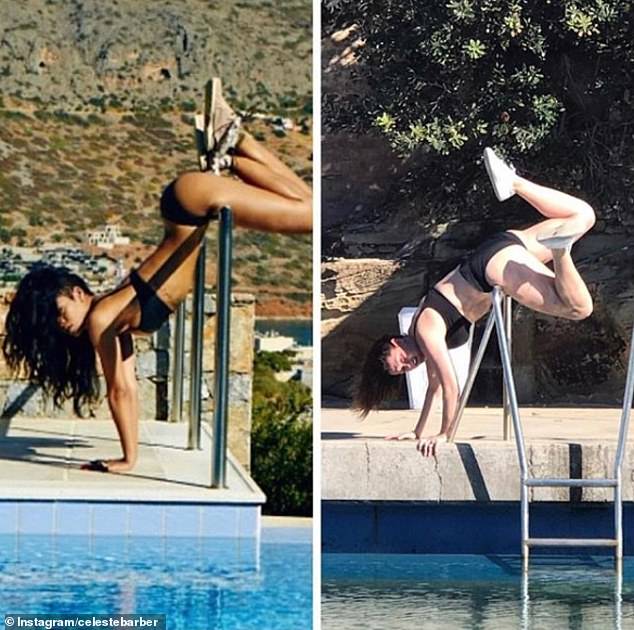 She says the purpose behind them is to show the difference between real life and the lives of celebrities. Pictured: Celester attempts to recreate Rihanna’s sexy poolside pose 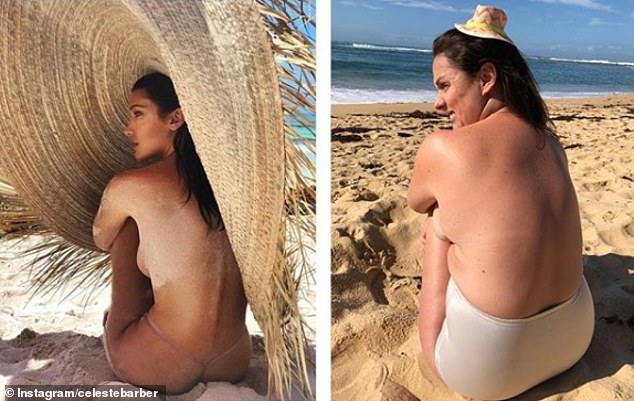 Celeste started taking the photos as a running joke between her and her sister, but decided to start posting them online. Pictured: She poses in a pair of nude underwear and a tiny hat to create Bella Hadid’s sexy beach shoot

Soon after, Celeste posted a picture of herself with a sheet that said ‘I eat’ on the front.

Before that it was Rita Ora, who posed completely naked and covered her modesty with her hands, on which she was wearing leather open-finger gloves.

Celeste recreated the picture with her own naked body, which she covered up with her washing up glove-clad hands. 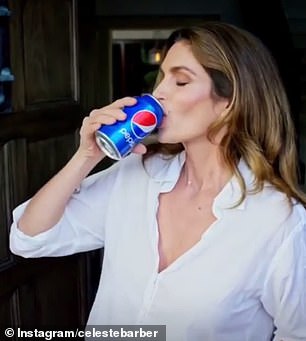 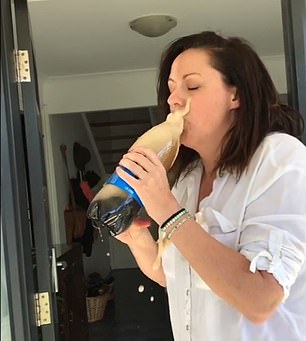 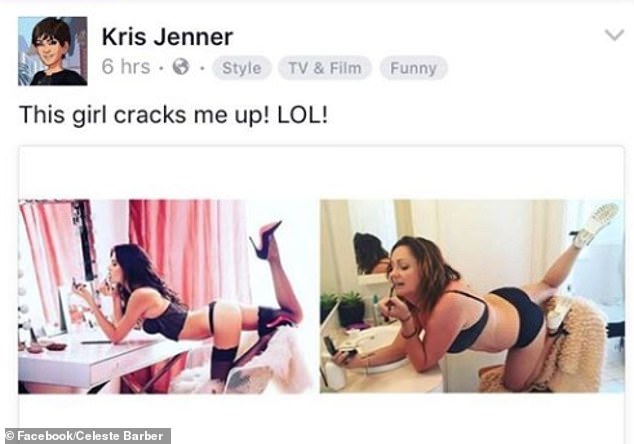 Even Kris Jenner can see the funny side of Celeste’s efforts, even though she regularly mocks her daughters’ Instagram posts 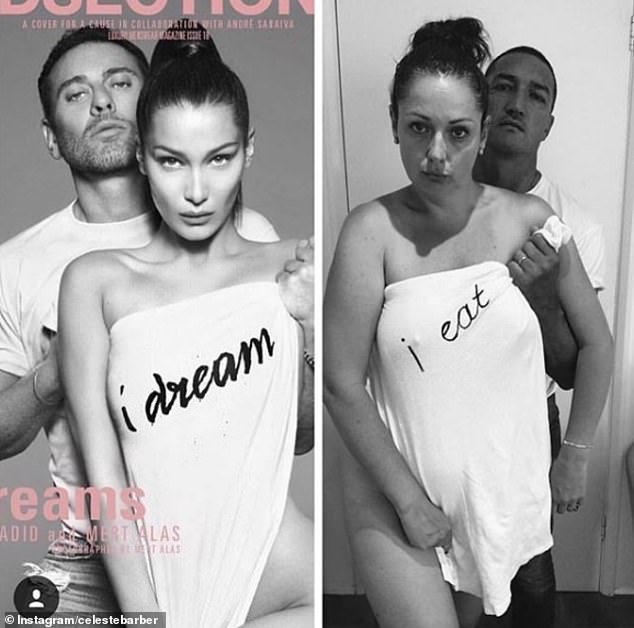 She now boats over 5 million followers on her Instagram account @celestebarber. Pictured: Celeste wraps herself in a towel saying ‘I eat’ to poke fun of Hadid’s magazine cover

She had also mocked Kim Kardashian, who posed in barely there Chanel lingerie, dressing up in a black bikini with Post-It Notes stuck on her crotch and breasts.

Her Instagram account caught the attention of casting agents, and she landed a starring role in ABC show The Let Down, in which she played a ragged parent in a mother’s group.

Last year Celeste was voted as one of the funniest women on the internet, taking out a WhoHaha female comedy award. 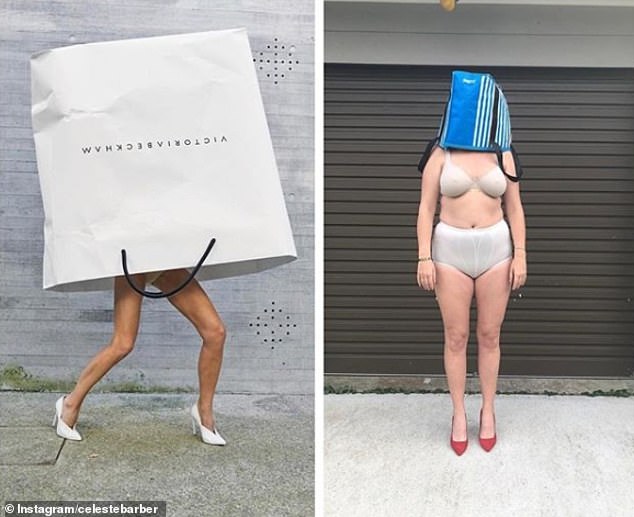 Celeste’s Instagram page has helped begin to open doors where it matters most, her comedy career.

The multi-talented writer and actress has appeared on a slew of shows in her decade in the industry, including All Saints, Home and Away, Wonderland and How Not To Behave.

Celeste also had her own webseries and was a co-writer and performer on ABC’s Late Night Angel Weenie Babies.

Most recently, she has been selling out shows for the Sydney Comedy and Fringe festivals. 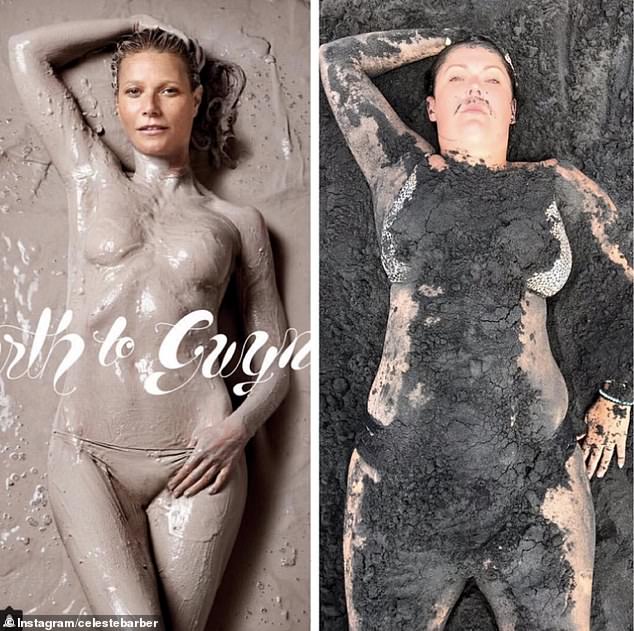