Australian political leaders have declared their confidence in a fair election outcome in the United States in a bipartisan message that countered former treasurer Joe Hockey’s claim of "fraud" in the count.

Prime Minister Scott Morrison urged patience with the tally while Labor leader Anthony Albanese said the democratic process would prevail despite the growing US dispute over the result. 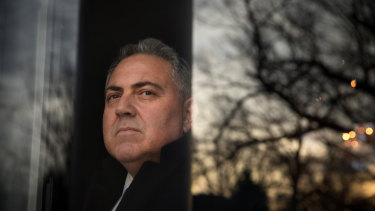 Former treasurer Joe Hockey has stoked controversy with his comments about voter fraud in the US election, despite no such allegations from US authorities.Credit:Evelyn Hockstein

The two leaders did not name Donald Trump or his false claim of "major fraud" on election night but they emphasised the strength of US democratic institutions in deciding the outcome.

But Mr Albanese rebuked Mr Hockey, the former Australian ambassador to the US, for claiming fraud in parts of the election including in Washington DC, where voters backed Democrat candidate Joe Biden by almost 93 per cent.

While Mr Hockey said the 93 per cent result was "hard to believe", previous elections have shown similar support for Democrat candidates in the capital.

Asked on radio station 2GB whether there was fraud in the US election, Mr Hockey said: "Oh, for sure. The question is whether it is enough to change the election outcome – and I doubt it is, but absolutely."

Mr Hockey prefaced his remarks by pointing to thousands of different US authorities involved in the election and the "complete dog’s breakfast" of voting systems and counts across the country.

But his claim of fraud was instantly controversial amid widespread anxiety over Mr Trump’s assertion of fraud and likely legal challenge to the official result, threatening months of turmoil over American leadership.

"It doesn’t help to have Australians make comments that aren’t thought through," Mr Albanese said, raising Mr Hockey’s remarks without being asked at a press conference on Thursday.

Queensland Liberal National Party backbencher George Christensen explicitly endorsed Mr Trump's claim in a Facebook post about "Democrat vote fraud" even though no US authorities have made such allegations.

Mr Christensen said there were "dodgy extra votes" as Mr Trump had predicted in Wisconsin and Michigan.

With news footage showing protesters trying to stall voting in Detroit, Mr Albanese said those who were chanting "stop the count" were really shouting "stop democracy".

"All of us who hold democratic values around the world need to be prepared to speak up for democracy," he said.

Mr Morrison said it would not be appropriate at this point for him to call either Mr Trump or Mr Biden at this point.

"Australia is a partner with the United States and we respect the decisions that the American people make in their democracy and we will be patient and we will await the outcome of their process," he said.

"This is a democracy that has withstood the demands of centuries and I have no doubt it will continue to prevail and continue to be a great partner for Australia."

Former prime minister Kevin Rudd endorsed the approach of expressing confidence in the US process rather than taking aim at Mr Trump.

"To be fair to Mr Morrison, and I’m often critical of him, I think at this stage of the process it is the right posture to adopt – to express confidence in the US voting process," Mr Rudd told ABC TV.

"I think it is irresponsible for people like former ambassador Hockey to take a partisan position.

"But for Australia’s Prime Minister, I think that’s the right course of action at this stage."

That approach should change, Mr Rudd said, if there was interference in the election count or "unusual legal mechanisms" to dispute the result.

New Zealand Prime Minister Jacinda Ardern took a similar approach in remarks in Auckland on Thursday, saying she had faith in US institutions.

"And of course faith that those final votes will continue to be counted and that there will be a final result declared," she added.

"This is another country's democracy and now it's time for us to let it run its course."