The REALLY big breakfast: Diner claims his monster fry-up complete with EIGHT slices of toast and a portion of chips is the best way to start his day – so could you manage it?

A man has divided opinion with a snap of his mammoth fry up featuring eight slices of toast, two eggs, two sausages, two rashers of bacon, hash browns, mushrooms – and a portion of chips for good measure.

Reddit user Millsytime shared a photo of his breakfast from the Sunnyside Up Cafe in Wolverton, Milton Keynes, yesterday.

He described the huge meal as a ’10/10 start’ to the day – but not everyone agrees with him.

Many users have questioned the sheer amount of carbs on the ginormous plate, versus the relatively small amount of protein provided by the meat.

One user wrote: ‘That carb to protein ratio is all wrong. Two toast and two fried bread is sufficient, that plate would be better used for more sausages and bacon.’ 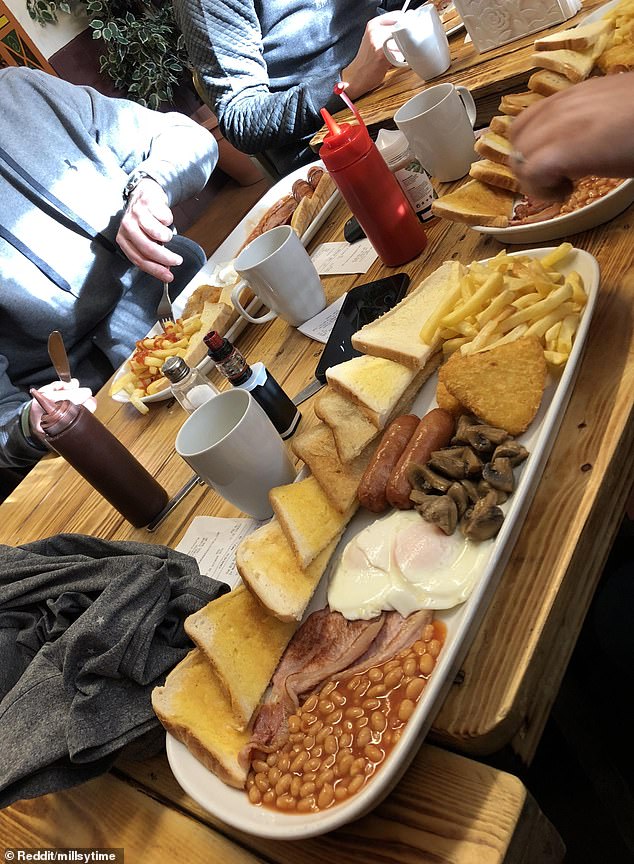 A Reddit user has divided opinion with this snap of his mammoth fry up featuring eight slices of toast, two eggs, two sausages, two rashers of bacon, hash browns, chips and mushrooms

Another added: ‘I don’t get it, bacon looks rank, sausages look like school dinner quality. Waaaaaaay too much bread and what’s on them is clearly not butter but some oily spread with yellow food colouring.

‘The rest of it looks good like, but still a disappointing fry up all the same.’

Others claimed the breakfast – which was posted in a subreddit dedicated to the UK – was too American.

One Redditor responded to the breakfast by saying: ‘There are very concerning American influences here.

‘I fear this is one step away from pouring syrup over the entire thing.’

Another wrote: ‘5/10. Too much toast. Not enough meat. The yanks can keep their fries and hash.’

But plenty of Brits have admired the breakfast from afar and are considering a trip to Milton Keynes to try it out.

One user said: ‘Sunnyside Cafe in Wolverton? Breakfast of champs! Prefer the breakfast Bunny Chow myself though…’

Another added: ‘Are those mushrooms? damn you Brits sure know how to make breakfast.’