People seem rather excited about Joe Biden's dogs. What's the big deal? Well, firstly, one of the President-elect's two German shepherds – a very good boy named Major – will be the first shelter dog to take up residence in the White House. Secondly, it's been a gloomy four years since the US has had a "First Dog". Thirdly, how great are dogs? I mean, just look at this face.

Fair call. So tell me more about these dogs. Champ, the older of the two, has been with the Biden family since puppyhood, bought in 2008 from a breeder. Joe and Jill Biden then adopted two-year-old Major in 2018 from the Delaware Humane Association.

I take it animal rescue groups are rapt? Absolutely. There's been a big push in recent years for people to adopt abandoned dogs from pounds or shelters rather than buy pups from commercial breeders and risk contributing to supporting puppy farms. The shelter Major came from celebrated the news of Biden's win, captioning their Instagram post, "First Dog Elect".

Locally, RSPCA Australia shared the same photo and wrote: "It's fantastic to see the adoption message being spread far and wide."

And the crowds went wild? Basically. Everyone loves a good news story, but this might be particularly true during a year in which we've dealt with a deadly pandemic, lockdowns, a ravaged global economy and, of course, a highly polarised US election. The popular dog rating Twitter account, @WeRateDogs, leapt on the news and gave both Major and Champ a score of 14 out of 10 and declared they'd be an honour to pat.

Other dog lovers also joined the revelry. Even, um, cats.

Is Donald Trump not a dog person? He's never explicitly said whether he likes dogs, but we know he has lived with at least one dog before and apparently they weren't the best of mates. His ex-wife, Ivana, recalled his dislike for her poodle, Chappy, in her memoir. "Donald was not a dog fan," she wrote, adding: "How can you not love a dog that acts like he’s won the lottery for life just because he sees you walk through the door?"

So what has Trump actually said about our furry friends? Trump explained his dog-less state at a rally in 2019, saying the idea of getting a pooch seemed "a little phony". "I wouldn't mind having one, honestly, but I don't have any time," he said. "How would I look walking a dog on the White House lawn?"

Sure, but why does it matter if Trump isn't into dogs? He's actually the first president in almost 120 years to not have brought a dog to the White House, and there have been only two other presidents without any pets entirely: James Polk in the 1840s and Andrew Johnson in the 1860s. So presidential pet ownership has been a long held tradition, started by George Washington himself. There's even a book – First Dogs: American Presidents and Their Best Friends – documenting the custom and there's an oft-quoted remark that's been attributed to President Harry Truman: "If you want a friend in Washington, get a dog." 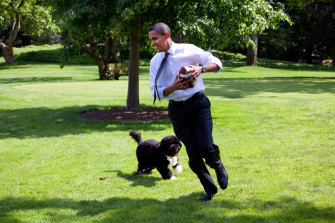 President Barack Obama plays football with the family dog Bo on the South Lawn of the White House in 2009.Credit:Getty

So I guess it's been a big contrast to Trump's immediate predecessors? Indeed. Barack Obama was frequently photographed with his two Portuguese water dogs, Bo and Sunny. And both George W. Bush and Bill Clinton had pets during their presidency – Bush owned three dogs and a cat, while Clinton had a cat and a dog.

Did Biden jump on this? You betcha. In October last year he tweeted: "Some Americans celebrate #NationalCatDay, some celebrate #NationalDogDay – President Trump celebrates neither. It says a lot. It's time we put a pet back in the White House." And, hey presto, man's best friend became an election issue.

For real? Yep. Of course, there were far more salient issues in the lead-up to the election, but in September, a pro-Biden group named Dog Lovers for Joe released an ad criticising Trump and urging voters to "choose your humans wisely". And it's true that research has shown pet ownership can soften someone's image and make them more likeable, so it's entirely possible that Trump could have benefited from having a wagging tail by his side.

OK, more importantly, when are Major and Champ moving to the White House? That'll be following Joe Biden's inauguration day on January 20. No doubt these woofers will love their big new backyard. And Champ, who's no stranger to Washington, will show little brother Major the ropes. Here's to our new FDOTUS duo.

Get a little more outta life

Start your week with practical tips and expert advice to help you make the most of your personal health, relationships, fitness and nutrition. Sign up to our Live Well newsletter sent every Monday, here for The Sydney Morning Herald, here for The Age, here for Brisbane Times and here for WAtoday.