Getting into this year’s Frieze Art Fair on Randalls Island will cost you $57, plus the round trip on the ferry. But that’s nothing compared to what it cost nearly 200 galleries to exhibit there. And so dealers have made the reasonable decision to bring a little of everything that sells — which may account for the conservative vibe. That said, there are many islands of daring, including special sections focused on solo presentations, small galleries, the influential gallery JAM and virtual reality. We sampled them all — along with the mainland fairs that are part of Frieze Week. Our art critics Martha Schwendener and Will Heinrich pick a handful of the best booths under Frieze New York’s big tent. 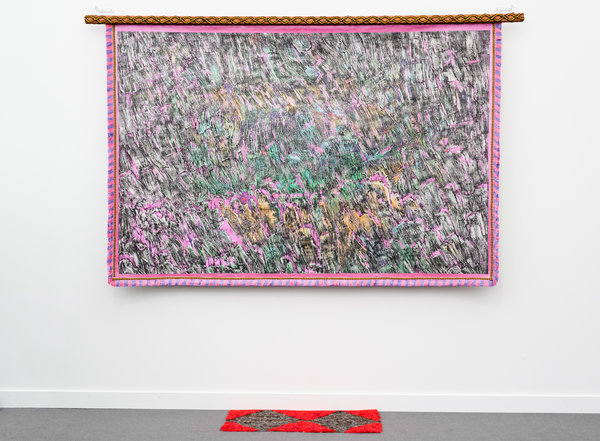 One of the strongest single-artist booths is a joint presentation by Bridget Donahue Gallery and LC Queisser, who represent the artist Lisa Alvarado in New York and the Republic of Georgia, respectively. Ms. Alvarado made her acrylic-on-canvas pieces, each painted with a thrilling zigzag pattern, as backdrops for performances by the Natural Information Society, in which she plays the harmonium. If the fair’s not too loud, you’ll be able to hear the band’s hypnotic music, too. WILL HEINRICH

Two exceptional but very different displays are on view in the fair’s midsection. At Casey Kaplan gallery, Matthew Ronay’s carved wooden sculptures, pieced together into abstract, evocative organic configurations in various coral hues, are placed on plinths and feel like an oasis amid the fair’s chaos. (Mr. Ronay also has an exhibition on view at Kaplan’s Chelsea location.) Martine Gutierrez continues her rampage as the Indigenous Woman, a transgender alternative-fashionista at Ryan Lee. In photographs and faux-fashion spreads, Ms. Gutierrez combines traditional Mayan and Guatemalan garments and fabrics with fantastic and futuristic accessories and makeup to conjure new, fluid forms of being. MARTHA SCHWENDENER

The Frame section of Frieze, devoted to galleries 10 years or younger, is particularly good this year. Befitting the ethos of the emerging artists they represent, the booths are platforms for performance or installations, with linoleum or AstroTurf covering the floors. The New York gallery Company is hung with paintings by Jonathan Lyndon Chase that feature roughly drawn figures or graffiti, as well as crude sculptures of a toilet seat or a dollar sign. Yanyan Huang treats the booth at Bank, a Shanghai gallery, as an “immersive portal” (according to a handout) in which traditional ink drawings merge with digital applications. Nearby, Diedrick Brackens’s colorful tapestries at the Los Angeles gallery Various Small Fires join traditional materials with references to figures like African-American cowboys. SCHWENDENER

The Tehran gallery Dastan (appearing here as Dastan’s Basement) has hung more than 50 portraits by the artist and architect Bijan Saffari. A member of the royal family who left Iran for Paris after his country’s 1979 revolution, Mr. Saffari was also gay, which made his position doubly precarious. The portraits are rather simple and conservative, drawn in graphite and colored pencil. And yet they are sensitive and closely observed, and they gain by their group presentation, appearing like a narrative of his circle of friends in the ’70s and ’80s. There is an elegiac tone to these drawings; the artist died days before the current edition of Frieze opened. SCHWENDENER

In a fair dominated by painting, David Lewis of the Lower East Side and Montreal’s Galerie Antoine Ertaskiran, making its Frieze debut, stand out with presentations that could pass for gallery shows. Four cool acrylics by New York painter Charles Mayton, at Lewis, feature schematic eyes and hands in jazzy mash-ups of shelves, bars and circles. Jane Corrigan’s large wet-on-wet paintings of women on the go, at Ertaskiran, are exquisite brown and yellow collisions of impatience and poise. HEINRICH

Several New York galleries have mounted outstanding painting displays in which artists bend the medium in a variety of ways. At Foxy Production, Srijon Chowdhury, Gina Beavers and Sascha Braunig offer reinventions of Gothic romanticism, surrealism, Op or Pop Art. Simone Subal is showing the work of Emily Mae Smith, whose paintings are slick and whip-smart updates and appropriations of posters from the ’70s and ’80s. Maryam Hoseini works both on and off the wall at Rachel Uffner, but combines abstracted Persian imagery or techniques with contemporary painting. Sarah Cain’s take on painting at Galerie Lelong offers candy colors, cutouts and a floor flooded and stained with pigment. They remind you of paintings’ origins — in childhood — and suggest a kind of joyful, delirious regression. SCHWENDENER

The fair’s outstanding Spotlight section, curated by Laura Hoptman of the Drawing Center, is dedicated to “significant work by overlooked figures.” They include Yüksel Arslan, a Turkish painter born in 1933 who moved to Paris at the invitation of André Breton and died in 2017. His “Arture 439, Sans Titre, l’Homme,” from 1992, in a joint presentation by Turkish galleries Galerist and Galeri Nev, is a gloriously strange gallimaufry of interspecies sex acts and quotations from the artist’s scientific reading, drawn with homemade colors. Susan Hefuna makes ink drawings inspired by the intricate wooden screens of her Cairo childhood. The examples presented by Pi Artworks of London and Istanbul are done on overlapping sheets of tracing paper fastened with rice glue. The multitude of tones and textures create a fascinating tension between clarity and ambiguity — the drawings are like letters of a foreign language glimpsed in a dream. HEINRICH

The Diálogos section of Frieze includes solo presentations of Latin American art, organized by Patrick Charpenel and Susanna V. Temkin of New York’s El Museo del Barrio. I was particularly taken with Mariela Scafati’s hybrids of paintings and sculpture at the Buenos Aires gallery Isla Flotante. Ms. Scafati takes wooden bars where canvas is stretched and treats them like bones, joining the parts together in puppetlike configurations, sometimes bound or “wearing” a jacket or a pair of pants. SCHWENDENER

There’s something magical about William T. Williams’s early 1970s “Diamond in a Box” paintings, hard-edged geometric patterns in blazing colors. The subtle misdirection of those patterns, and the complicated rhythm of the colors, mean you could look at them forever. Michael Rosenfeld presents a dozen never-before-shown acrylic-on-paper works from the same period. In these, a wiggly meander snakes in and out of concentric circles filled with vibrant brush strokes — they’re like Bauhaus takes on the Aztec calendar. HEINRICH

Spanish gallery PM8 presents 80 black-and-white photographs by the Lithuanian photographer Gintautas Trimakas, shot in the mid-90s and hung in three long rows. The piece shows 80 women with their heads and legs cropped out. Though the backgrounds range from white to nearly black, and the clothing and body types are all over the map, the typological presentation wears away these differences and leaves the figures all looking more or less interchangeable. It’s a deeply cynical take on both the consumerist Western freedoms available to Lithuanians after their 1990 independence and on the fate of all human bodies — the women aren’t so much living people as corpses in waiting. HEINRICH

V.I.P.s have access to the Deutsche Bank Wealth Management Lounge at Frieze New York. But nearly everyone can benefit from PPOW’s display of paintings by Steve Keene, which are on sale for $15 to $50. Mr. Keene was heavily influenced by indie rock bands in the early 1990s — his friends in Pavement, Silver Jews and the Dave Matthews Band — and the idea of selling quick, sketchily rendered paintings like cassette tapes. Using a stage in PPOW’s booth as a pop-up studio, he will produce hundreds of paintings on thin plywood panels — they are part endurance performance, part public art stunt. The vibe feels like one in a record store during an album release party. SCHWENDENER

Through May 5 at Randalls Island Park; frieze.com. Tickets are limited and only available online. 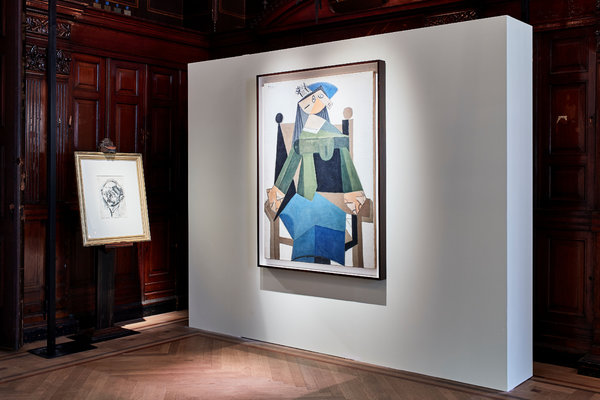 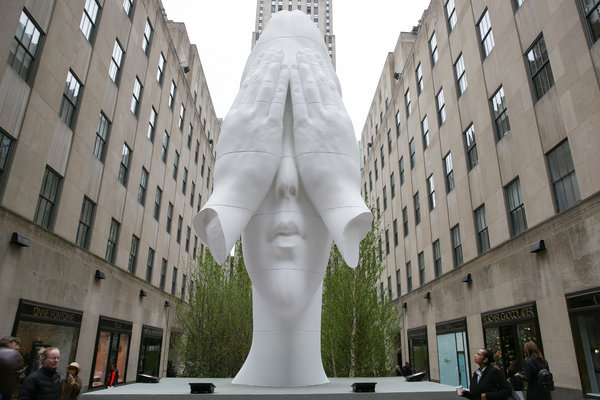 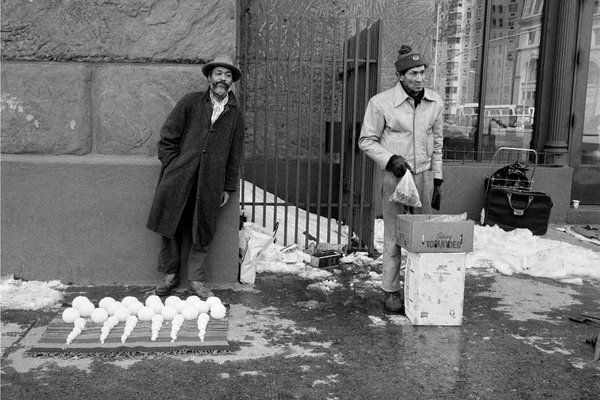 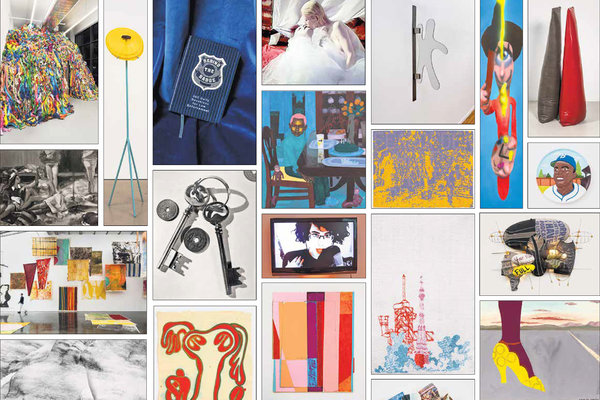