CASH strapped Brits can save almost a tenner by shopping at Asda for their Christmas dinner ingredients this year, new research shows.

A price war means the cost of a slap-up festive dinner is just over £4 per person – about the same as a High Street sandwich meal deal, claims Which. 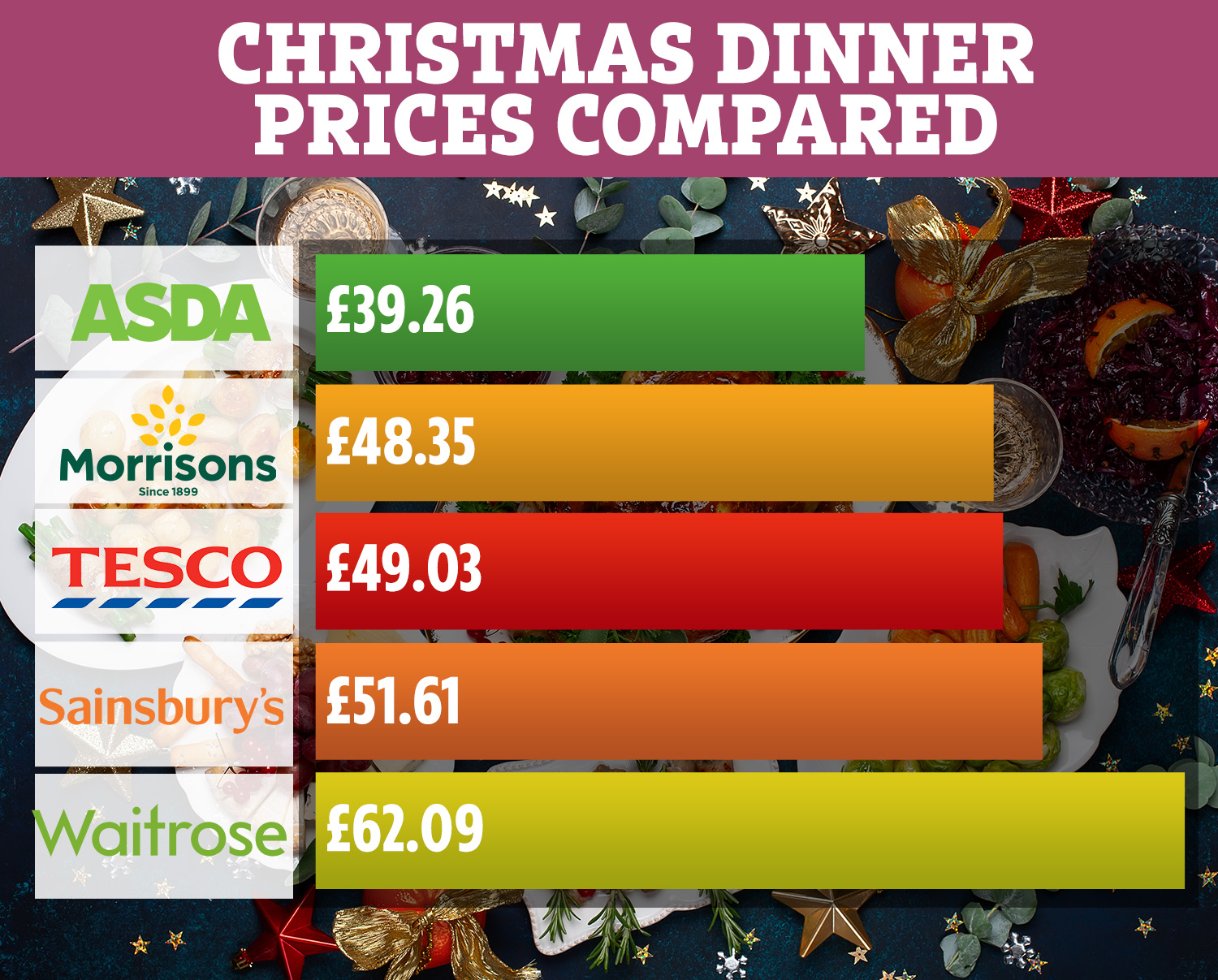 Families can gobble up turkey and all the trimmings for a family of six for under £40 or £6.54 a head from Asda.

There’s actually enough for ten people plus leftovers if bigger gatherings are allowed, bringing it down to £4 each – and if not there are even more leftovers.

All the five major supermarkets in the analysis by Which? – which also included Morrisons, Sainsbury’s, Tesco and Waitrose – were cheaper than a year ago for the basket of 15 festive food staples.

Asda at £39.26 is by far the cheapest this year – where a trolley-load of turkey, sprouts and cranberry sauce is almost £10 cheaper than rivals.

Waitrose was the most expensive, with the equivalent items costing a hefty £22 more than Asda at £62.09.

The trolley of festive food included a medium turkey crown and sides such as sprouts, King Edward potatoes, parsnips, red cabbage, carrots and Ocean Spray cranberry sauce as well as ingredients needed to make important elements of Christmas dinner, including 1kg of onions and a four pack of Knorr chicken stock pots.

How to cut the cost of your grocery shop

SAVING on your shop can make a big difference to your wallet. Here are some tips from comparison site Money.co.uk about how you can cut the cost of your shopping bills:

Some products were the same price across most of the supermarkets – such as the cranberry sauce at £1 everywhere apart from Tesco, at £1.50.

Aldi, Iceland and Lidl were not included in the full comparison as they do not stock the same range of items.

But Which? did compare the price of frozen turkey crowns across supermarkets including the discounters.

Aldi did not stock this size but instead offered a large turkey crown for £13.69 – better tha similar sized birds elsewhere.

Natalie Hitchins, from Which?, said: “Whether you’re gearing up for your annual Christmas supermarket sweep, or you’re ready to book an in-store collection slot, our elves have crunched the numbers and found big differences between the cost of yuletide foods across the supermarkets.

“While price might not be everything, with a tough year behind us many shoppers will want to make sure they are getting a good deal on their Christmas food, so it’s good to know that a sackful of turkey and all the trimmings could cost you less than £40.”

In the last couple of years, supermarkets have been going head-to-head in a Christmas price war with last minute deals.

Here's all the major supermarket's Christmas Eve and New Years festive hours so you can see when stores are open.