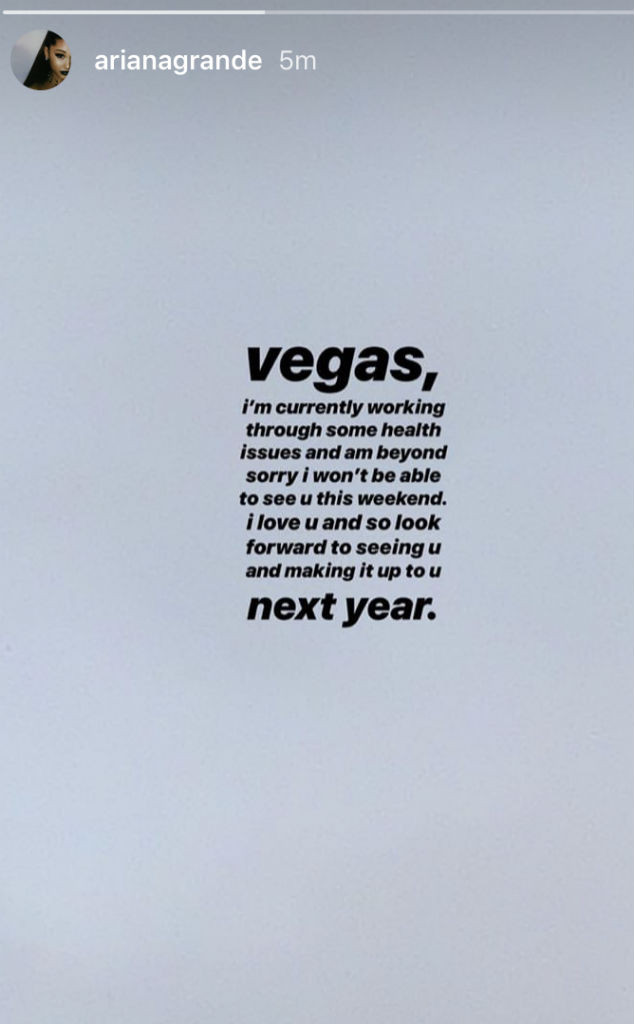 Ariana Grande won’t be taking the stage in Las Vegas this weekend.

The 25-year-old “No Tears Left to Cry” singer has canceled her scheduled performance at The Chelsea at The Cosmopolitan of Las Vegas. Grande was set to sing at the venue on Saturday, just days before New Year’s Eve, but is currently “working through some health issues.”

“Vegas, I’m currently working through some health issues and am beyond sorry I won’t be able to see u this weekend,” Grande wrote to her fans on her Instagram Story on Friday. “I love u and so look forward to seeing u and making it up to u next year.”

A rescheduled date has not yet been determined. It’s been a trying year for Grande, from the death of her ex-boyfriend Mac Miller in September, to her split with Pete Davidson. In recent weeks, the singer has been laying low, celebrating the holidays with her family and friends.

Over Christmas, Grande revealed to fans on social media that she FaceTimed with her estranged father, Edward Butera. Grande previously revealed to Seventeen that she had fallen out of touch with her father.

“It’s private, but it happened last year,” Grande told the magazine in 2014. “It took me so long to be okay with it. The thing that got me there was embracing the fact that that I am made up of half my dad, and a lot of my traits come from him. So much of me comes from my father, and for so long, I didn’t like that about myself. I had to accept that it’s okay not to get along with somebody and still love them.”