The Trans World Airlines Flight Center at JFK International Airport has been a New York landmark for decades.

Designed by Eero Saarinen and opened in 1962, the iconic structure has sat abandoned since 2001, when TWA went bankrupt.

It was officially declared an NYC Landmark in 1994 and listed on the National Register of Historic Places in 2005.

Now, the terminal is set to reopen as a 512-room luxury hotel, complete with six restaurants, high-end retail, a vintage plane transformed into a cocktail lounge, and a rooftop infinity pool and observation deck.

The Trans World Airlines Flight Center at JFK International Airport has been a New York landmark for decades. 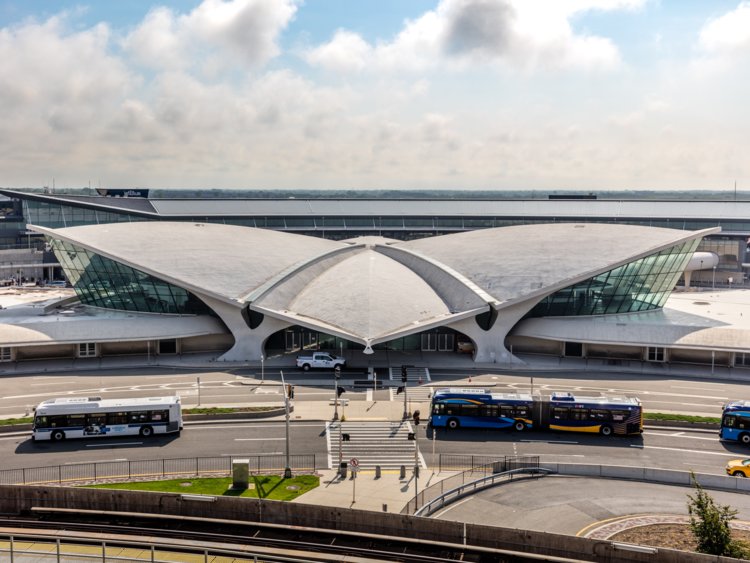 Designed by Eero Saarinen, the iconic structure has sat abandoned since 2001, when TWA went bankrupt.

Opened in 1962, the original terminal included features that were innovative at the time, such as baggage carousels, covered jet bridges, and the clustering of gates away from the main terminal. 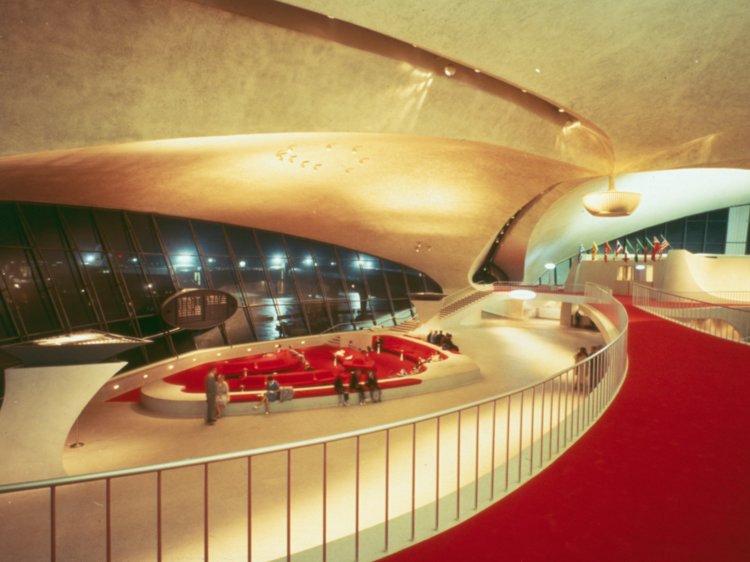 But the terminal’s downfall was that its parking bays were too small to handle larger, modern aircraft.

The terminal is famous for its unique architecture and bright red carpeting and seats. 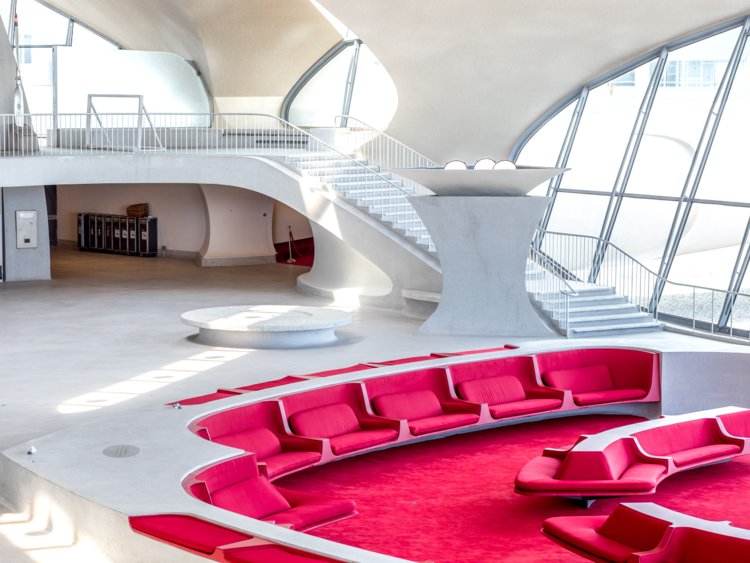 The terminal’s architecture style is reflected in the Gateway Arch in St. Louis and the Bell Labs building in New Jersey, both structures designed by Eero Saarinen.

The building sat empty for decades, and its boarding gates were dismantled. 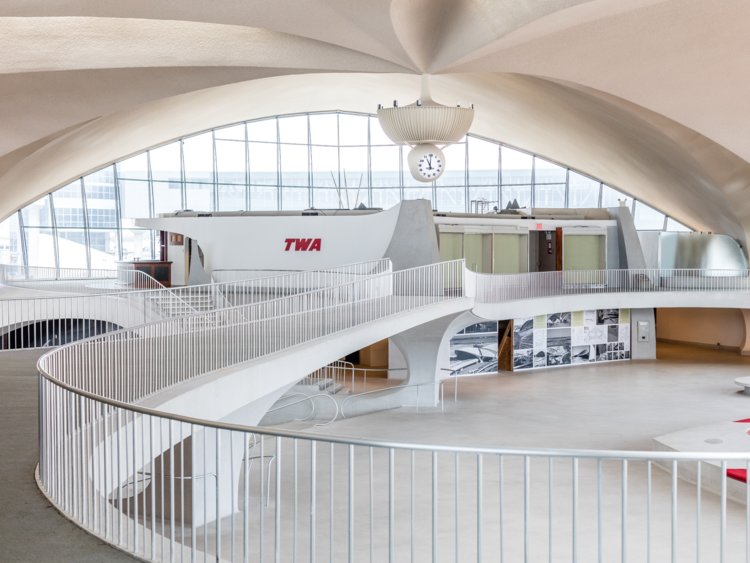 The historic structure sits in front of today’s Terminal 5, home of JetBlue.

Now, the flight center is set to reopen as the TWA Hotel, a 512-room hotel complete with six restaurants, high-end retail, a cocktail lounge, and a rooftop pool and observation deck. 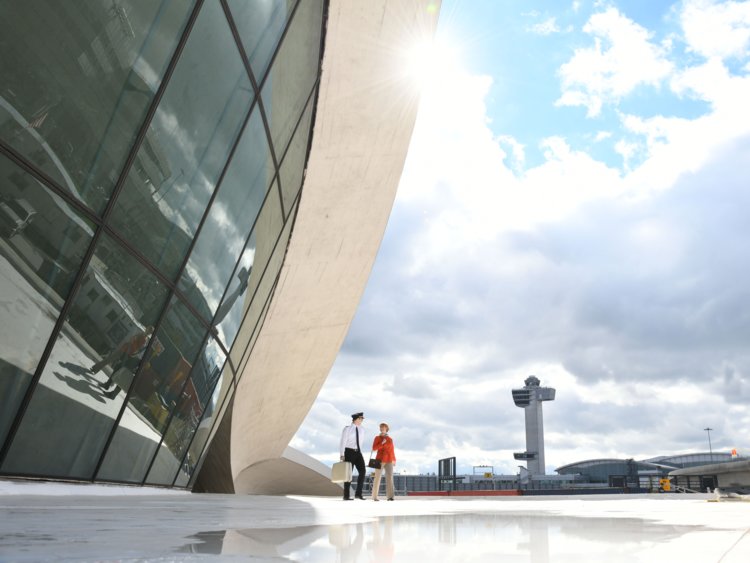 The hotel’s soft opening is on May 15, 2019, with a grand opening event planned for the fall.

The project is a collaboration of the developer, MCR, JetBlue, and the Port Authority of New York and New Jersey.

The terminal’s famous lounge has been restored to its original 1962 design and transformed into a cocktail bar called the “Sunken Lounge,” operated by the Gerber Group. 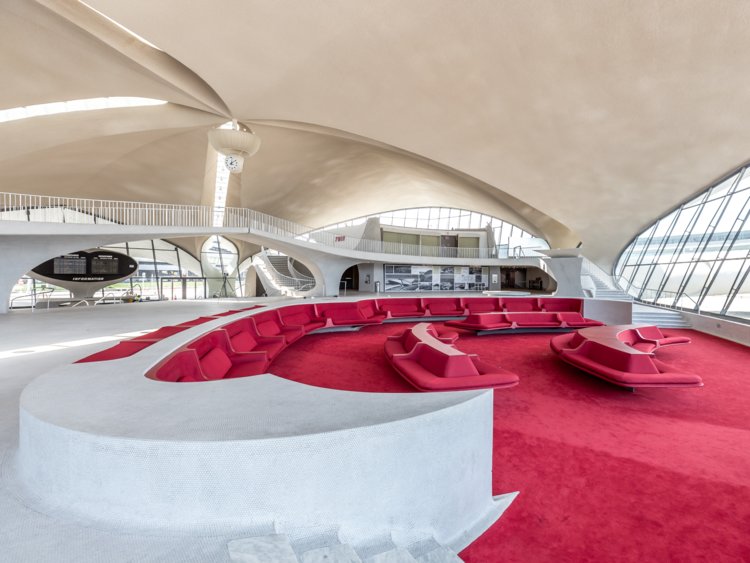 Guests will be able to look out through floor-to-ceiling windows at the hotel’s 1958 “Connie” airplane parked on the tarmac.

The 1960s-inspired cocktails will include a classic Old Fashioned (whiskey and bitters) as well as an updated version of the Royal Ambassador Cocktail (Champagne, orange juice, and Grand Marnier), which was reportedly once served to Trans World Airlines’ most elite passengers. 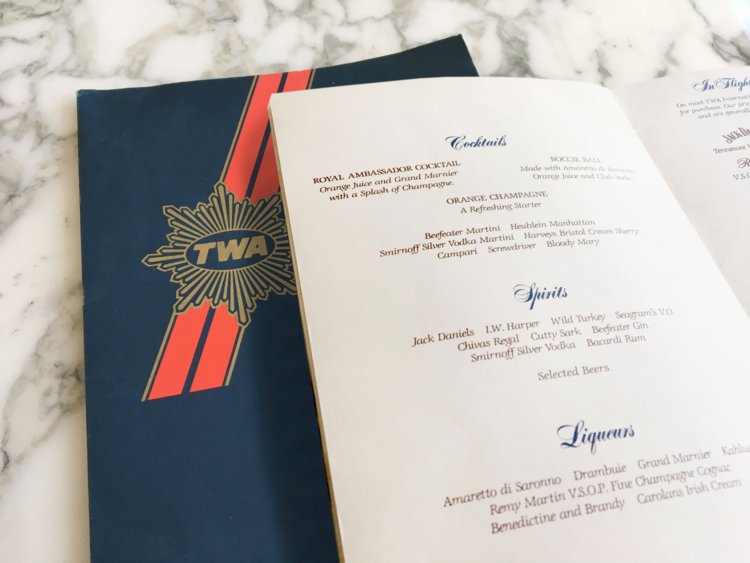 It will also serve wine, beer, and “elevated bar fare.” 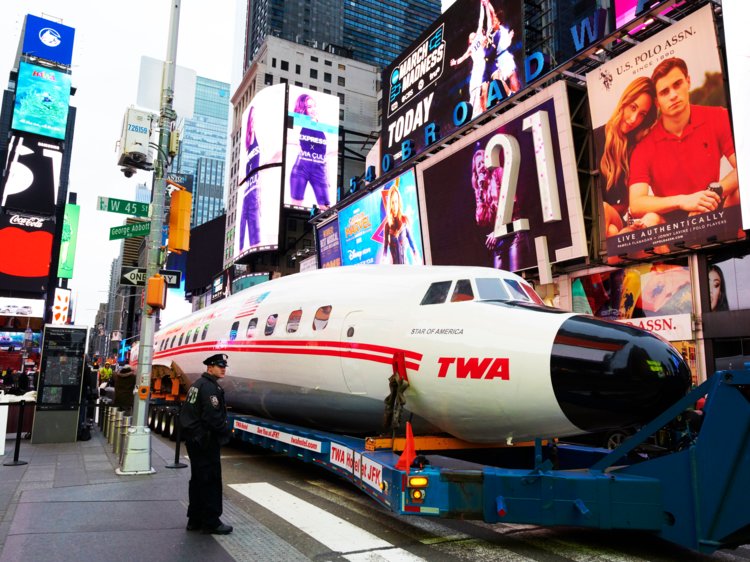 TWA renovated the cabin and turned the plane into its very own cocktail lounge, where guests will be able to make two-hour reservations to sip vintage cocktails inside the retro aircraft.

The hotel includes 512 guest rooms with rates starting at $249. 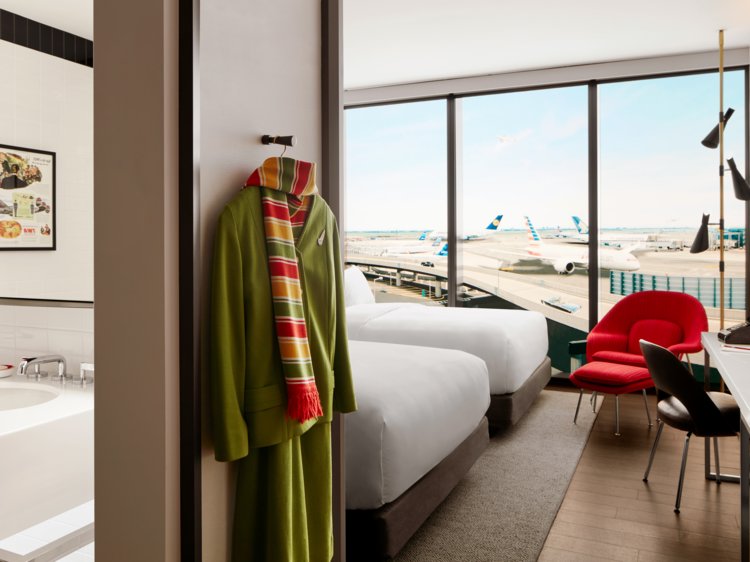 The guest rooms will not be in the original Eero Saarinen structure, but in brand-new buildings right behind it.

The room’s floor-to-ceiling-windows, made by Fabbrica, are designed to cancel runway noise. 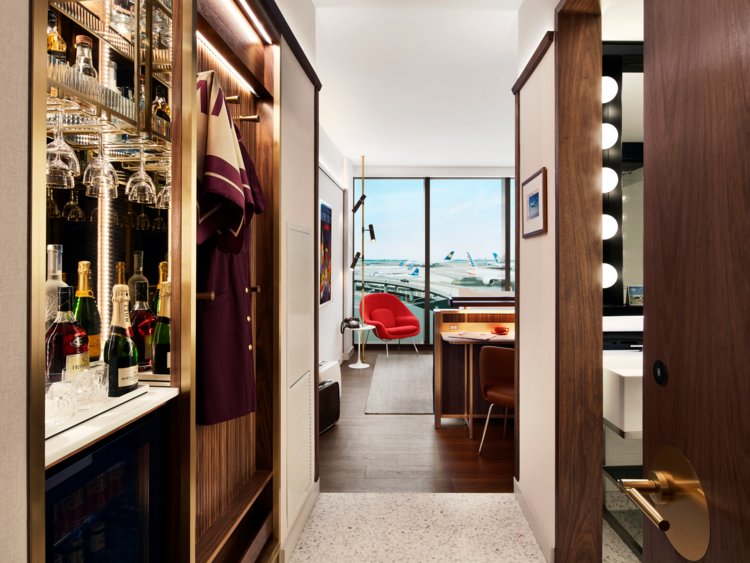 They’re the second-thickest glass walls in the world after the wall at the US Embassy in London, according to TWA.

The rooms are outfitted with classic Saarinen midcentury modern furniture, walnut ceiling trim and accents, and a bed lined in brass. 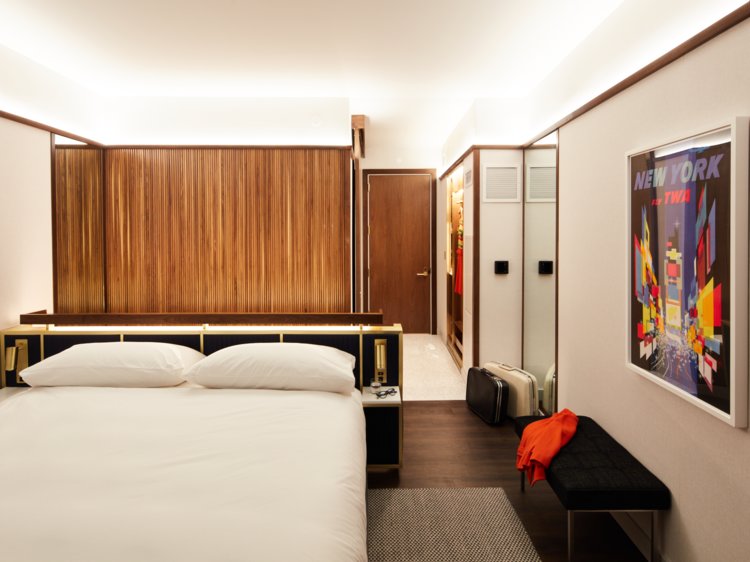 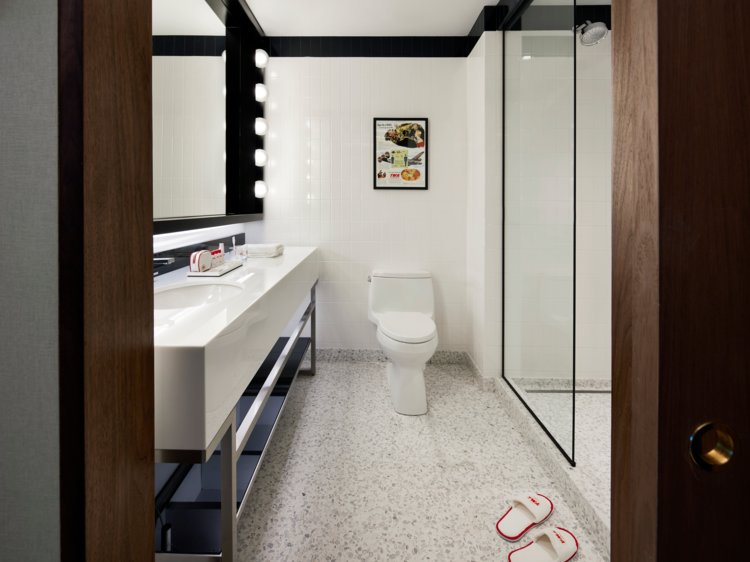 Then there’s the rooftop infinity pool. The pool will be open 365 days a year and turned into a heated “pool-cuzzi” during the winter months. 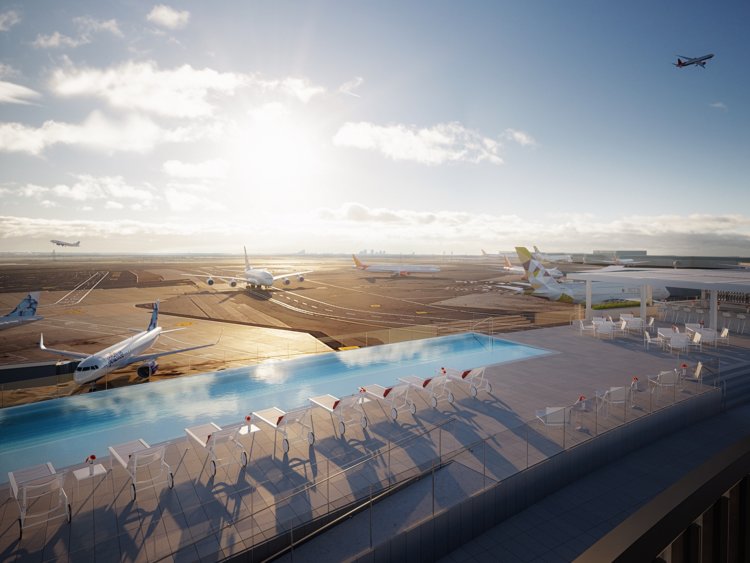 The pool water is super-pure, according to TWA, because it’s purified every 30 minutes versus every six hours like a standard pool. According to their press release, the water can be heated to 100 degrees.

The pool and its 10,000-square-foot observation deck will overlook one of JFK’s busiest runways.

The Gerber Group will also operate a pool bar, which will serve cocktails and food from a full kitchen.

The hotel’s lobby will feature an Intelligentsia coffee bar that serves rotating in-season coffees as well as espresso drinks, flash-chilled cold coffee, tea, and Sudden Coffee, a high-quality instant coffee for those rushing to catch their flight. 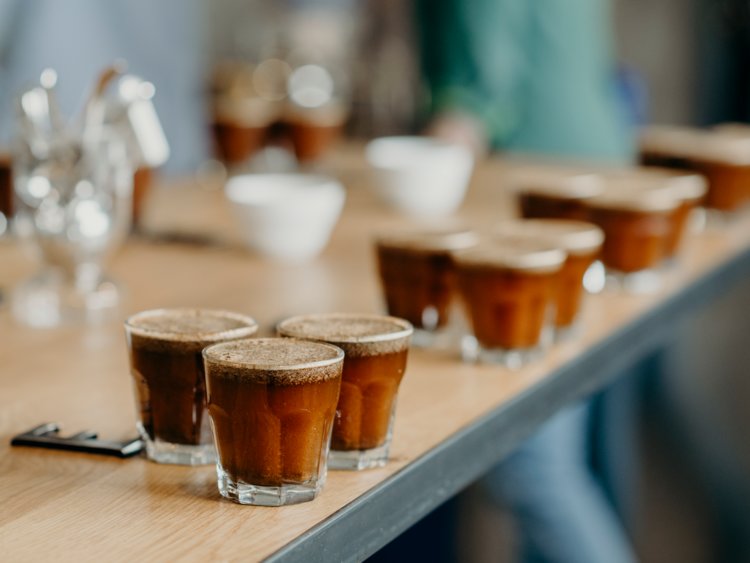 There will also be coffee carts throughout the hotel grounds, and in the events space. 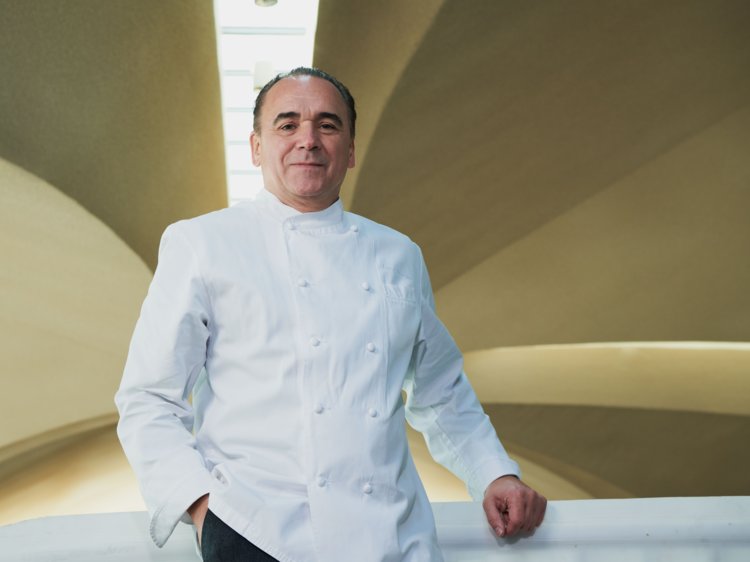 The restaurant will serve breakfast, lunch, dinner, snacks, and cocktails at a “medium price point,” according to press materials.

Among the hotel’s high-end retail options will be luxury watch brand Shinola. 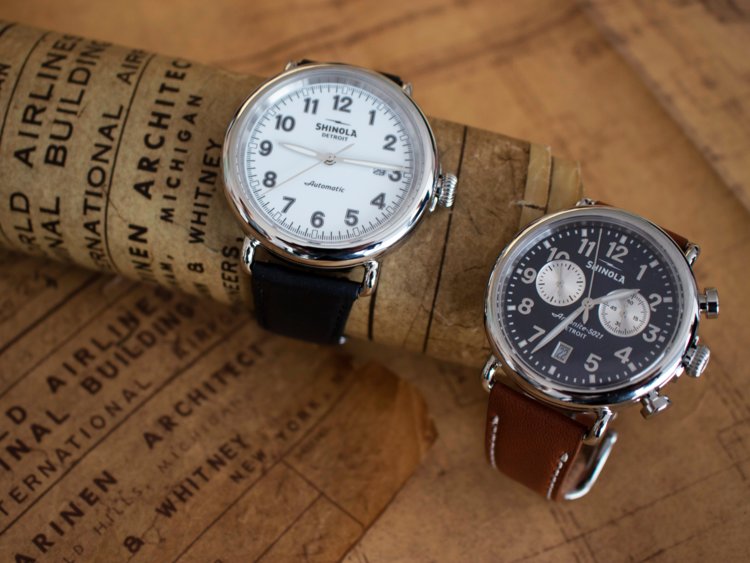 The store, which will have a custom watch bar, will also sell leather handbags, wallets, journals, and audio equipment.

A monogramming station will emboss names or initials on Shinola’s leather goods free of charge.

SEE ALSO:Here are all the over-the-top amenities in Brooklyn's tallest building, from an infrared sauna and a stroller valet to the highest infinity pool in the western hemisphere