Jihadis are plotting a devastating CHEMICAL WEAPONS attack in Britain and could launch a chlorine bomb on London Underground, security chiefs warn 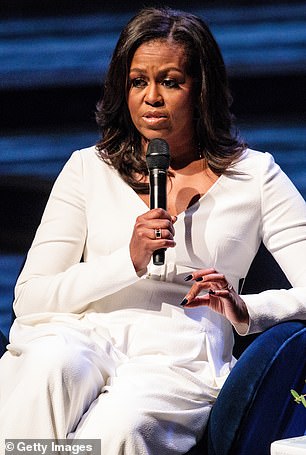 She could have filled the Royal Festival Hall ten times over, where she was on stage talking to novelist Chimamande Ngozi Adichie, since tickets for the event sold out within minutes of going on sale.

Her beguiling memoir, Becoming, is top of the bestsellers charts on both sides of the Atlantic.

Why are people, especially women, so enthralled by her? I think I know the answer, having met her in 2009 when she and her husband travelled to London for his first major international trip as President of the United States.

They were here for the G20 summit hosted by our then Prime Minister, Gordon Brown. While the various world leaders were closeted in a conference room, Sarah Brown was detailed to look after the ‘spouses’ – the gender-neutral term deliberately employed in case Angela Merkel’s husband decided to join. Sarah set up a morning of entertainment and lunch at the Royal Opera House and asked me to organise commemorative photographs by Mario Testino.

The spouses all gathered in the Crush Bar. The head-scarved figure of Mrs Erdogan (wife of Turkey’s Recep Tayyip Erdogan), the lilac-suited Russian Svetlana Medvedeva (wife of then President Dmitry Medvedev), Laureen Harper (wife of then Canadian PM Stephen Harper) and a confident Sarah Brown in a royal blue cardigan and skirt. 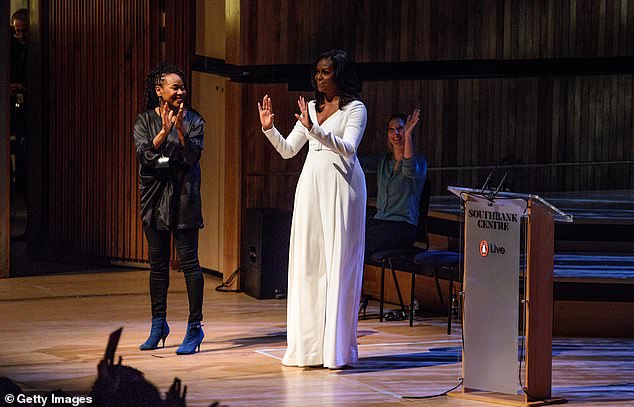 They were joined by J. K. Rowling, who was to read a book extract, and the delightful Maggie Darling, wife of the then-Chancellor Alistair, who helpfully bustled around introducing herself as the ‘next-door neighbour’ – possibly a trifle baffling to foreign guests unaware of the geography of numbers 10 and 11 Downing Street.

And finally, there arrived Michelle Obama, who swished into the room with a blue ballerina-style full skirt and harlequin patterned top, instantly transforming the low-key gathering, its polite chatter reminiscent of a parent-teacher meeting, into a historical event. In seconds, her mere presence reduced everyone else to bit-part players. Because she is a mega-watt star.

A part of her power was physical – she looked incredible – big and strong. Her double-row pearl necklace was outshone by her gleaming white teeth and her false lashes could have swept the red carpet below our feet. She worked the room with smiles and jokes, bending just a fraction to talk but without a trace of the apologetic hunch so many tall women adopt. 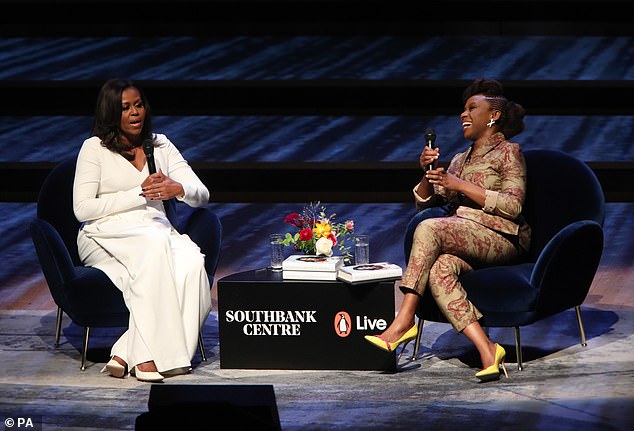 Her camaraderie instantly defrosted the formal atmosphere as she shared her excitement at having met the Queen the previous day, joking that when she called her daughters to tell them of this great event they were utterly disinterested, preferring to share their plans for upcoming April Fool’s Day.

At no point did she demonstrate anything other than complete ownership of the space or a jot of the insecurity she might well have felt only two months into her new role as wife of the most powerful man in the world.

After lunch she apologised for being the first to leave as she was ushered into the motorcade waiting to escort her to the Elizabeth Garrett Anderson girls’ school.

Last week she returned to that school in North London, where 92 per cent of the pupils are from black and ethnic minorities and many are severely economically underprivileged, to instil another generation with her powerful message that they should not limit their aspirations. That she had once been just like them.

That the future they wished for was theirs if they worked hard enough and reached out far enough to grab it.

But the truth is that she isn’t just like them. She isn’t just like most of us. She is a rare force of nature with the energy of a supernova. In her new book she describes her younger self: ‘If there was a challenge to vault, I’d vault it.’

As a working mum she would go to the gym at 5am each day – aided by her own dutiful mother who would arrive at her home even earlier to cover for her.

As First Lady, the weekends away with friends she organised at the presidential retreat of Camp David were known as Boot Camps, where keep-fit and challenging tasks were the order of the day rather than cocktails and sleep-ins. Again and again, she talks of how she has been motivated by her desire to ‘prove herself’ – even though with two Ivy League degrees, the oratory of Mark Antony, well-balanced and intelligent daughters, and her superstar husband, she has already achieved more than most people could ever dream of.

It’s interesting to wonder what she would have been like if she had been born white. If, from her very earliest years, she hadn’t been spurred on by the determination to demonstrate that she could, would and should be a part of a world she felt automatically excluded her.

If she hadn’t been driven by a sense that she would always have to be more clever and more hard working than a white woman to justify her seat at the table. If she hadn’t viewed the world around her as a combat zone of prejudice and inequality that she had to conquer.

I hope that last week, as she received a standing ovation on stage, dressed head-to-toe in white, she finally allowed herself to feel what the rest of the world knows to be true: she has, most definitely, proven herself.

Brave wife who’s my Woman of the Year 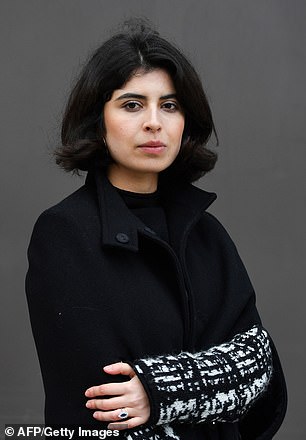 Daniela Tejada, right, is the wife of Matthew Hedges, the British academic given a life sentence in the United Arab Emirates after being falsely accused of spying [File photo]

Speaking of inspiring characters, my woman of the year vote goes to 27-year-old Daniela Tejada, right, the wife of Matthew Hedges, the British academic given a life sentence in the United Arab Emirates after being falsely accused of spying.

Her decision to go public about her husband’s plight would have been a lonely and brave one. No doubt she was being urged by the Foreign Office to keep quiet and let the behind-the-scenes workings of officialdom try and secure his freedom.

But her action almost certainly hastened his eventual pardon and release by bringing his fate into the court of public opinion and thereby ratcheting up the urgency for the new Foreign Secretary, Jeremy Hunt, to get him out of there.

I don’t mean to belittle Daniela’s achievement by adding that, under unimaginable emotional pressure, she always appeared beautiful with a composure and articulacy well beyond her years or experience.

Surely Netflix is at this moment commissioning a film based on the couple’s story. The privilege of playing Daniela will be much fought over.

Last week’s massive O2 outage caused the kind of pandemonium that should be another warning signal for us not to be so dependent on our smartphones.

I had to stay in all morning to wait for some gutter cleaners who never arrived. When I rang the company – on a non-O2 network – they told me that the cleaners had been unable to find our house because their GPS was not working.

They added that they had already lost more than £2,000 worth of work that day. If they’re making that kind of money by lunchtime, you’d think they could at least fork out for some A-Zs for their drivers to carry in their vans.

Your card? I chucked it in the bin

I’ve received my first Christmas cards of the season. Yes, I know some see them as ludicrous, cluttering, ecologically unsound symbols of a time gone past, but I love them.

My only caveat is that they should be topped and tailed individually with some kind of acknowledgment that the card was intended for us specifically.

Cards where (and I’m naming no names) the sender hasn’t bothered to address them personally or, in the case of those from businesses, even sign them, get dropped straight into the recycling – environmentally dodgy glitter allowing.

Isn’t one of the world’s most irritating and unwelcome questions: ‘Can I be honest with you’?

No. Please don’t even ask.