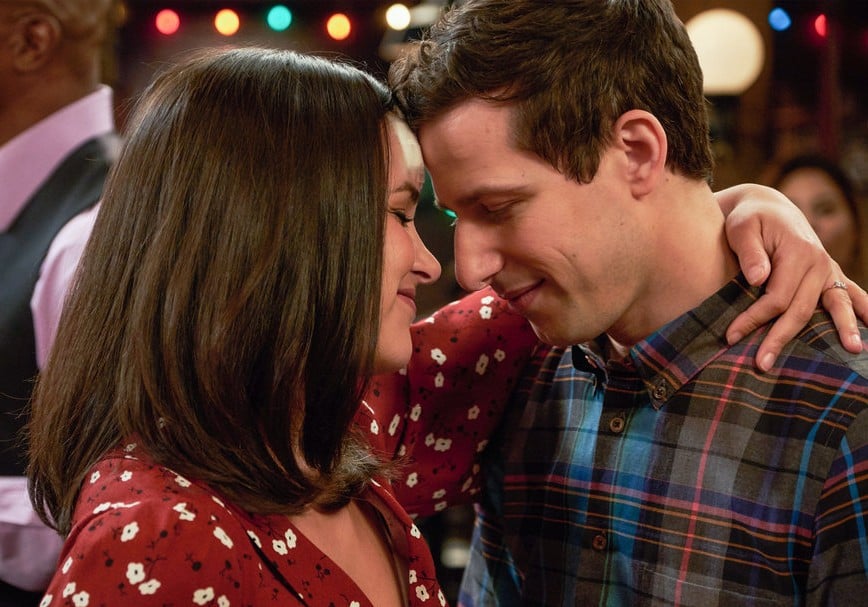 There are so many things that Brooklyn Nine-Nine gets right, it’s impossible to name every reason we love it. Is it the amazingly talented cast, which also happens to be incredibly diverse? Is it the perfect blend of humor, action, and feel-good sap that it manages to infuse into each episode? It’s probably all those things and more — including the creation of TV’s most precious couple: Jake Peralta (Andy Samberg) and Amy Santiago (Melissa Fumero).

If there’s one thing B99‘s cocreator Michael Schur knows how to do, it’s create an iconic couple. Much like The Office‘s Jim and Pam and Parks and Recreation‘s Ben and Leslie, Jake and Amy are the kind of couple who make you believe in love. When they first interact in season one, their relationship mostly consists of Jake pulling Amy’s proverbial pigtails, which is annoying but also amusing because Amy always gives as good as she gets. Though Jake is a bit of a man-child, he respects Amy and her authority, even if he pokes fun at her type-A personality. The two have become better versions of themselves over the past few seasons, which can be in and out of their relationship (she drank orange soda and he read Harry Potter!), which is pretty much what you’re supposed to do in a healthy relationship.

So if you’re like me and have known that Jake and Amy were destined to be since episode one, you will definitely enjoy this roundup of some of their sweetest moments ahead. Keep reading, ya jags!