It’s the most wonderful time of the year! As the Us Weekly film critic, I’m obviously referring to the return of the Starbucks red cups. Coming in a close second: A slew of holiday movies so promising that they might as well be tied up in a ribbon. Crowd-pleasing comedies? Done. Superhero extravaganzas? Duh. Offerings for the kids? Yup. Oscar winners doing Oscar-y things in Oscar-y movies? Like you even have to ask. Here are the 21 picks, many of which I’ve already seen and pre-approved. Please forgo watching Love, Actually for the 182th time to catch at least one of these shiny cinematic presents. 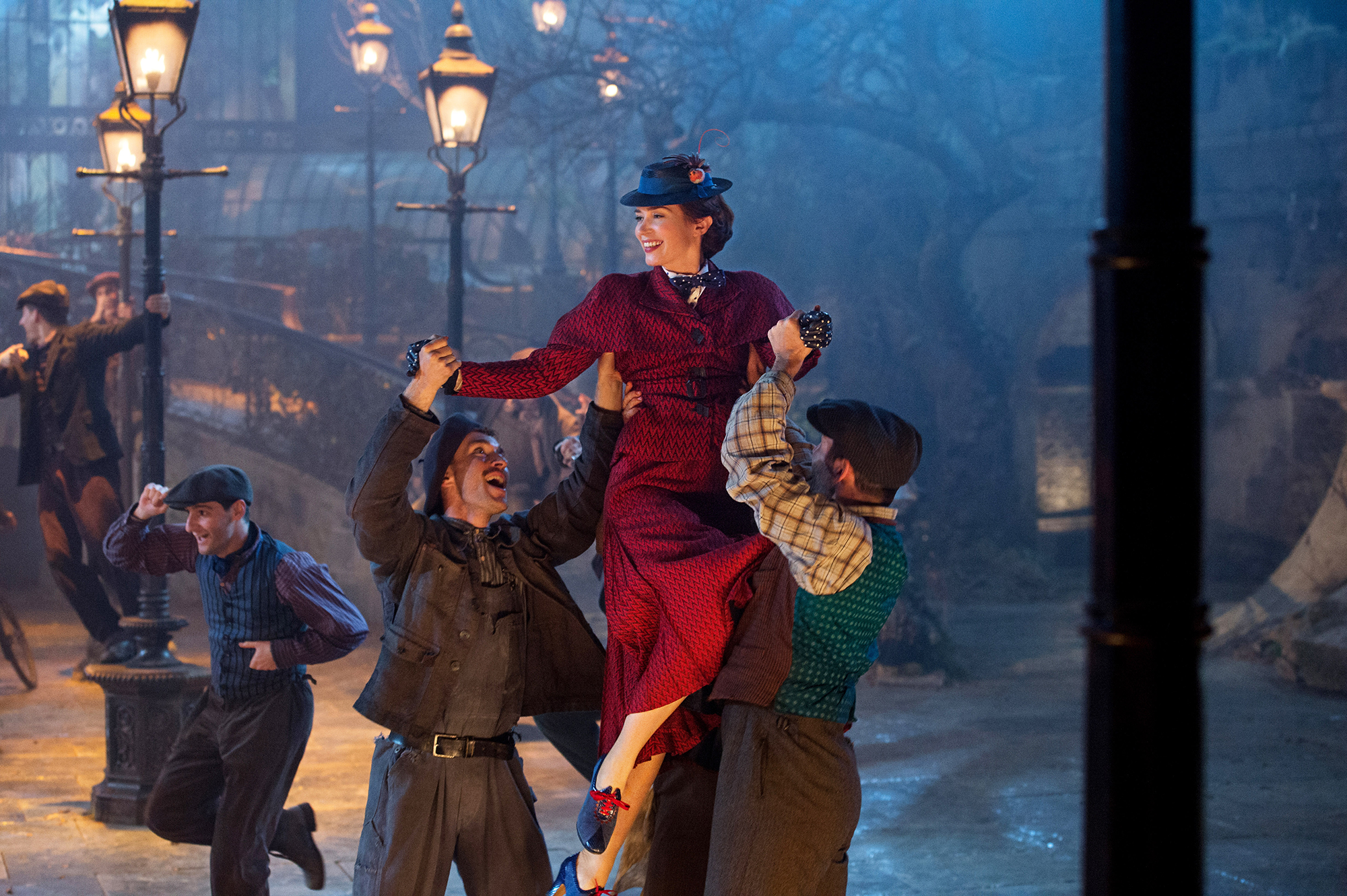 Dr. Seuss’ The Grinch
The Story Uh, do I really need to explain a story for this category? The Grinch with the tiny heart plots to ruin Christmas for the Village of Whoville.
The Buzz The Dr. Seuss classic returns to the big screen, this time in 3D computer animation. Benedict Cumberbatch voices the grump green villain; Pharrell narrates; Tyler the Creator supplies the music. This has got to be better than that joyless 2000 live-action version with Jim Carrey, right?
In theaters Friday, November 9

The Story A suburban couple (Mark Wahlberg, Rose Byrne) abruptly decide to foster three underprivileged siblings. Everyone’s lives are changed for the better.
The Buzz I know what you’re thinking, and this big-hearted crowd-pleaser — based on a true story — is much more self-aware than the similarly plotted The Blind Side. Plus, Wahlberg and Byrne are utterly convincing as ultra-weary yet conscientious husband and wife.
In theaters Friday, November 16

Widows
The Story After their crooked husbands perish during a heist gone awry, three widows (Viola Davis, Elizabeth Debicki, Michelle Rodriguez) and a friend (Cynthia Erivo) plot their own robbery to pay back the guys’ debts. Liam Neeson, Colin Farrell, Daniel Kaluuya and Robert Duvall also star.
The Buzz Yes! I saw this baby at the Toronto International Film Festival and annoyed the guy sitting next to me by audibly gasping throughout this gripping, tightly woven thriller. Unlike the thieves in the frothy Ocean’s 8, these women mean serious business. Expect nothing less from Gone Girl screenwriter Gillian Flynn.
In theaters Friday, November 16

Fantastic Beasts: The Crimes of Grindelwald

The Story Eddie Redmayne’s Magizoologist Newt Scamander unites with young Albus Dumbledore (Jude Law) to prevent devious Gellert Grindelwald (Johnny Depp) from raising wizards to rule over all non-magical beings.
The Buzz I’m hard-pressed to recall a single scene from the 2016 original. The cast and crew have said this installment is bigger . . . and better. The magical action also takes place in London instead of New York, which will please Potter heads. (Is that what they’re called????!!!!)
In theaters Friday, November 16

Ralph Breaks the Internet
The Story Six years after the events in Wreck-It Ralph, video game baddie Ralph (John C. Reilly) and fellow misfit Vanellope (Sarah Silverman) go from the arcades the wild, wild Internet.
The Buzz Ralph already broke the Internet thanks to that photo of Vanellope hanging with an all-star collection of Disney princesses. Fingers crossed Elsa sticks it to that lazy Snow White.
In theaters Wednesday, November 21

Green Book
The Story A world-class African-American pianist (Mahershala Ali) recruits a tough-talking New York City bouncer (Viggo Mortensen) to drive him through the Deep South in 1962. The two develop an unlikely bond on their travels.
The Buzz This fact-based comedy-drama entered the Toronto International Film Festival with little fanfare. Then it premiered, and it proved such a winner that it took home the coveted Audience Award. As if ace actors Ali and Mortensen would really sign on to a dud movie, lol.
In select theaters Wednesday, November 21

The Favourite
The Story In early 18th century England, Lady Sarah (Rachel Weisz) and an aristocrat turned servant (Emma Stone) vie for the affection of ailing Queen Anne (Olivia Colman).
The Buzz This ain’t your parents’ period piece. The opening night selection for the 56th Annual New York Film Festival, this high-brow comedy is deliciously tart and naughty — and it features three of the most tantalizing performances you’ll see all year.
In select theaters Friday, November 23

If Beale Street Could Talk
The Story Tish (Kiki Layne) and Fonny (Stephen James) are a devoted couple in Harlem with a baby the way circa 1974. Their dreams become derailed after Fonny is accused of a crime he didn’t commit.
The Buzz For his follow-up to Moonlight, Barry Jenkins chose to adapt this classic James Baldwin novel. Like his Best Picture Oscar winner, this tale is quiet and melodic. Regina King, as Layne’s mother, brings the fire.
In select theaters Friday, November 30

The Story The “Ben” in the title is a former drug addict (Lucas Hedges) who leaves rehab unexpectedly to spend the Christmas holidays with his family. Only his mom (Julia Roberts) is thrilled to see him.
The Buzz After Beautiful Boy and Boy Erased, it seems easy to dismiss this drama as just another struggling young man at war with himself and his well-bred family. This entry, which also premiered at TIFF, is the best the Troubled Trio. Special nod to Roberts, who brings humanity and warmth in her meatiest role since . . . jeez, Erin Brockovich is already 18 years old.
In select theaters Friday, December 7

Mary Queens of Scots
The Story Widowed Mary Stuart (Saoirse Ronan) attempts to overthrow her cousin, Queen Elizabeth I (Margot Robbie), only to face imprisonment and execution. Oh, right: 500-year-old spoiler alert!
The Buzz Frances McDormand bested those these ladies in the Best Actress Oscar category earlier this year. Now they’ve joined forces and upped the ante by starring in a gorgeously costumed period drama that will premiere at the upcoming AFI Fest. Nicely handled.
In select theaters Friday, December 7

Vox Lux
The Story Natalie Portman stars as a jaded, wildly successful singer who achieved fame as a teen in the aftermath of a school shooting. Then another act of violence demands her attention.
The Buzz If you loved Lady Gaga at the mic in A Star Is Born, then you’ll love Portman . . . welllll, maybe. Unlike that beloved musical-drama, this is a colder, more cynical look at pop stars — and the fans that adore them. Portman does impress performing Sia originals.
In select theaters Friday, December 14

The Story Thanks to a case of mistaken identity, a 40-year-old woman (Jennifer Lopez) stuck in a dead-end job gets a chance to prove to the suits on Madison Avenue that streets smarts are just as valuable as book smarts
The Buzz Lookie, it’s an old-fashioned comedy in a sea of stately Oscar films! Lopez’ latest vehicle was originally schedule for release in November, but it got bumped back a few weeks. Presumably so audiences can have their December dessert after devouring their meat and sweet potatoes.
In theaters Friday, December 14

The Mule
The Story A 90-year-old World War II veteran (Clint Eastwood) is caught smuggling $3 million worth of cocaine through Michigan for a Mexican Drug Cartel. Bradley Cooper co-stars.
The Buzz Oscar-winning director Eastwood is in back and in front of the camera for the first time since Gran Torino. Judging from the trailer alone (granted, always a risk), this crime thriller looks like a taut winner. Now get off my lawn.
In theaters Friday, December 14

Spider-Man: Into the Spider-Verse
The Story Miles Morales (the voice of Shameik Moore) is just your neighborhood Spider-Man in Brooklyn. In his spare time, he mentors a teen to become the next web-slinging superhero.
The Buzz Audiences that stayed through the end credits of Venom already saw a glimpse of this intriguing computer-generated Marvel film. Fans/geeks are stoked that this installment is set in the “Spider-Verse” where multiple Spideys exist. Semi-related: Venom. Venom! You guys have some explaining to do.
In theaters Friday, December 14

The Story The superhero from waaaaaay down under (Jason Momoa) is caught between the land-dwellers destroying the sea and the Atlanteans ready to revolt. His chief rival: his half-brother, Orm (Patrick Wilson).
The Buzz The well-muscled Aquaman didn’t exactly make a splash (ha!) in last year’s much-maligned Justice League. Perhaps this solo installment will finally be the D.C. Comics Universe adaptation that connects with audiences. If not, The Flash arrives in 2020.
In theaters Friday, December 14

The Story The iconic British nanny (Emily Blunt, taking over for Julie Andrews) swoops down on a kite to once again care for now-grown siblings Jane and Michael Banks (Emily Mortimer and Ben Wishaw), along with his three kids.
The Buzz The sequel features all-new music (from Hairspray’s Marc Shaiman), Lin-Manuel Miranda as Mary’s companion, and a special tap-dancing appearance from original co-star Dick Van Dyke. No wonder fans of the 1964 Oscar-winning classic — and if you’re not, bye-bye — have supercalifragilisticexpialodocious hopes that this fantastical Disney film will deliver.
In theaters Wednesday, December 19

Welcome to Marwen
The Story This plot is a bit tricky, so I’m cribbing it straight from the movie’s site: “When a devastating attack shatters Mark (Steve Carell) and wipes away all memories, he meticulously creates a wondrous town where he can heal be heroic.”
The Buzz Oh, you know, just your typical true story about how an art installation leads to a triumph of the human spirit. The X-factor is director Robert Zemeckis (Forrest Gump, The Polar Express, Flight), who’s a master at using visual gymnastics to enhance high-concept films.
In theaters Friday, December 21

Bumblebee
The Story In this nature documentary . . . psych! Yeah, I’m referring to a Transformers flick. Twenty years before the events of the first film, Bumblee the yellow autobot befriends a teen girl (Hailee Steinfeld) in a California junkyard. The two are soon on the chase.
The Buzz Here’s the fuel-tank-is-half-full outlook: After five noisy, borderline-incomprehensible installments (fine, the original was kind of fun), this franchise has nowhere to go but up.
In theaters Friday, December 21

The Story Famed Detective Sherlock Holmes and John Watson team up to investigate a murder at Buckingham Palace in Victorian-era England.
The Buzz One more thing: Holmes is played by Will Ferrell, and Watson is played by John C. Reilly. And the former Stepbrothers are primed to inject their goofy, imbecilic humor into the by-the-book proceedings. Metaphorically speaking.
In theaters Tuesday, December 25

On the Basis of Sex
The Story Young lawyer Ruth Bader Ginsburg (Felicity Jones) works with her husband Martin (Armie Hammer) to bring a gender discrimination case in front of the U.S. Supreme Court.
The Buzz Now this is a superhero origin story. Think of the drama as a lovely companion piece to the fascinating hit documentary RBG. Hope it’s not too disarming to see Ginsburg without a black robe and glasses.
In select theaters Tuesday, December 25

The Story For eight years, the most powerful and influential person in the world was a man named Dick Cheney (Christian Bale). This biting comedy illustrates how the former U.S. Vice President worked his political magic.
The Buzz Sky-high expectations. That’s what happens when Bale is cast as the lead, Amy Adams is wife Lynn Cheney, Sam Rockwell is President George W. Bush and Steve Carell is Donald Rumsfeld. And I’m talking Bale in unrecognizable, gained-50-pounds mode. So who’s ready to revisit recent history? Ultimately, the audience gets the deciding vote.
In select theaters Tuesday, December 25